Although Russia accounts for only 2.6 percent of India’s total trade, historically deep trade and investment ties between the countries are now under threat.

More than a month into the Ukraine war, India’s trade with Russia remains suspended after banking channels shut down following sanctions imposed by the US and its allies. A bulk of crude oil and diamond imports also hang in limbo as India is yet to officially allow trade in rupees or Russian roubles.

Bilateral trade with Russia stood at $10.75 billion in April-January, official data shows. Russia’s invasion of Ukraine started on February 24. Commerce department officials said trade for February and March will be minuscule because most shipments had been frozen.

Despite being a geopolitical ally and a close economic partner for long, India’s trade with Russia has fallen much behind that of other major powers such as the US and China. Russia is only the 25th-largest trading partner for India as of 2022, accounting for about 2.6 percent of the country’s total trade.

Now, 33 days into the Ukraine conflict, the historically deep trade and investment ties between the countries are under threat.

According to government estimates from 2019, there were about 300 registered Indian companies in Russia, almost all of which are involved in trading. Payments of $500 million to Indian exporters are currently stuck because Russian banks have been removed from global trade payment systems, according to the Federation of Indian Export Organisations. 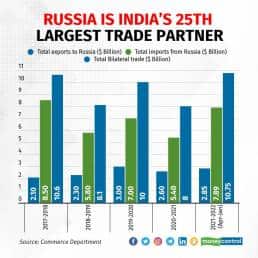 Moneycontrol had been the first to report on India's decision to hold back on initiating an alternative payment mechanism with Russia until the crisis eases. On March 28, the government informed Parliament that India was not considering buying oil from Russia or any other country using rupees.

Instead, New Delhi has decided to try workarounds once the active conflict ends and a resolution is reached by Russia and Ukraine. This includes routing transactions through smaller Russian banks that are as yet untouched by sanctions, and a selected barter system whereby both nations agree to exchange a set of commodities.

The series of western sanctions have effectively stopped all business transactions between Russia and India. On February 24, the Office of Foreign Assets Control, an agency of the US treasury department, asked all US financial institutions to close correspondent or payable-through accounts within 30 days and to reject any future transactions with two of Russia’s largest banks, Sberbank and VTB Bank, and their subsidiaries.

The country has also been cut off from a key global interbank system that facilitates transactions between banks from 200 countries. The Society for Worldwide Interbank Financial Telecommunication, or SWIFT, is the world’s leading provider of services related to the execution of financial transactions and payments between banks worldwide. Excluding Russia from the SWIFT network means banks cannot initiate transactions involving lenders or entities on the list.

Most Russian companies in India operate in the heavy engineering, energy and gas, and chemical sectors. Among them is Nayara Energy, formerly Essar Oil, which is 49 percent owned by Russia’s Rosneft Oil.

While Russia has offered to sell oil at discounted prices to India, the government has played this down. Earlier this month, it said more oil imports from Russia would still be a "drop in the bucket" when it came to total oil imports. 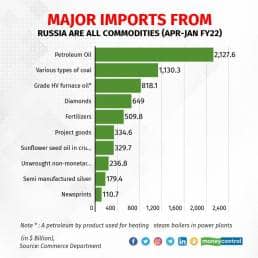 India bought about 12 million barrels of oil from Russia in 2021, only 2 percent of its total imports. In contrast, oil contracts for March and April have already reached 6 million barrels, according to data compiled by Kpler, a commodities research group. The five cargoes are currently en route to India and will be offloaded in early April.

However, the other important import from Russia–uncut diamonds–has completely stopped, according to industry executives. Alrosa, the state-controlled diamond producer, controls 90 percent of Russia’s diamond production and sold 30 percent of global diamonds in 2021.

India’s imports of raw, non-industrial diamonds are generally routed through the United Arab Emirates and Belgium. Of $14 billion worth of shipments in the first 10 months of FY22, only $649 million came directly from Russia.

The lack of diamonds has already triggered global speculation and a price rise.

“Russian diamonds not being sold at all will choke global supplies and may lead to job losses in the polishing industry, which is majorly concentrated in India,” the Gems and Jewellery Export Promotion Council said recently.

“Over the past one month, while the government assured trade stakeholders that all existing transactions would be sorted out, it also stressed that the latest sanctions by the US are more stringent than the ones directed against Iran earlier,” an FIEO official said. 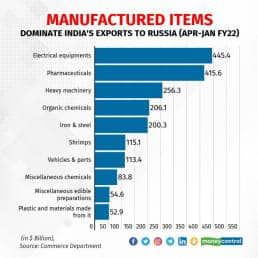 Indian businesses are still keeping an eye on US banking sanctions. The total sanctions have currently hit about 80 percent of the banking sector in Russia. On a daily basis, Russian financial institutions conduct about $46 billion worth of foreign exchange transactions globally, 80 percent of which are in US dollars.

However, the US has specified eight general licences that authorise certain transactions as well as trade in agricultural commodities, pharma, and petroleum. FIEO has told its member export promotion councils that India’s exports to Russia in these sectors would not be subjected to sanctions.