The Cabinet has extended the existing export-promotion scheme for textiles until March 2024 but experts say the sector, which is one of India's biggest job creators, needs more support to face fierce competition from rivals such as Bangladesh, Vietnam and Cambodia

General view of garments being stitched in a factory (Representational image)

The government’s decision to extend a major export-promotion scheme for textiles until March 31, 2024 has cheered trade bodies but industry insiders say more incentives are needed as the scheme has not been able to arrest the continuous decline in India’s apparel shipments even before the pandemic.

The Cabinet decided on July 14 to extend the Rebate of State and Central Taxes and Levies (RoSCTL) scheme to ensure policy stability and provide continued export incentives to apparel manufacturers and exporters. The scheme was introduced in March 2019.

Trade bodies such as the Apparel Export Promotion Council have also hailed the decision to continue the scheme on apparels and made-ups. However, industry insiders say the issues in the sector and the level of hit businesses have endured since 2017 should have ensured that benefits actually rose.

Garments manufacturing is the largest component of textiles, which in turn is the largest private sector job creator in India. But over the past decade, India has gone from being the 2nd to the 5th largest exporter of garments. 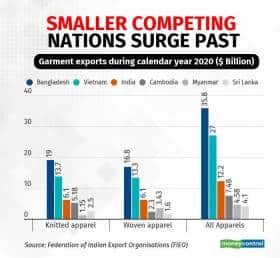 For calendar year 2020, industry figures compiled by the Federation of Indian Export Organisations (FIEO), showed that while India exported $12 billion worth of apparels in 2020, once close competitors Vietnam ($27 billion), Bangladesh ($ 35.8 billion) have raced well ahead. Even tiny Cambodia has exported $7.3 billion and ships more than India in certain categories.

"Many neighboring countries have emerged as our competitors having tariff advantage either on account of Least Developed Country status or owing to effective free trade agreements," FIEO President A Sakthivel said.

Industry insiders say the sector has continued to face a slew of continuous challenges over the past few years. "First the industry took more time than others to adjust to the Goods and Services Tax regime, the continuous downward revision of export incentives, and the ever present working capital challenges since 2019 has curtailed exports," said a functionary of industry body Ficci.

India faces challenges in global trade and rising competition, especially in the form of more shipments at lower costs from regional competitors. According to the World Trade Organization, Bangladesh's export of apparel more than trebled between 2008 and 2018.

Also, even before the COVID-19 crisis, demand from key importers and particularly, the UAE, had gone down drastically, say exporters. The trend started in late 2018 with many new manufacturing units coming up in free market zones in the UAE, which prefers to source raw materials from India as opposed to finished goods. Apparel exports have fallen for the past 4-straight years

The Central Board of Indirect Taxes and Customs (CBIC) had also slashed duty drawback rates on cotton, man-made and blended garments. As a move to provide relief to the industry, the RoSCTL was launched.

Ever since COVID-19 struck India, the government has announced a single new measure for the sector as a whole, the extending of the Rebate of State and Central Taxes and Levies (RoSCTL) scheme. In place since March, 2019, it provides benefits to exporters in the form of duty credit scrips similar to existing schemes.

But, it does so while rebating all embedded state and central taxes on paid inputs. This includes VAT on petrol, mandi tax, electricity duty, and stamp duty on all export documents, among others.

"The extension of RoSCTL benefit coupled with free trade partnership with US, UK, EU, Australia, Canada, etc. would be a game changer for Indian apparel and made-ups sectors and will help the sector to get its rightful share in the global trade," Sakthivel said.
Subhayan Chakraborty
Tags: #apparel #export #garments #textiles #trade
first published: Jul 15, 2021 02:19 pm