Rumit Duggar of Religare Capital Markets speaking about the Infosys second quarter numbers said although the quantum of weakness in second half could be higher than anticipated, the constant currency growth could be marginally higher for the full year at around 13 percent than the 10-12 percent guided by the company.

Margins for the company would continue to remain in the 25 percent range backed by incremental investments into new areas, new geographies.

However, for the share price to show a substantial pick up there is a need for more earnings upgrade. Near-term the stock would be range bound but medium-term it depends on performance in second half and earnings upgrade.

Below is the verbatim transcript of Rumit Duggar's interview with Reema Tendulkar & Nigel D'Souza on CNBC-TV18.

Reema: Are you surprised that the company has not raised their full year constant currency growth guidance of 10-12 percent and what does it tell you how the second half of the year is going to be for Infosys worst than what you were anticipating?

A: It is a negative surprise that despite such a strong first quarter followed by a very strong second quarter there has been no change in the constant currency guidance. However, that said there is an element of seasonality that we need to factor in. Thus it does look like the second half is going to be weaker but clearly the quantum of the weakness seems much higher than the market anticipated.

Nigel: What are you factoring in for the second half of the year, give us some numbers. What exactly are you looking at? Are you expecting a flattish performance? Are you expecting some de-growth? Could you tell us Q3 and Q4, just a rough range if you could give us? 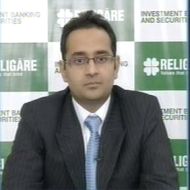 A: We do think that they should do slightly better than their guidance which is basically implying a negative 2 percent to a flat quarter, so we are building in about 1 to 2 percent kind of growth. However, also consider that there was USD 23 million sort of, onetime revenue, which won’t be there so if you adjust for that then yes, we should still expect 1-2 percent growth.

Reema: That would imply that for the full year their growth will be more than 12 percent in constant currency terms? What would your estimate be?

A: It would be marginally higher than that.

Reema: What is your exact number on FY16 dollar revenue growth in constant currency in reported as well as earnings per share (EPS)?

A: For full year our EPS number is 57.50 for this year and we are building in about 9 percent dollar growth.

Nigel: In terms of pricing may be in the last one-one-and-a-half month or so there was lot of talk that pricing could be under pressure etc. But that as well has pleasantly surprised. I mean how do you understand this particular data point - pricing is their pressure, isn't their pressure, is there something related to fix pricing that really help them out this time around. What is your take on that?

A: There is generally pressure on the traditional services and barring this quarter if you see their realisations have been going down and I think even for next year there will be some drag because of the residual price declines that you have seen for the last two to three quarter. So, I don’t think the pricing in the sector is going up. I think there is an element of mix change, there is an element of revenue productivity which is sort of helping offset the impact. However, I think on the traditional side you are going to see continuous price erosion. May be the quantum may be slightly lower.

A: In this quarter, yes.

Reema: So what explains that and is it sustainable?

A: As I said there are two elements. There is an element of productivity and there is an element of revenue mix. So, when you look at pricing and you say that it has gone up by 2 percent that is on a blended basis. However, there will be still certain pockets where pricing would have declined and there will be certain pockets where they are doing higher value add businesses etc and there the pricing realisations are much better. So, you can’t paint everything with the same brush and say that pricing has gone up across the board. I think it is more mix led and productivity led.

Nigel: If pricing could come under pressure may be in the second half or so the margins were particularly good this time around. 25.5 percent would be at the upper end of the band. We had visa cost that were lower, rupee depreciation as well played its part. Were you impressed with that? Do you expect them to maintain that or may be pricing comes under pressure and they fall back to around 23-24 percent or so?

A: There was this one time revenue. If you remove the impact of that then margin are still improved; partly helped by the INR. So, we expect margins to remain in that 25 percent kind of band. I think that incremental growth they will continue to invest as the management has been continuously saying in new areas, in new geographies in some of these platforms. So, those investments will continue so we don’t expect a material shift in the margin trajectory.

Reema: What happens to the stock from here on? How do you expect it to move?

A: In the near term the stock is likely to remain range bound but over the medium-term the key would be how well they perform in the next couple of quarters and how much earning upgrade they are able to drive. So, you need to see more earning upgrade for the share price performance to pick up from where it is right now.