In an interview with CNBC-TV18‘s Kritika Saxena, CEO Vishal Sikka that a combination of factors drove the results: higher volumes, deal wins as well as innovation-led efficiency improvements.

In an interview with CNBC-TV18’s Kritika Saxena, CEO Vishal Sikka that a combination of factors drove the results: higher volumes, deal wins as well as innovation-led efficiency improvements.

“Revenues have started showing from new areas and we are confident of achieving USD 20 billion revenue and 30 percent margin by 2022,” he added.

At the same time, declining major concerns on the US visa hike, UB Pravin Rao, COO of the company said that impact of this reform will be less on individual IT companies as the hike will be much below USD 50 million and it applies only to new visas. 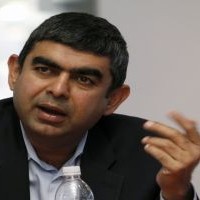 Talking about deal pipeline, COO UB Pravin Rao said the company’s deal pipeline is strong across clients, barring telecom and energy. He also spoke about the recent US government decision to hike H1B visa fees, and said the impact of the move will be marginal -- about USD 50 million.

Newly-appointed CFO MD Ranganath said the company’s margins fell by 60 basis points but contended that the company “navigated challenges very well” this quarter. Going forward, a combination of levers such as utilization, on site mix and low employee costs will help boost margins, he said.

Below is the interview transcript of Infosys management with Kritika Saxena on CNBC-TV18.

Q: What factors according to you have contributed towards the results reported in this quarter?

Sikka: Last Q4 was a surprise, but a negative one. The three quarters after that have been good. I think there is a combination of things that play here, the grassroots innovation that we have worked on, zero distance and so on which has started to create a very positive atmosphere of confidence and energy and bringing innovation to every project that we do. And in parallel, the new areas that we have been working on, the AiKiDo services and so forth, they are all starting to kick in and starting to show results.

So, all of that has created a sense, in our sales team for example, the dialogue, the nature of proposals, we have become more effective in that. Our win rates have increased significantly, our volume has increased, so a combination of all of that gives us the confidence that what led to the increase in our guidance for this quarter for the current financial year. From 10-12 percent in constant currency to 12.8-13.2 percent. I realise that the low end of the new guidance is above the high end of the previous guidance, but we feel comfortable with that based on the visibility that we have. And on the back of that I believe that we feel comfortable that we will get to industry leading growth in the year that is in from of us.

Q: What is the current state of your order pipeline?

Rao: The pipeline is across sectors barring telecom and energy to some extent. We are seeing strong pipeline in financial services, we are seeing strong pipeline in retail and consumer packaged goods (CPG), manufacturing to some extent. With respect to recovery in the oil and gas, it is difficult to predict, because about six months back, we though the oil prices had bottomed out, but again the further decrease in oil prices. So, the industry view is we can continue to expect volatility at least for the next year or so.

Q: It is your first quarter. As a Chief Financial Officer, you are an old hand yes, but you have seen Infosys through every possible up and down. Going ahead now, as you enter 2016 and FY17, what are the margin levers that you have and 24-26 percent is the margin band, can you inch it further? You said there is scope for operational efficiency so, maybe 26 percent plus in FY17?

Ranganath: This is the 20th time today somebody is reminding me that this is my first quarter. It is almost, as I said earlier, it is like first love, first quarter which is always very exciting, but there are always ups and downs. However, I think we navigated this quarter very well. And, coming to the margin question, the first none months, our operating margins is 24.8 and this quarter of course, it dipped by 60 basis points as compared to the previous quarter.

And Pravin earlier talked about the productivity improvements and some of the automation improvements and Vishal has challenged us on the per capita revenue. These are all the key initiatives that we have in the company to see how we could work on the margins. But, our profit after tax (PAT) still remains 25 percent plus or minus one.

Q: Infosys’ acquisition strategy has been very categoric in acquiring niche companies with digital focus. So, going ahead, what is the kind of bandwidths you have to be able to invest in acquisitions to be able to spend and maintain margins?

Ranganath: If you look at our cash generation has been healthy and stable. Even after the dividend payment, we have USD 4.7 billion, a little over Rs 31,000 crore. But more importantly, if you look at our acquisition strategy, we said that look, we do not have a spend target. Look, we had to spend 500-600 billion, we do not have that spend target. Essentially, acquisition is all about is there a company that makes a strategic fate for our renew and new. For example, the three acquisitions that we have had, they are all small ones, at the same time, they can give us a huge multiplier effect, their software based acquisitions.