Anjan Chatterjee, founder and MD of Speciality Restaurants says the fourth quarter so far is panning out to be flattish since discretionary spends are not very encouraging

Despite brands such as Mainland China, Oh! Calcutta, Sigree and Sweet Bengal, among others, in its kitty, Anjan Chatterjee, founder and MD of Speciality Restaurants says the fourth quarter so far is panning out to be flattish since discretionary spends are not very encouraging.

"We are working with cautious optimism and trying to consolidate existing bottomline with revenues. Additionally, even food inflation is going out," he told CNBC-TV18.

Meanwhile, Amit Jatia, vice-chairman of Westlife Development, says in the last six months, with all the brand work done, more and more consumers are visiting McDonald's.

Jatia intends to open 30-40 restaurants in FY17 and is seeing increased consumer footfalls.

Below is the verbatim transcript of Anjan Chatterjee and Amit Jatia’s interview with Latha Venkatesh and Reema Tendulkar on CNBC-TV18.

Reema: For the industry per se, I am not talking about your company in particular, the same store sales growth (SSSG) has been fairly sluggish, discretionary spend has been on the lower side. How has Q4 panned out for you, how much better is it compared to a year ago, how would you compare it to the last quarter?

Chatterrjee: It is flattish and I would say that because the fact that you rightly said that the discretionary spends are not something which has been very encouraging for us and we have been going with the cautious optimism of the fact that the number of stores we had opened, maybe last year in this fiscal, we are actually going to be looking at this a little slow because the fact that we are not getting any vision at this point of time. However, we are trying to consolidate our existing revenues and also the bottomline.

Latha: Your per unit cost is much lesser and with the food inflation numbers also working to your advantage have you seen any improvement in the off take, same store sales volumes in Q4?

Jatia: While I cannot talk about the Q4 since our results are not yet announced, but I can tell you that in the last six months, especially with all the brand work we have done, and pretty much a different strategy that we have adopted, it has been working for us and we are seeing more and more consumers coming and visiting McDonald’s. We were happy that last quarter we released a same store sales growth of 3.1 percent which was higher than the 1.7 percent that we had in the previous quarter.

However, in today’s world, a positive comparable sales growth have been sort of rear and therefore we were quite excited to see that. We are seeing trends like that continue in Q4 but more on Q4 once we announce our results. Our view has always been that the QSR industry is nascent and growing and along the way in the economy, there will be ups and downs and we don’t change our strategy based on a short-term blip in the economy. We have consistently grown our number of restaurants; we have consistently tried to take long-term view with brand advertising, investing back in reimaging and McCafé.

So, just over the last two years, in reimaging and McCafé, we have invested over Rs 125 crore and we are beginning to see results of all this work from a consumer point of view. So, we are quite bullish about where we are heading and I agree that consumer sentiment continues to be a bit weak but at least some of our strategies around reinvestment are working for us.

Latha: When you say 3.1 percent, was that a quarter-on-quarter (QoQ) rise or was it a year-on-year (YoY) rise?

Jatia: Same store sales are always YoY so you look at the same period in the previous. So, it is over the previous year.

Latha: I am asking you because Q4 last year was not a good quarter for you? It was a - 4.8 percent in terms of rate of growth, I don’t have the actual numbers right away, so, you look positive because the base is so bad but are you actually seeing more off take?

However, to answer your question, yes, we are seeing at least some improvement in the numbers that we have been able to observe based on consumer footfalls. Especially what is working for us is McCafé, our delivery business, so these are new occasions that McDonald’s is offering its customers and this is adding to incremental visits and incremental sales for us.

Reema: If you could just tell us if this quarter, Q4, is better than what we saw in Q3 qualitatively at least if you could tell us? We are just trying to gauge if the consumer sentiment has improved favourably?

Jatia: As I mentioned before, it is hard for me to give yup specifics but generically I can tell you that QoQ, we have been sort of moving in an improving trend of same store sales. So, at least from our point of view, we had mentioned that we have bottomed out two quarters away and therefore the trend for us continues to be in the direction that we have seen in the last two quarters. So, we are quite happy to see the progress.

Reema: So that is an improving trend?

Jatia: Yes, it is an improving trend.

Latha: Overall have margins improved, I would assume that you will be able to renew leases at a slightly lower level at least and you were talking about food inflation.

Chatterjee: That is a point I was saying that we are looking forwad to food inflation going down because unlike a QSR we are importing a lot of stuff which are coming in from China. So, I think because the dollar fluctuation we have been hit very badly, so, over a period of time if the perishables in the form which we get within the country, if they balance it out, maybe we will have an offset there.

Amit said an very interesting point that if he is talking about the QSR being at a nascent stage, I would say that fine dining is actually primitive here. In fact in India the fact that people actually going out which is a weekend phenomenon which is becoming now weekday sometimes and actually if we get our Monday’s, Tuesday’s what happens in India, in Monday’s the people fast – I am talking about – we are a family dining. We have been balancing our act with new stores which are fun dining, balancing the fine dining and fun dining which is in the formats of Mainland China, Asia Kitchen, Hoppipola and Café Mezzuna. We have got very encouraging response where we have been able to leverage the operational leverage we have taken because it is an all day dining – breakfast to dinner.

So, this has been identified by us but in the long-term, very rightly said that we are not a short-term company, we have been here for 21 years and I think these ups and downs in the economy will have to absorbed and we have shock absorbers. We are a debt free company with almost Rs 70-80 lakh crore lying in the bank and maybe going forward as the economy turns a little, I am quite confident of the fact things will improve.

Latha: Is the economy turning a little that is the real question. Can you feel it in your footfall?

Chatterjee: I don’t know what Amit has to say but I can surely tell you that it has been a fluctuating QoQ but I don’t see a consistent consumer footfall.

Jatia: I agree with that. What we are seeing is that on certain occasions, we do really well. So, if there are holidays for example, there is end of season sale, there is a great movie that has come out, we are seeing people come out. However, it is not consistent day-on-day. So, I agree with what Anjan is saying. I think there is still a little more work before the economy fully recovers.

Latha: What are your expansion plans, how many new stores in FY17?

Chatterjee: We are looking at as I said cautious optimism. I don’t think we will be doing 12 or 14 this year and at the moment we have not decided the number of stores but definitely I can say that we are not going to be doing a 12-14 but it may be slightly more moderate and what is happening is that as we consolidate on the existing stores and try and extract more bottomline from there, that is also a very important thing because fine dining is much more difficult than any other category which is in the form of a QSR because it is not a template which you replicate although we synergise the décor, etc.

So, it is specific location-to-location, city-to-city. Some of the cities have not worked very well, we have shut down stores over a period of time so we are trying to consolidate and see a picture. Going forward in FY17 where as we get a little more tailwind from the consumer spending, we will be able to consolidate.

Latha: One word on your expansion, how many stores?

Jatia: We continue to expand as we have before. So, in FY17 we intend to open anywhere between 30-45 restaurants. Our plan over the five years is to invest about Rs 750 crore and sort of double the base of restaurants that we have today. So, we believe that while today there is a bit of a slowdown in the market, we have always maintained that it is about long-term but sustainable growth with solid unit economics, good location selection and as long as we get great locations with the right terms, I don’t think that we are going to sort of slowdown. However, neither are we as aggressive as some of the other peers that we see, so, you will see us do about 30-40 restaurants a year. 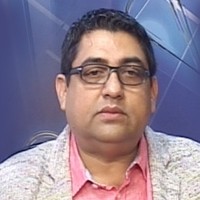 Anjan Chatterjee
MD|Speciality Restaurant
Get access to India's fastest growing financial subscriptions service Moneycontrol Pro for as little as Rs 599 for first year. Use the code "GETPRO". Moneycontrol Pro offers you all the information you need for wealth creation including actionable investment ideas, independent research and insights & analysis For more information, check out the Moneycontrol website or mobile app.