Even as petrol and diesel prices move closer to their highest level in three years, Petroleum Minister Dharmendra Pradhan met the heads of oil marketing companies (OMCs) and assured them that there will be no intervention and the "market-driven" mechanism will continue to determine prices. In an interview to CNBC-TV18, MK Surana, CMD of HPCL spoke about the latest happenings in his company and sector.

Even as petrol and diesel prices move closer to their highest level in three years, Petroleum Minister Dharmendra Pradhan met the heads of oil marketing companies (OMCs) and assured them that there will be no intervention and the "market-driven" mechanism will continue to determine prices.

In an interview to CNBC-TV18, MK Surana, CMD of Hindustan Petroleum Corporation Ltd (HPCL) spoke about the latest happenings in his company and sector.

Company making a marketing margin of Rs 1.50-2 per litre currently, he added.

Company has to incur all expenses when operating petrol pumps, said Surana. 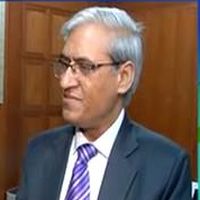 Dealer commissions have changed, international prices are impacting domestic prices. There has been an increase in the cost of operating pumps, he further mentioned.

Deven Choksey, MD of KRChoksey Investment Managers also shared his views on the same as well as gave recommendations on few stocks.

“We continue to hold long position with Reliance Industries and we believe that it would be a favourable play”, Choksey said.

Below is the verbatim transcript of the interview with MK Surana.

Latha: There is a lot of angst from customers across the board as you can see on the electronic media, what exactly is the strategy that the minister advised or you all are arrived at, will you all be willing to sacrifice the bit of your marketing margins to assuage customers?

A: I think honourable minister has already said yesterday in the news also that the decision of keeping the actual prices aligned to the international prices will continue. So there is no change to that effect. In fact, various news items are there regarding increase or decrease. So whenever you align a market to the international market, whenever the prices are falling, it will align to the downward trend. Whenever it is increasing, it will align to the increasing trend. So we cannot say only one side when it is increasing, it is not good, going down it is good but there were also impact of some natural events like two cyclones in US, which firmed up the prices etc which maybe the immediate impact but going forward, it may get it more evened out.

Anuj: Since August 2, there has not been a single day when prices have been lower. Are you saying that since that day every day international prices have gone up and one more point, the marketing margin right now is Rs 4.5 per litre according to that price build up. It used to be Rs 2-3 till one year back. So are you now making Rs 4-5 litre marketing margin?

A: I don’t know which figures are you looking for.

Anuj: I am looking at Indian Oil Corporation’s (IOC) price build up where the refinery transfer price on landed basis in Delhi is Rs 26.65 paise and price charged to dealers is Rs 30.70 paise. So that makes the marketing margin of Rs 4.05 paise that used to be Rs 3 or Rs 2-3 till about one year back.

A: Yes but one year or two years or whatever, the reserve margins have also gone up. Second part is, the secondary distribution after transportation cost also changed. So one thing I want to tell you that when the price build up is there and the prices are going up, it does not necessarily mean that the margins of the marketing companies are going up because it gets built up right from the international prices of the product and onwards. Now it is not a cost plus model to that extent that every cost which we incur is purely got built up in the process. So there is international price of the product, there is international price of the crude and the difference is the total available in which all the costs have to be managed.

So I don’t think that there is a built up in the margins from the last few months or so which is increasing the prices anyway. There are certain cost – there is definitely a revision that was overdue for a long time. There is a change in the money, wages which is being paid to the boys, which changes from state wages to the central wages across India and there was a change in central wages of around 49 percent by the government. So all these prices do get transferred in the pricing mechanism but the pure margin of the company is because of the increasing volumes of the company and there are increasing throughputs of the company in the refineries which gets to the profitability.

So we should be clear about two different aspects. One is the per litre margin which the marketing company gets, second is the profitability of the companies and also the end retail price which is a combination of what the prices are moving in the international market and which are the additional cost decided to be incurred because of the overall pricing chain, maybe increasing the wages of the boys or the diesel commission.

Surabhi: We agree that there cannot be a linear correlation, there are different aspects like wages as you explained and that model has changed but just for the record, what is the marketing margin that you currently enjoy?

Latha: Irrespective of what the minister said yesterday in the conference and on camera, did he at least hint to you all that given the public ire, you will hold back at least – prices have been moving up every day since early August?

A: The prices are decided based on the movement of the prices in international market and from June 16, when the decision was taken to move the daily pricing – to get you some hints on that – on June 16, the price was less than 55.5 but start of July, it was 63.10, that was down of almost Rs 2.42. Then it increased. So in initial days, for almost 18 days, it fell continuously and then there was an increase because of two-three reasons. One thing was the some of the US refineries took the shut down then the two cyclones came and it did drive up a prices a little bit but now the impact of the cyclones will be reducing. The US refinery which has gone to shut down will come back. I think there was almost a 13 percent reduction throughput from the US refinery during the same period.

Anuj: Decline was from 66 to 63 and the hike has been from 63 to almost 71 and once again getting back to the marketing margin point -- just to understand you have a lot of company owned company operated petrol pumps as well and the dealer commissions have also gone up from Rs 1-1.5 to Rs 3 now. What happens in cases of pumps where companies themselves are owning and operating these petrol pumps? That adds to your margins?

A: What about the expenses which are to be incurred.

Latha: But rents have fallen in the last couple of years?

A: No, there is no fall in the rent because the petrol pumps are normally the premium site and the rent do not fall on the day-to-day basis like we are not deciding the rent of the places on a day-to-day market.

Latha: What is the reason for it to increase? It is just that we have no choice, so you can keep on increasing dealer commissions, no questions asked?

A: No, but what you do not understand is that the marketing expenses have been going up, even the dealer incur some expenses in running his business but that has not been increased for a long time. This has been the item which was being discussed for a long time.

So what I am trying is we need to have a rational assessment of the situation which – to sum it up the whole thing – there is a change in the international prices, there is a change in the dealer commission because of the marketing cost, the whole prices between what yo u considered ...to this is not the profit of the marketing companies, there is a distribution cost when you have got a company owned petrol pump or dealer owned -- irrespective of it, there is a cost which is incurred, there is increase in the wages of the boys which is the decision which has been taken to put more money in the hands of people. So it may improve the services.

At the same time, if the government has decided to raise the central wages by 49 percent, we are honouring it and the decision which has been taken is all over India will do get central wages. So the question is there is increase in the cost of operating and a part of that maybe coming to the whole increase.

Anuj: You have stuck your neck out and you have been candid in past, do you think this whole game, when prices went up three or four years back, when the prices were freed up, the entire burden was passed on to consumers, but now when prices fell, a lot of that was eaten up by excise duty and by state taxes. In Maharashtra for example, when you last cut prices because of that big decline in prices, immediately there were two VAT hikes if I recall it, and that sort of ate up the entire benefit that you passed on. Do you think it is fair right now, or do you have some kind of suggestion for both state government and central government?

A: There are two ways we can look at it. Either we say that it is a controlled regime where there is specific fuel price at which the products will be available to the end consumer or it is a free pricing or internationally recommended prices. So that is one aspect. That is a decision which has to be made and over a period as the models mature and the economy matures, those decisions are taken by the government. That is one part of it.

So if the government decides that there is something which they need to spend on a certain item of the society, now that revenue has to be culled up from somewhere and that is the reason again the government has to tell that which will be that source of revenue where they will get the revenue from. So it is a question of basically balancing the budget of the government and that is I think the prerogative of the government that they have to decide.

However, my understanding is that probably the government have got the priorities to utilise the funds for particular schemes for the larger interest of the people and for that they need the revenues and for that various sources of the revenue. Now this is the difference which government has taken that from where they will cull this up.