172@29@17@249!~!172@29@0@53!~!|news|business|companies|disappointed-with-gst-rate-on-ayurvedic-medicines-says-dabur-2287475.html!~!news|moneycontrol|com!~!|controller|infinite_scroll_article.php!~!is_mobile=false
Subscribe to PRO at just Rs.33 per month. Use code SUPERPRO
you are here: HomeNewsBusinessCompanies

In an interview to CNBC-TV18, Sunil Duggal, CEO of Dabur India spoke about GST and the latest happenings in the company.

India's tax regime is set for a sea change as the goods and services tax (GST) era unleashes in the country come July 1.

In an interview to CNBC-TV18, Sunil Duggal, CEO of Dabur India spoke about GST and the latest happenings in the company.

Surabhi: Start by talking about your company because it seems that in general consumers as far as hair oil is concerned, toothpaste is concerned and even fruit juice. It is either beneficial or neutral but particularly for Dabur how much will you end up saving in terms of lower tax? 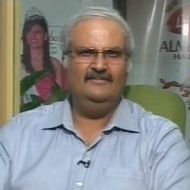 A: In oral care and in hair oils, we pay approximately 24-25 percent and it will come down to 18 percent, so it brings saving of 3-4 percent but the precise quantum of saving can only be ascertained once we know the input credit etc which will be applicable. So there will be some savings. We do not know exactly how much. We are working on that and will know in couple of days.

Juices are pretty flat. It was around 11 percent earlier. It is 12 percent now, so not much of a change. The only downside is in Ayurvedic medicines which came as a bit of a surprise. Today we are paying rates between 5 and 11 percent and this ramp up to 12 percent. We believe that the government should relook at this. Ayurvedic medicines are part of the government's agenda to promote indigenous medicines and this would definitely mean that there would be increases in prices. So we would look to have some relief there.

Surabhi: What about excise benefit because you were enjoying certain benefits, geographical benefits. They will no longer be available with the company is what I imagine?

A: We believe the excise benefits would be grandfathered, so there would be no implications in terms of central GST. Therefore, I do not think there would be any difference but we are still reading the fine print, if there is anything which we have missed here but as of now we do not think so.

Reema: Any ballpark figure on how much you could perhaps save on taxes?

A: We will know only by today or tomorrow. We are doing the fine print here. We have a meeting later in the day. I think it won't be anything significant. I do not think it will have a material impact on this year's results because there would be some dislocation consequent to GST, so there will be some negative elements coming out too. So I do not think there would be any change in our outlook for the year.