The spot gold-silver ratio was at 73.79 to 1, indicating that silver had outperformed gold

Silver prices edged higher near to Rs 66,000 per kg on October 25 tracking a positive trend in gold and industrial metal. The precious metal has risen by Rs 2,385 or 3.77 percent last week on the MCX.

Silver traded in the positive territory after a gap-up in the afternoon session, tracking the subdued global trend.

The precious metal has been trading higher than the 5, 20, 50, and 100 days' simple moving averages but lower than 200-day moving averages on the daily chart. The momentum indicator Relative Strength Index (RSI) was at 68.47, suggesting a buy in the price.

According to data from CFTC, speculators raised net long positions in Comex silver by 14,636 contracts to 19,608 in the week to October 19.

Silver holdings in iShares ETF remained unchanged for the third day at 17,000.01 tonnes. The fund NAV is trading at a premium of 0.08 percent.

The US dollar index was marginally up 0.13 percent at 93.75 against the major currencies in the afternoon session.

The spot gold-silver ratio was at 73.79 to 1, indicating that silver had outperformed gold.

The value of December and March’s contracts traded, so far, is Rs 727 crore and Rs 29.43 crore, respectively.

NS Ramaswamy, Head of Commodities, Ventura Securities said, “After long consolidation phase, MCX SILVER prices have managed to close above the key moving averages on daily chart. Prices are now trading above the 100 EMA level on daily chart on closing basis which is now seen near Rs 64,300 level. It will act as immediate support for the prices. On the upside, MCX SILVER prices will face resistance at Rs 66,300 level, breaking above which prices are likely to head towards Rs 70,000 level in coming sessions.” 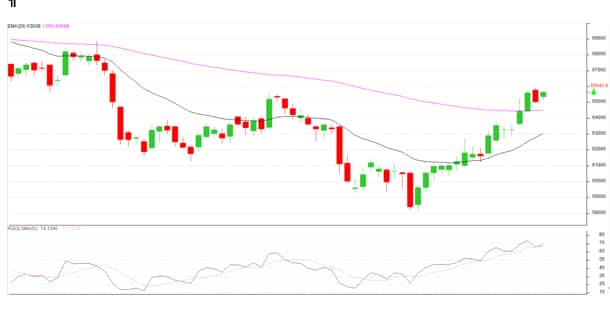