A number of representations have been made to the Coal Ministry by a host of power producing companies as the government plans its annual budget.

Power producing companies are mounting pressure on the Indian government to reduce what they claim are excessive taxes on coal, which is making electricity expensive for the end users.

A number of representations have been made to the Coal Ministry by a host of power producing companies as the government plans its annual budget, it is reliably learnt.

A top source within the Coal Ministry said representations have been made by companies to explain how various levies and charges almost doubles the fuel prices for the coal fired power projects that have to pass on this burden to the consumers through regulatory process.

According to the experts in the sector, the present tax regime in the coal sector is distorting the budgeting systems for states and centre.  Heavy tax structure on coal is compelling the state governments to cough up more for the subsidies on electricity tariff to the agriculture sector and weaker sections of the society.

The move comes at a time when Indians are paying all time high for petrol and diesel. According to estimates, taxes and other charges account for 60-70 per cent of the petrol and diesel prices. Energy consumers are paying high levels of taxes on their electricity like liquid fuels too.

The companies, said the source in the Coal Ministry, made presentations on issues of both direct and indirect taxes. The companies have also stressed on the need to establish a coal regulator on the lines of the electricity regulatory commissions to implement regulations relating to pricing of coal.

A Coal Ministry spokesperson refused to comment on presentations made by the power companies.

“The idea is to make the government aware of the implications of power costs in India. Power cost in India has shown a constant high trend despite the loss reduction and tariff rationalisation measures undertaken by many states,” Ashok Khurana, who heads Association of Power Producers (APP), told MoneyControl.

Khurana, who was former Additional Secretary for Power to the Indian government,  said one of the biggest factors behind this rise in costs of power is high taxes and duties of coal and its transportation from the mines to the power plants. Power companies have told the Coal Ministry that the high taxes are causing tremendous pressures on the prices of power which the companies have no option but to pass on to the consumers. SECL, which accounts for a majority of coal supplies to the power sector, the total mark-up over the basic price of coal is 94 percent. “This is actually doubling the price of the coal. And a major chunk of this mark-up is the GST component. And then there is CIL’s levies (crushing charges, surface transportation charges and coal evacuation charges). Even leaving apart the Royalty component that mostly goes to the state where the coal is mined, there is mark-up of as high as 75 percent over the basic price,” said Khurana.

There are other problems also for the power producers.

In those meetings with Ministry officials, the power producers said the installation of emission control equipment needed for thermal power plants to achieve new emission norms specified by the Environment Ministry will result in additional burden on the consumers. Additionally, power companies in India also have to account transmission losses and increased auxiliary consumption in their cost structure.

Seasoned power expert Rajiv Aggarwal said there is an immediate need to rationalize the level of taxes and duties on coal which is the major input of India’s primary electricity generation source. Aggarwal coal purchased by power generators from coal mining companies attracts a GST of 5 percent. Over this, a GST Compensation Cess of Rs 400 per tonne is levied. And then, freight charged by the Indian Railways for transport of coal from mines to the plants entails a further GST of 5 percent. “The power generator ends up paying all these taxes, but cannot claim any input-tax credit on the tax paid. This entire amount is passed on by the generators to the Discoms as there is no way they can recover taxes and cess paid on coal and coal transportation.”

The numbers are huge, as explained in the data computed below. A copy of this data was shared with the ministry.

The power producers explained to the ministry officials that the entire GST incidence of Rs 25,000 crore is passed on by the generators to the discoms and eventually to the final consumers of the electricity.

India’s electricity tariffs, especially for business and industrial users are amongst some of the highest in the world. Experts say there is a compelling case for inclusion of electricity under the GST regime. It will help reduce costs for manufacturing, thus improving competitiveness of Indian industry. “The ministry must allow reduction of the cross-subsidization of electricity tariffs that further undermines the competitiveness of Indian manufacturers and exporters. This might lead to an immediate fall in revenues of both the Centre and the states but acceleration of industrial activity will compensate for such a fall,” said Sen.

He said rationalization of taxes on coal will allow power generators to reduce their tariffs, eventually resulting in lower power purchase cost of discoms. “This will improve the credit rating of discoms and allow them to be bankable.” 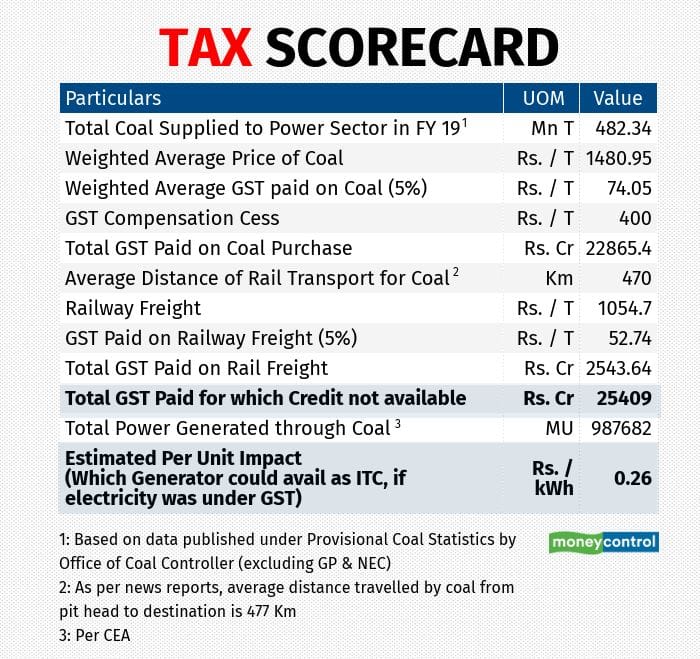 The power producers informed the ministry that the subsidy burden of the government towards discoms is likely to reach almost Rs 100,000 crore on the back of growing revenue gap. Reduction in the taxation on coal will ease the government’s subsidy burden and reduction in losses of state discoms will also allow them to decrease their dues and, in turn, ease their pressure on the banking sector, the ministry was told.

Thermal power generation is likely to power around 50 percent of India’s electricity requirements for at least another decade or so and thus its importance and the need for it to be competitive cannot be downplayed. With increasing renewable penetration, the thermal sector is operating in a competitive downstream market for power, with monopolistic upstream suppliers (CIL) and service providers (Indian Railways) who are imposing extractive taxes on the sector.

In India, the world’s sixth largest economy with the world’s second largest population, consumption of energy has more than doubled in the last two decades. Today, India is the world’s third largest energy consuming country after China and the United States. And the power sector accounts for 40 per cent of India’s total primary energy demand. Coal accounted for almost half of India’s source of consumption of energy sources in 2019, followed by crude oil.  India’s installed capacity two decades earlier was 63 GW which now stands at over 370 GW, second only to China & the US.