MC Interview | 'Our window into next 50 years': Dubai's Museum of the Future planners share vision behind the marvel

Architect Shaun Killa and Dubai Future Foundation CEO Khalfan Behloul share what makes the museum unique, stimulating and futuristic, as well as the vision behind its creation and the challenges in its execution.

General view of the Museum of the Future in Dubai, UAE (Image: Reuters)

Dubai's 'Museum of the Future', an architectural marvel with a first-of-its-kind of concept and design, was unveiled on February 22. Promoted as "the most beautiful building on earth", the museum is 77-metre tall and spreads across 33,000 square metres.

Unlike traditional museums that dive into the past, this promises to take the visitors on a journey to "2071" -- the year that will mark the centenary of the founding of the United Arab Emirates.

In an email conversation with Moneycontrol, architect Shaun Killa of Killa Design and Dubai Future Foundation (DFF) chief executive officer Khalfan Behloul share what makes the museum unique, stimulating, and futuristic, as well as the vision behind its creation and the challenges in its execution.

The first part of the interview is with Shaun Killa, who served as the chief architect of the Museum of the Future. Here are edited excerpts from the conversation: Shaun Killa was the chief architect of the Museum of the Future (Image: Killa Designs)

Was the Museum of the Future your most stimulating project? What were the major challenges that you faced during its execution?

The Museum of the Future has been one of the most stimulating projects I’ve designed. It is a highly public cultural building, hyper unique in its form and technically complex in its execution.

The major challenges in the design of the Museum of the Future were the incorporation of the calligraphy windows into the parametrically optimised torus form inclusive of the avoidance of the structural nodes through the calligraphy all of which took a year.

The challenges in the execution were the coordination of more than 1,000 unique structural nodes and their base connections, clash avoidance with secondary support steelwork, together with highly complex fit-out and MEP (mechanical, electrical & plumbing).

The challenges in the execution were the coordination of more than 1,000 unique structural nodes and their base connections
A greater challenge was the construction of the unique 1,024 GRP (glass-reinforced plastic) and stainless-steel façade panels, which used aviation software construction technology, CNC robotic technology, and cutting-edge molding and processing systems required a 16-step process to produce. Multi-layered laser positioning systems were used to accurately position both the steel diagrid and façade panels. 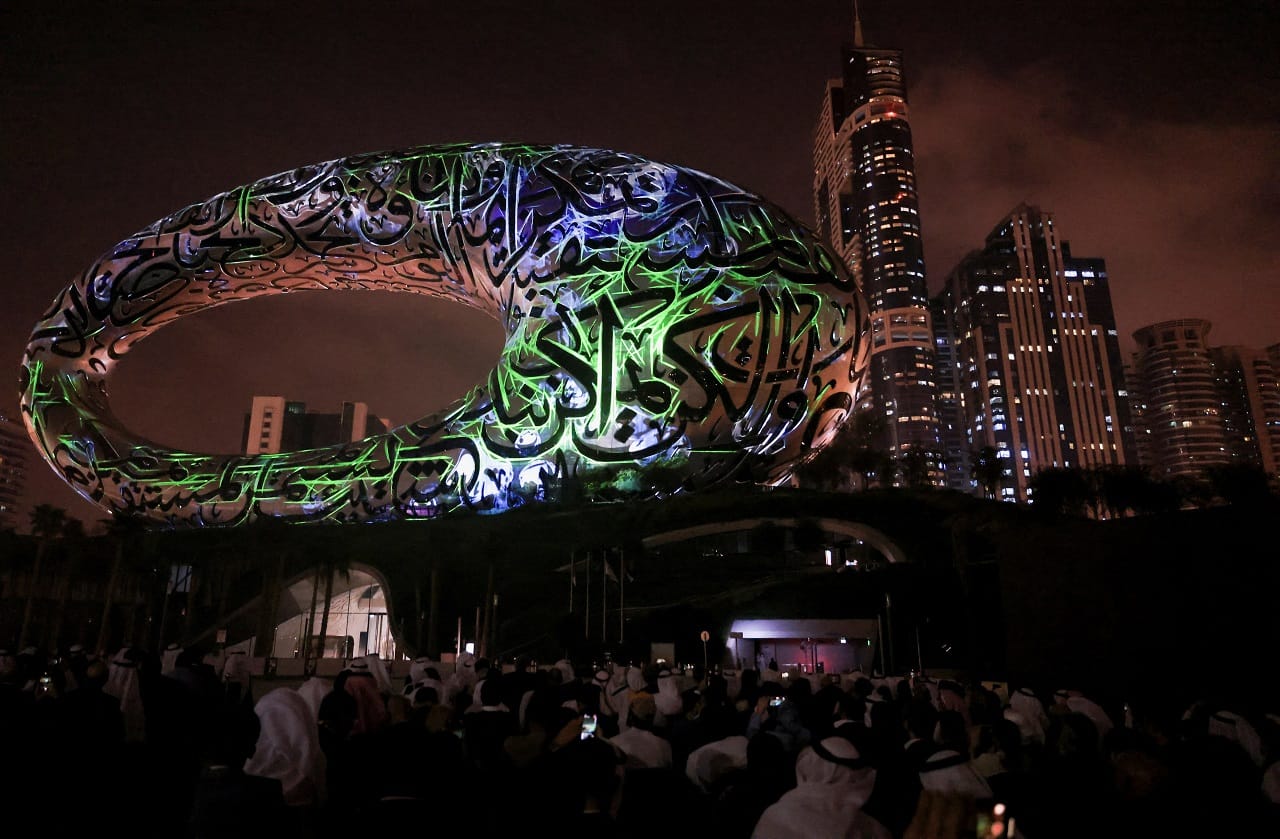 People attend the opening ceremony of the Museum of the Future in Dubai on Feb 22, 2022 (Image: Reuters)

The museum is described as the "most beautiful building in the world". According to you, what makes it so unique - the cutting-edge construction tech or the far-sighted concept that connects the present with the future?

Firstly, the far-sighted concept with its unique torus form which incorporates the ancient art of calligraphy as fenestration as well as the spatial and volumetric spaces within the building make this building highly distinctive as a global icon. The complexity and the cutting-edge technology also push the limits of the construction industry.

After Burj Khalifa, Dubai is now home to another architectural marvel- the Museum of the Future. As an architect, how do you view the city?

Dubai is home to many global icons including the Burj Al Arab for tourism, Burj Khalifa for retail, commerce, and living and now the Museum of the Future as a symbol of its future focus and visionary leadership as well as creating a hub for connecting the world through innovation and technology. The museum is also a symbol of the multiple programmes of the Dubai Future Foundation to constantly improve and protect the world and its future generations. Members of the museum staff stand in an exhibit. (Image: Reuters)

The second part of this interview is with DFF CEO Khalfan Behloul, under whose watch the project was executed. The museum is considered to be his brainchild. Apart from explaining the vision behind the museum, 'His Excellency' - as Behloul is formally referred to - spoke about the UAE's plans for a sustainable future, the pace of modernisation, and post-COVID economic recovery. Here are edited excerpts from the conversation: The museum is themed around the rapidly evolving concepts of science, artificial intelligence, mobility, and climate adaptation. But beyond symbolism, where do you see the UAE in terms of progress in these sectors? What are the targets for the near future?

In just 50 years, the UAE has imagined, developed, and executed the sort of exponential transformation and innovation in energy, communications, health, medicine, governance, ecology, education, culture, and business that would normally take centuries to complete.

The museum is designed to foster a spirit of collaborative innovation among global visionaries. Bringing together great minds, in an open laboratory for ideas and innovations, in order to tackle future challenges facing humanity.

In science, for example, the UAE’s Hope Probe in 2021 and the Emirates Lunar Mission in 2024 demonstrate advances in space science and technology. Meanwhile, on earth, the use of 3D-printing technology in the construction of buildings and laboratories has also emerged. 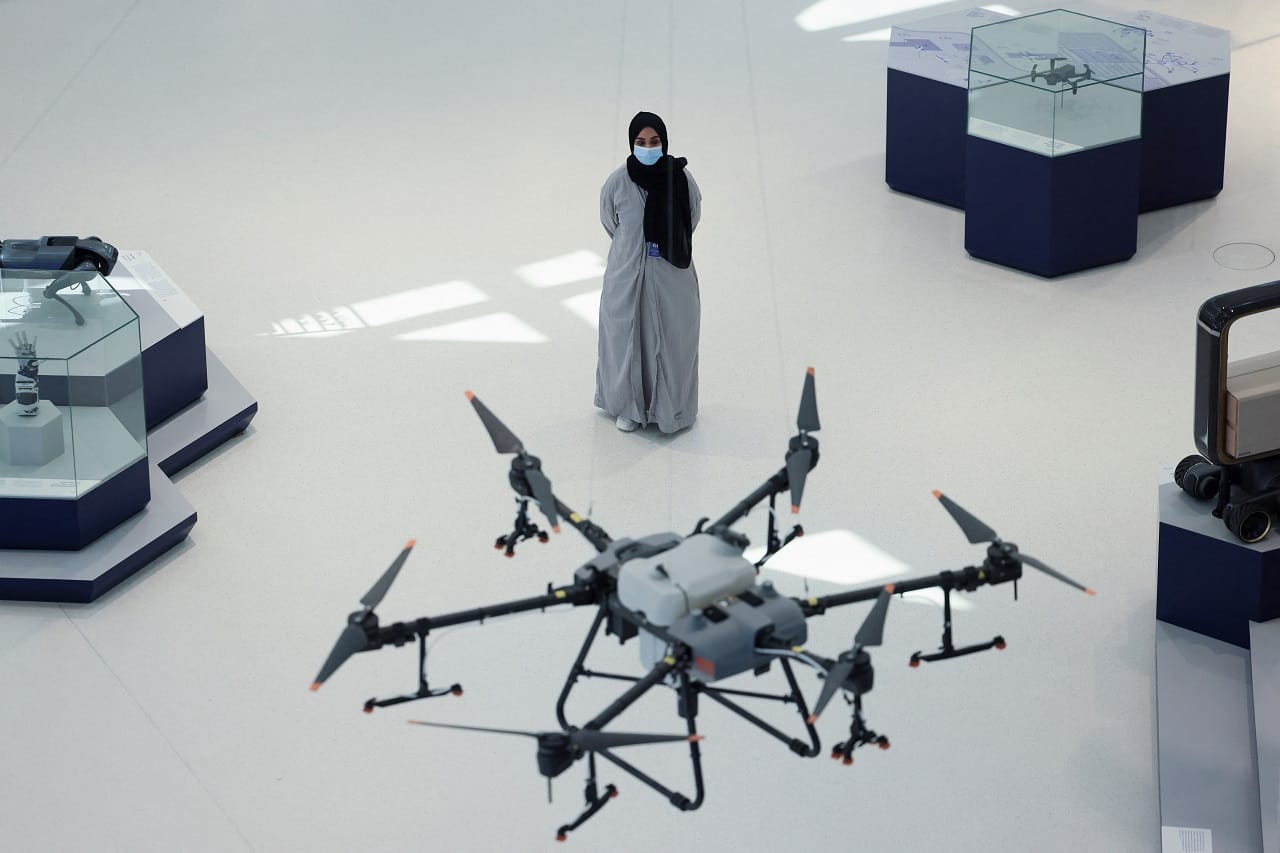 A member of the museum staff stands near an unmanned aerial vehicle (UAV) (Image: Reuters)

The DFF’s recent research focuses on ‘The Global 50’ or the 50 transformational technologies for a sustainable future. Can you explain its relevance for the UAE and how it fits into the geopolitical framework of the Middle East?

The next 50 years will witness more changes in technological, scientific, economic, and social advancements. Changes that will have an impact on every country, every society, and every person on this planet, from the way we work and live to the way we think.

We must not only prepare for these changes but create them. ‘The Future Opportunities Report: The Global 50’ covers the breadth of human experience and our relationship with the environment, spanning energy, communications, health, medicine, governance, ecology, education, culture, and business.

It was launched in part to help decision-makers develop strategies and plans and to contribute to the launching of global dialogue to identify positive transformations to serve humanity and build a better future. More than a museum, experts say the Museum of the Future is an incubator of new-age technology (Image: Reuters)

As we speak of the future, it is key to note that the recent past witnessed the COVID-19 jolt. Would you agree that the pandemic has hit the pace of modernisation in the UAE and adjoining the Arab world? How rapid could be the overall recovery?

The global pandemic has impacted every nation in the world, with disruptions to supply chains and key sectors such as aviation, hospitality, and tourism. The UAE did not escape it, of course, but our swift, coordinated response ensured we were able to emerge from the lockdowns and business closures more rapidly than most countries.  Currently, the UAE is number one in Bloomberg’s global Covid Resilience rankings.

Even our response was rooted in innovation. We unearthed solutions that would not have been available had we not invested in our research, development, and scientific communities over the past few decades. Our researchers, for instance, created vaccines from recently developed classes of medicine, with testing facilitated by AI.

Closer to home, we all became a lot more familiar with video-conferencing technologies to continue to work and engage with families and friends. Companies and governments worked to restructure supply chains to maintain the flow of essential products.

This particular experience has shown that unplanned-for-events can unleash human ingenuity and innovation. From the rise of mobile applications to the implementation of innovative technology, automation, and telehealth, the UAE has shown that it is possible to accelerate modernisation even during a crisis.