The Harry Potter series begins with Harry's 11th birthday - and a mushed-up, but baked-with-love cake from Hagrid. The most famous wizard in the world turns 42 today.

On July 31, Harry Potter turns 42 and his creator J.K. Rowling will celebrate her 57th birthday. Every Potterhead knows that it was on his 11th birthday that Harry learnt that he is a wizard, and got admission into the Hogwarts School of Witchcraft and Wizardry. On his 13th birthday, Harry’s Godfather Sirius Black gifted him a Firebolt flying broomstick.

The Boy Who Lived is, of course, known all over the world, now. Here's a look at Potter references in faraway Virginia and Philadelphia, US:

One of the oldest pharmacies in the US, the Museum dates back to 1792 and is said to be the inspiration for the historic Muggle medicines that inspired the herbology and potions of Harry’s wizarding world.

You know of Mr Mulpepper’s Apothecary and Slug & Jiggers Apothecary, and in the Museum you can find dragon’s blood, mandrake root, lavender, castor oil and valerian, and learn about their real-life medicinal uses and origins. You’ll even get the chance to hold a piece of dragon’s blood! Like Harry and Hermione, you can time travel. Head upstairs where all the Harry Potter ingredients are housed. On your way, be sure to look down to see the trapdoor that was used throughout 1800s as a freight elevator. Don’t worry, Fluffy’s nowhere to be found.

For those desiring an even more magical experience, visitors can mix their own bottle of potion to take home using a mortar and pestle.

The exhibits reveal the sorcery behind the moments, costumes, characters and environments from the blockbuster films of the Harry Potter series. In the immersive exhibition, the paintings move, the candles float, the mandrakes scream and the dementors — well, they’re creepy!

From the mysteries of the Hogwarts castle to the antics of its students; from daring duels to dragons and the Dark Arts; from glittering Gringotts to the magnificent Ministry of Magic—the exhibition brings magic to life, and reveals the artistry and craftsmanship behind the blockbuster films.

It also features a number of fully fleshed out set pieces from the films, including Hagrid’s hut, Professor Umbridge’s sickly sweet office, and Harry’s cramped bedroom in the cupboard under the stairs. Sit on the uncomfortable bed, and snap a quick selfie before Dudley comes bounding down the staircase. Spend a few minutes in the room to relive scenes like Harry’s first Quidditch game, his wayward flight in a flying car and his first steps inside Hogwarts — all on a massive screen. • Hogwarts house smoothies at Kamal’s Middle Eastern Specialties: In the Harry Potter spirit, they have four different smoothie flavours, each based on a Hogwarts house.

• Wizard-themed Iberico cone at A Taste of Spain. The Cauldron (Philadelphia): You can create a wizard’s potion dressed in a robe and working with a functional magic wand that has sensors to keep the bar tab. The one-hour-and-45-minute ‘potion making’ cocktail experience starts with a class called Spellcasting 101, during which customers pour a welcome cocktail or a nonalcoholic drink from the mouth of a glittering unicorn. Customers then move to a workstation, equipped with a cast-iron cauldron and instructions for making two drinks. The Cauldron claims that it is not affiliated or endorsed by the official Harry Potter enterprise, but it's still popular with wizarding geeks seeking to create their own concoctions.

The Cauldron is also open in New York. 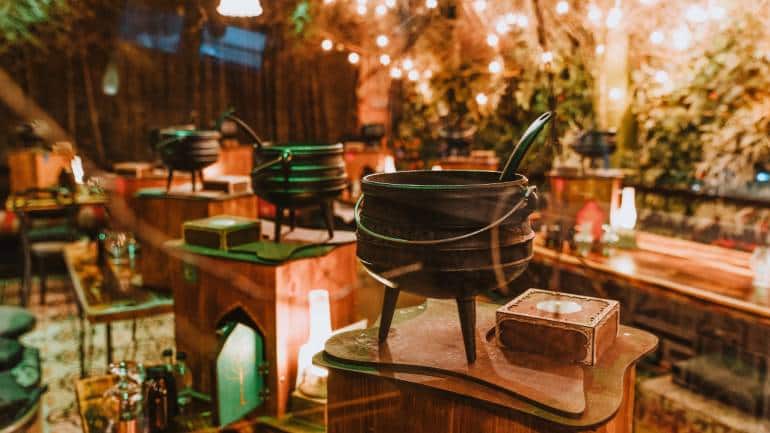