Ord urges readers to take the ideas of the hundred billion people who came before us to fight or ward off the biggest threats to humanity, including climate change and future pandemics.

Toby Ord’s book The Precipice: Existential Risk and the Future of Humanity (2020) is a moral philosopher’s appeal to humanity to protect itself from itself. Through a careful assessment of the existential risks posed by nuclear weapons, biotechnology and artificial intelligence, the author outlines how human beings can choose to act instead of feeling out of control.

Ord is a senior research fellow at the Future of Humanity Institute at Oxford University, and also an adviser to the World Bank. He wants us to take responsibility for the “stunning inheritance” that we are the beneficiaries of. This includes “innovations in technology, mathematics, language, institutions, culture, art; the ideas of the hundred billion people who came before us, and shaped almost every facet of the modern world.”

Read more: COP26 | Who will finance loss and damage? 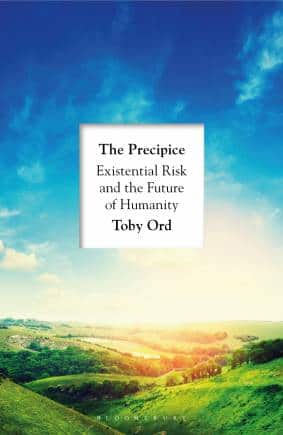 Published by Bloomsbury, the volume runs into 480 pages. Take a deep breath before you embark on this adventure because the author will take you through “the 2,000-century track record of human existence” before he addresses “the Precipice”. This period, which is ongoing, began with the detonation of the first atomic bomb in Hiroshima, Japan, in 1945.

Ord writes, “Existential risk was a highly influential idea of the twentieth century. But because there was one dominant risk, it all happened under the banner of nuclear war… And with the end of the Cold War, this risk diminished and the conversation faded.” Ord wants to renew this conversation because humanity is now vulnerable to the existential risks of nuclear war, engineered pandemics, totalitarianism, climate change, and unaligned artificial intelligence.

If you are used to seeing life as a film reel with yourself as the central protagonist and everyone else in minor and insignificant roles, this book will serve as a wake-up call. It will help you think about the vastness of the universe and contemplate your place in it. The author’s insistence on the big picture is not meant to make you feel small. His objective is to push you to appreciate interconnectedness as a source of safety, hope and cooperation.

Why should you and I care about existential risks when it seems impossible to take on such hefty matters? Ord writes, “Economic theory tells us that existential risk will be undervalued by markets, nations, and even entire generations. While markets do a great job of supplying many kinds of goods and services, there are some kinds that they systematically undersupply.” He is referring to public goods, which are usually the domain of governments.

The example he uses has to do with air quality, and this would likely strike a chord with all Indian readers. An improvement in air quality does not benefit one specific individual or family. It is a gain for “everyone in the community.” If I benefit from cleaner air, that does not diminish the benefits you can get from it. Protection from existential risk is not a national public good; it is a global and intergenerational public good. What does this mean?

Ord lives in the United Kingdom. He writes, “Its population of nearly 70 million ranks it as one of the more populous countries in the world, but it contains less than one percent of all the people alive today. If it acts alone on an existential risk, it bears the full cost of the policy, yet only reaps a hundredth of the benefit.” Given the belief that some nation states would want to “free-ride on the efforts of others”, governments are reluctant to take swift action.

This book argues that a restructuring of the world order is essential if people of different races, genders and ages, and in diverse regions, have to work together. This makes sense because the Covid-19 pandemic has shown us yet again how economic disparities, and the continuing legacies of colonialism, tend to prioritize some lives over others. While some countries are opening up for economic activity, others have just begun vaccination.

Ord writes, “Recognising that people matter equally, regardless of their geographic location, is a crucial form of moral progress, and one that we could do much more to integrate into our policies and our philanthropy.” This might seem like he is asking us to fight against the instinct for self-preservation but he is actually inviting us to cultivate “a more expansive compassion” since our well-being is dependent on others whom we share the universe with.

The book draws on the research of philosophers, biologists, physicists, computer scientists, historians, anthropologists, statisticians, political scientists and other experts but it speaks in a language that is accessible to non-specialists. The first 250 pages are for the general reader, and the remainder of the book is made up of notes, appendices and resources.

Read this book to glimpse a way out of the fear and helplessness that are often associated with existential risks. We give away our power when we believe that change can come only from politicians who dare to look beyond the election cycle, researchers who maintain high ethical standards, and diplomats who put humanity before their country’s interests.

We can make a difference through how we consume, travel, parent, earn our livelihoods, and use our wealth. We are capable of thinking about what future generations need us to do now so that they do not have to bear the cost of our recklessness. We have the intellect and the means to stall the destruction that emanates from a perversion of our own potential.