COP26 | Who will finance loss and damage?

The contentious issue of funding loss and damage is no longer on the official negotiating agenda for COP 26, but that has not deterred the group of 45 nations, including civil society, from renewing their call for funding for loss and damage at the summit

September’s Cyclone Gulab, the most recent and extreme weather event to devastate parts of Maharashtra, led to the loss of standing crop including soybean, maize, pulses, fruit, vegetables, and cotton across an estimated 1.2 million hectares, while the damage caused by heavy rains and floods since June 1 covered more than 2.5 million hectares in the state.

Over 20 people lost their lives, thousands of livestock perished, and the damage to property is yet to be fully assessed. On October 13, the state government announced a compensation package of ₹10,000 crore for the farmers.

In May, Cyclone Yaas ravaged India’s eastern coast, destroying thousands of homes, inundating dozens of villages and rendering 150,000 people homeless. This was within a few days of the landfall of another cyclone, Tauktae — the most powerful to batter the west coast in two decades, which killed more than 80 oil workers on a barge, and left a trail of destruction in its path. In 2020, it was Amphan that pounded the east coast, affecting 13 million people, and causing over $13 billion in damage.

According to risk analysis company Verisk Maplecroft, India is ranked among the top countries most at risk from natural hazards such as floods and heat waves resulting in losses of a massive $9.8 billion a year. Floods and landslides in India affected about 11.4 million hectares of farmland between 2018 and 2020, the government told Parliament last year.

According to Harjeet Singh, a senior advisor at Climate Action Network International, the recent Intergovernmental Panel on Climate Change report has “warned that unless there are immediate, rapid and large-scale reductions in greenhouse gas emissions, limiting warming to 1.5°C will be beyond reach.

“However, the reality is that vulnerable people and countries are already facing devastating impacts even at 1.1 degree Celsius of warming compared to pre-industrial era, and there is no mechanism under the UN to compensate them for the loss and damage,” Singh said.

Loss and damage has been defined as the effects of Climate Change that are not avoided by mitigation, adaptation, and other measures such as disaster risk management. Loss and damage includes permanent, and irreversible losses such as to lives, livelihoods, homes and territory, for which an economic value can be calculated, and also to non-economic impacts such as the loss of culture, identity, ecosystem services and biodiversity.

Almost all countries, including high-income economies, are incurring loss and damage, but it is the developing nations that remain the most vulnerable to the effects of Climate Change. The worst hit have the least responsibility for the climate crisis, and the lowest capacity to bear the costs of past, current and foreseeable losses. Climate-induced disasters are expected to cause loss and damage of about $400 billion a year for developing countries by 2030; by 2050, two studies found annual damage in the developing world would average somewhere between $1.1 trillion and $1.8 trillion.

Loss And Damage In Climate Negotiations

There is no provision in the United Nations Framework Convention on Climate (UNFCCC) for loss and damage already incurred due to human-induced Climate Change. No one expected the negotiations to go on for over 20 years. Even if they knew that climate impacts were going to worsen, no one was willing to anticipate the severity, and frequency of extreme weather events, and their impact on the world economy. But most of all, the historic climate offenders — the developed countries, especially the United States — abhor the idea of paying any compensation for the devastation playing out in the developing world.

It is not surprising then that loss and damage has remained a thorny issue at the UNFCCC negotiations. It was initially raised by the Alliance of Small Island States as a proposal to be included in the UNFCCC, but it was not until 2007, at COP 13, that loss and damage featured in the decision text, known as the Bali Action Plan, for the first time.

In 2010, the Cancun Conference of the Parties (COP) of the UNFCCC established a work programme on loss and damage. In what is considered a breakthrough, in 2013 the Warsaw International Mechanism (WIM) for loss and damage associated with Climate Change impacts was established consisting of a 20-member executive committee, with equal representation of developed and developing countries.

Since 2018, the committee has been working on a five-year rolling work plan, which covers slow onset events; non-economic losses; comprehensive risk management approaches; migration, displacement and planned relocation, and action and support. 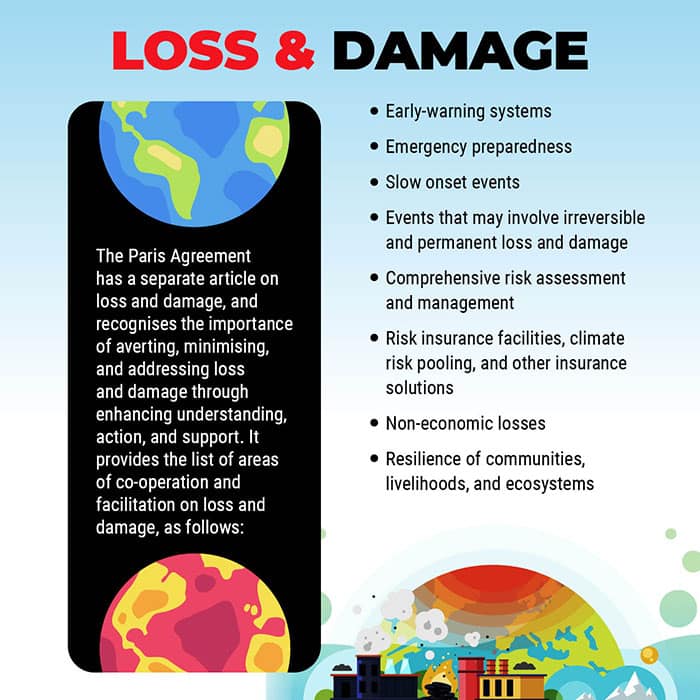 At the end of COP 25 in Madrid, the first demand was achieved with the agreement to set up a new Santiago Network on Loss and Damage (SNLD), but the second demand for funding was not agreed upon, mainly due to US’ behind-the-scenes efforts. Following hectic and acerbic negotiations, the COP agreed to consider loss and damage financing under the financial mechanisms of the convention, including the Green Climate Fund, without any obligation on part of the developed countries to provide new and additional finance.

Effectively, the contentious issue of funding loss and damage is no longer on the official negotiating agenda for COP 26, as it was in COP 25, but that has not deterred the 45 nations under the aegis of the Climate Vulnerable Forum or the Least Developed Countries and Small Island Developing States, including civil society, from renewing their call for funding for loss and damage at COP 26.

The fact is that developed nations have not delivered on commitments of $100 billion per year by 2020 in support of climate action in developing countries. On September 17, the Organisation for Economic Cooperation and Development said climate finance provided and mobilised by developed countries amounted to only $79.6 billion in 2019. While appropriately verified data for 2020 will not be available until early next year, it is clear that climate finance will remain well short of its target.

Achieving and sustaining funding of $100 billion a year until 2025 is just one of the issues on Alok Sharma’s list  central to the success of the conference. Sharma, a British politician, is the president of COP 26. Another is the delivery of climate finance beyond 2025.

Saleemul Huq, director of the International Centre for Climate Change and Development and chair of the expert advisory group of the Climate Vulnerable Forum, proposes a way to break the impasse. “At COP 26, loss and damage will need to be discussed and tackled at a political, rather than negotiating, level. We need to find a possible way forward that might not require all 196 countries to agree, but rather start with a coalition of the willing. This would involve those who are willing to support ways to deal with loss and damage, which are now clearly attributable to human-induced Climate Change, in the poorest countries, perhaps as a solidarity fund rather than as compensation, which still remains a taboo concept for many developed countries,” said Huq.