Meet Amrit Pal Singh, whose digital art is a hot seller worth lakhs

Every piece of digital art can now be uniquely identified with a Non Fungible Token (NFT), making the art itself valuable and its originality unquestionable.

Amrit Pal Singh, 31, sold two pieces of art last week for about Rs 18 lakh or $24,800. His artwork wasn’t sold at an upscale art gallery or at an exhibition flocked by aesthetes. His art wasn’t made on paper or canvas. Neither was he paid in traditional currencies.

Singh sold his digital art on foundation, an app where artists can auction their creations and got paid in Ether, a cryptocurrency that’s currently valued at about $1,500 apiece. You’re probably thinking: who in their right mind would pay for digital art? And that too to an unknown artist from India?

“This is very different from anything anyone has ever seen,” said Singh, who created art inspired by Daft Punk, the Parisian electronic music duo who recently split. Anonymous collectors swept up Singh’s ‘toy face’ rendition of the musicians for 15 ETH or about $24,800 on 25 February 2021. Singh has been a 3D illustrator and has dabbled in many design projects before. But this has been his most successful endeavour yet. 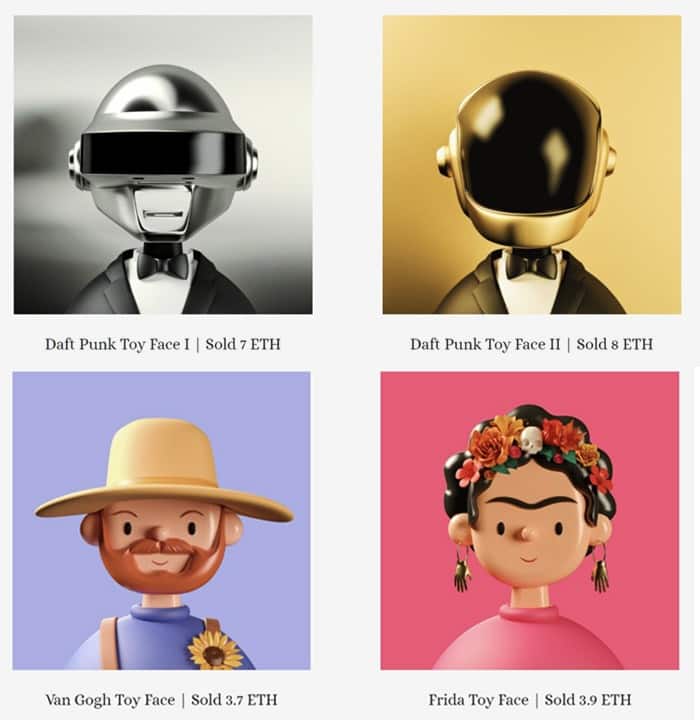 Selling digital art, and other forms of media have become possible with what is called a Non-Fungible Token (NFT). Every piece of digital art can now be uniquely identified with an NFT, making the art itself valuable and its originality unquestionable.

A non-fungible what? A nonfungible token is an entry on a blockchain.  Err...blockchain?

Simply put, a blockchain is a digital, distributed, ledger. Entries on the ledger are validated by all participants that use the blockchain and use the same set of rules.

A nonfungible token is a unique entry in the ledger and is tied to a digital asset. A buyer, who buys a digital asset, is assured of its authenticity even when it changes hands. And a seller can now be sure that people aren’t buying copies but the real deal.

“In this world (NFT art), the collectors are mostly tech people and digital art really resonates with them and that’s why you’re seeing this boom which wouldn’t have been possible in the traditional art world,” he says. Tech executives such as Elon Musk and Chamath Palihapitiya are collectors of such art.

The world of NFT art is seeing a big boom indeed. Devin Finzer, CEO of NFT marketplace OpenSea, told CoinDesk that it saw art sales go from $1 million in August, to $8 million in January and to $50 million in February! Several other market places are also selling NFT art. This includes the likes of Zora, SuperRare, and Foundation where Singh sold his art. Other platforms include NiftyGateway, Rarible, Makersplace, and KnownOrigin.

To be sure, the traditional auction houses have also caught up to digital art.  Auction house Christie’s is currently selling artwork by Mike Winkelmann aka Beeple — a digital artist with over 1.8 million Instagram followers. His work titled, Everydays: The First 5000 Day s(2021), is a collection of 5000 images created since May 1, 2007.  Christie’s sold NFT art by Robert Alice.

The future, for digital artists like Singh, is bright. “Some people think it’s a bubble. But it’s backed with solid tech. It might get saturated in time but a lot of collectors will come in and everyone will find their audience. To me and others in the community it looks like it is here to stay,”  says Singh.

Jayadevan PK is a storyteller who focuses on business and technology. His first book, Xiaomi: How a Startup Disrupted the Market and Created a Cult Following, was published by Harper Collins in April 2021.
Tags: #digital art #hello world
first published: Mar 3, 2021 11:07 am