Founder of an offbeat and expeditionary travel community, Nidhi Salgame exemplifies the idea of courage, fearlessness and the spirit of adventure.

At age seven, Nidhi Salgame undertook a difficult outdoor journey encouraged by her parents who wanted to make their daughter independent. Little did they know she would get hooked and make a life and career out of it.

The founder and director of the off-beat and expeditionary travel community Wander Beyond Boundaries (WBB), Nidhi began trekking and mountaineering when still a little girl. At the age of 11, she went on her first Himalayan expedition. By 13, she became an adventure trip leader in the Western Ghats.

At 17, hoping to study ‘outdoor education’, which was not offered by most colleges in India, she quit her studies to build her experience around real learning. “It was tough to convince my parents, but I guess I sailed through,” recalls the adventurist, who was raised in Bengaluru in a middle-class family.

Her mother is a retired scientist with a Ph.D. in dairy microbiology and her father has been an engineer with Bosch. As Nidhi puts it, her father is the inspiration behind her flawless driving skills and her passion for vehicles.

But apart from that, it has taken conviction and perseverance of her own to map this journey – from carrying her children on her back while hiking into the wilderness to even building her own jeep.

Recalling the old days, the mother of two says, “When my children started growing, I needed a vehicle to take us to remote areas. Back then, I did not have the resources to buy an SUV or invest in any vehicle. So, I bought an old condemned chassis, picked up an accident vehicle’s Bolero engine, worked with a mechanic, and built my own four-wheel-drive. In 2007, for the first time, I drove from Bangalore to Ladakh. That’s how long-distance off-roading with the children started and by 2014, I had done quite a bit of it.”

In 2015, Nidhi helmed one of the first all-women transcontinental expeditions from Delhi to London by road. It was a trip for which she had to start from scratch – from raising the money to getting the visas and burying herself in all kinds of government paperwork.

Another catch was to get the vehicle. When no sponsor came forward to support, Mahindra First Choice Wheels offered her a Scorpio. “They said it had driven 170000 km. Would I still take it? I said, of course! And the journey was totally worth it.”

In 2016, the outdoor educator embarked on yet another solo drive – of around 5000 km from Delhi to the middle of Siberia!

Nidhi has always held strong to her convictions. She also never shied away from talking about the toughest phases of her life, be it walking out of her marriage or raising her children alone. “There have been mistakes, learnings, successes, celebrations but no regrets,” avers the 40-year-old.

In 2018, Nidhi met Colonel Satty Malik, her partner in life and business. He is an Army veteran with several years of off-roading and extreme terrain driving experience. Today, they run WBB with an aim to bring exposure, experience and opportunity for growth to a niche group of people who are inherently motivated to push themselves.

WBB has now evolved into a community of 50 people known for not only introducing the idea of extreme overlanding but also for finding extreme terrain that gives them the opportunity to test their inner mettle. Together, they have driven through frost-covered and extremely unpredictable highways and places where temperatures can drop to as low as –70º Celsius.

Nidhi recalls, “During our Winter Himalayan expedition, I was leading a convoy of 11 vehicles with drivers of diverse backgrounds and participants who were accomplished professionals. It was snowing for about eight hours, and we got stuck. To be driving on an unfamiliar road in the dark with continuous snowfall was hugely unnerving. My leadership was tested to the hilt, and it was one of the most humbling experiences.” 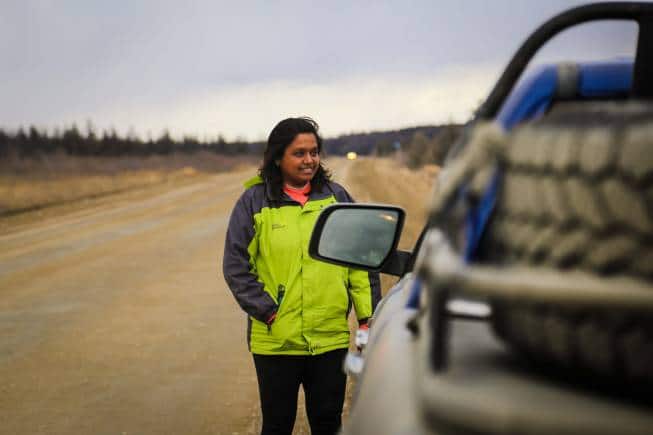 “There have been mistakes, learnings, successes, celebrations but no regrets,” avers Nidhi Salgame

Besides exploring trails, WBB also undertakes Expeditions for Education (E4E), which introduces students to remote corners of the globe. In 2018, Nidhi and Satty drove 3,000 km and partnered with over 10,000 students across eight schools in mainland India and helped them interact over a video call with their counterparts in schools bordering the Line of Control in Kashmir.

The idea was to facilitate direct dialogue between students across borders and expose them to a multiplicity of views and perspectives about a region that has seen long-standing conflict.

For Nidhi, expeditions are a source of self-growth. She says, “After being an overland adventurer for several years now, I learned that one is just a speck in this gigantic universe and that it’s a journey of hope.”

A journey where one tastes the rawness of nature, where one requires more mental training than physical, and where one needs to have a mindset of enduring, surviving, and learning. A journey where one is left with only two options in the face of adversity – crib or get out of it winning! Nidhi has always chosen the latter.