Dancing for the planet: Tribal community members from Bastar to Uzbekistan say culture and climate change are linked

Indian and international performers at the second edition of Chhattisgarh's National Tribal Dance Festival express respect for nature on the eve of the United Nations Climate Conference in Glasgow.

The second edition of the National Tribal Dance Festival in Raipur, Chhattisgarh, which concluded on October 30, 2021, brought together performers from India and abroad.

Dancers in bright green clothes and headgear lined with twigs of sacred trees sent out a powerful message to preserve the planet at second edition of the National Tribal Dance Festival in Raipur, Chhattisgarh, from October 28-30, 2021.

Taking place on the eve of the UN climate summit in Glasgow, the three-day festival saw representatives of tribal communities from India and abroad put up a united front: from Bastar to Birbhum and Uganda to Uzbekistan, tribal communities expressed a desire to return to traditional cultures that place respect for nature at the centre of daily life.

Launched in 2019, the National Tribal Dance Festival is attended by troupes from across the country. Participants from abroad include performers from Sri Lanka, Nigeria, Uganda, Uzbekistan, Palestine, Swaziland and Mali.

The festival, which aims to promote cultural heritage, was cancelled last year due to the coronavirus pandemic.

"There is a direct link between climate change and cultural degradation," explains Ugandan National Cultural Centre's Musiitwa Robert who was accompanying a seven-member dance troupe from the East African nation to the National Tribal Dance Festival. "We are experiencing climate change because of the erosion of our cultures. We must preserve and popularise traditional cultures around the world to protect our planet," he adds.

Nandu Singh Kusharo, a drummer of the karma dance group from Kodawa village in Raipur district of Chhattisgarh, echoes the sentiments of his Ugandan counterpart. "For centuries, our ancestors have worshipped trees maintaining a balance in nature. Our tribal communities continue the tradition today because trees represent our ancestors," adds Kusharo. "Saving the planet is not one person or one community's job. Everybody has to work together." Karma dancers from Chhattisgarh tie green twigs to their head gear to symbolise preservation of the planet.

Performers representing different tribal communities and dance forms from Bastar in Chhattisgarh to Birbhum in West Bengal have rallied behind calls to preserve traditional cultures to protect the planet.

India is one of the world's biggest sources of carbon dioxide emissions, only behind the United States and China. The United Nations Climate Conference (COP26), which begins in Glasgow, Scotland, on October 31 is being seen as humanity's last chance to fight climate change. The COP26 meet is seeking global action to limit temperature rise below 1.5 degrees Celsius this century. Tribal dance groups from countries like Sri Lanka, Swaziland, Mali, Uganda and Nigeria participated in the festival held from October 28-30, 2021.

"Indigenous communities have traditions in tandem with nature. By promoting these traditions, we are showing to the world that we can align our culture with development," says Anbalagan P., secretary (tourism and culture), Chhattisgarh. "We are also telling aloud that tribal culture is alive and well in our state," adds Anbalagan, a former district collector of the tribal-dominated Bastar district. "Dance has its own rhythm and reason to influence others. Preserving local traditions is part of the festival's objective."

One of the major highlights of the festival is the karma dance, Chhattisgarh's most famous tribal dance form. During the performance, karma dancers gather around a tree while swaying and singing to the beats of drums. "It (worshipping trees) is a tradition we follow. Our forefathers did it and now we are continuing it," says Premsay Rajwade, secretary, Rampur Gram Panchayat in Surguja district of Chhattisgarh.

In Bastar district of Chhattisgarh, folk dances like Gaur Sing of the Muria tribe performed at the festival carry on a culture of obeisance to the environment. A new state-backed Bastar Academy of Dance Art and Literature Foundation is helping new generations among the tribal communities preserve their cultural heritage.

Sporting a bright green sari and a green twig in her head gear, Joba Kisku, a tribal dancer from Kaliganj near Santiniketan in West Bengal, says: "We offer prayers to nature as part of our tradition." A member of the Santhal tribal, Kisku has performed in both editions of the National Tribal Dance Festival in Raipur.

"Every Ugandan by culture is tied to a plant, an animal or a bird as a totem," says Ugandan National Cultural Centre's Robert. "If my totem is a tree, I should fight to protect it," he says. He cites the example of his country's Bakisimba dance in which musicians sing praises of the Mutuba tree that provides the bark cloth used for making garments and accessories.

"Trees are essential to our life as they release oxygen into the atmosphere. We have realised during the pandemic how important oxygen is for our existence," says karma dancer Kusharo, referring to the shortage of oxygen that some cities witnessed during the second wave of the coronavirus pandemic early this year. "Development is needed for progress, but it is our job to make it sustainable," he adds.

The Intergovernmental Panel on Climate Change’s new report released in August this year has warned of the impending climate disaster due to human activities-induced global warming. The World Meteorological Organization estimates floods and droughts caused by climate change have killed over two million people globally in the last 50 years. And extreme weather created more refugees than wars and violence in the world last year. 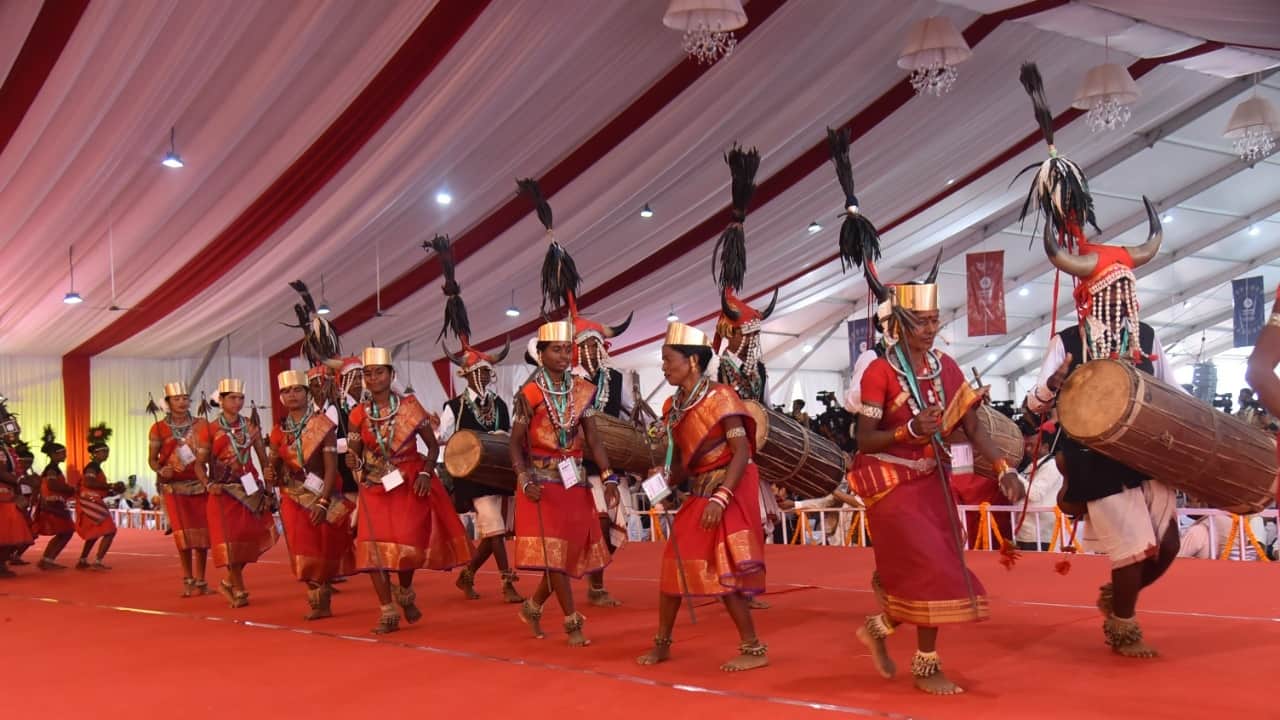 The National Tribal Dance Festival, which aims to promote traditional cultures, had to be cancelled last year because of the Covid-19 pandemic.