Dance scholar Methil Devika on the sensuality and spirituality of Mohiniyattam

In the climactic scene in Methil Devika’s dance documentary Sarpatatwam (2018), she enacts the opening of the chakras and the rising kundalini through the classical Indian dance form Mohiniyattam.

With her body, facial expressions and hands creating poetry in motion, the award-winning artist portrays within a few seconds of film the culmination of spiritual knowledge and practice: the destruction of the individualistic ego and the dissolution of self into the cosmos.

The 30-minute film brings together all of Devika’s passions – philosophy, music, dance and study of the scriptures. Critically acclaimed and even a contender for the Oscars, the film may touch a chord within you, and that won’t be accidental.

“People say my art gives them goosebumps or leaves them elevated. It would not be possible if I had not experienced that state myself; the experience comes first and then the art,” says the Thiruvananthapuram-based dancer, actor and educator, alluding to a divine energy that inhabits the world of artists and creators.

Her performances stand apart not just for Devika’s depth of knowledge about the classical dances but also the experiential insight she brings to them. “I have gone through the dark night of the soul. After an experience, I sink into this abyss – which I call the liminal space between the art being latent and the art materialising. It’s that dark phase when you wait. Creativity is a painful process. Like all artists, I’m very sensitive. But that’s why I create like this. The body has an intelligence even before the mind,” says the 44-year-old dance scholar, who is adjunct professor of dance at York University, Toronto, Canada, and Sree Sankaracharya University of Sanskrit, Kalady, Kerala. 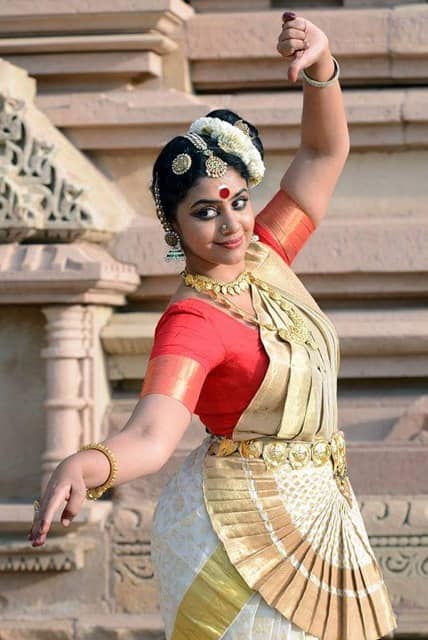 Devika is a well-known face in Kerala’s media not just for her own scholarly accomplishments and brilliant performances, but also for her famous husband: 64-year-old Malayalam film star and politician Mukesh.

Devika is a well-known face in Kerala’s media not just for her own scholarly accomplishments and brilliant performances, but also for her famous husband: 64-year-old Malayalam film star and politician Mukesh.

The power couple have been married since 2013; both have children through previous marriages, a 14-year-old son in Devika’s case, and two from Mukesh’s first marriage to leading south Indian film actor Saritha.

Since 2016, Mukesh has been a member of Kerala Legislative Assembly representing Kollam constituency. If Devika’s life wasn’t full enough before, it is certainly packed to the brim now.

Born and raised in Dubai, Devika was wearing ghungroos even as an infant, and began learning Bharatanatyam at the age of four. By the age of 13, she knew she wanted to pursue the classical arts when she grew up.

I go by my own rules, my own formula about life. I believe there is no right or wrong way to live, and as long as you are operating from love and compassion, it’s all good
- Methil Devika

But, like any other self-respecting Malayali girl who was also good at studies, she made conservative academic choices in college: a Bachelor’s in commerce from Palakkad, and an MBA from University of Madras. But her choice of location was strategic: “I wanted to study Kuchipudi dance in Chennai!”

After graduation, Devika got a job through campus placement at a television channel’s head office in Thiruvananthapuram but, three months down, she knew being a producer was not where her destiny lay. Instead, the city being a hub of arts offered her ample opportunity to be a dancer and performer.

That’s when she set her heart on doing a doctorate in dance. It was unheard of in Kerala so Devika, who is the youngest of three sisters, took her father along to Rabindra Bharati University in Kolkata to find out about the admission process.

“They insisted my MBA was of no use and I’d have to do an MA in dance first,” she narrates. “And so I did. I had gone there with just two pairs of clothes and I ended up staying there for two years.” She followed it up with a PhD in Mohiniyattam from Bharathidasan University, Tamil Nadu.

In 2010, she launched her own dance academy Sripada Natya Kalari in Palakkad, and last year a second one in Thiruvananthapuram. She is the recipient of various awards at the national and state levels, and is empanelled in SPIC MACAY to promote Indian classical music and culture amongst the youth. She has also been on the board of various educational institutions.

Devika’s practice of Mohiniyattam – a sensual and feminine dance form that originated in Kerala – is avant garde in the sense that she constantly pushes its boundaries. “Mohiniyattam has rigid rules – men are not allowed to perform it, for instance, though male teachers existed in the distant past,” she informs.

But through her performances, she brings in a more modern sensibility and universal appeal. It helps that she is also at ease with other forms of dance: Kuchipudi and freestyle. “Mohiniyattam is my soul, it is home to me. But one doesn’t want to stay home all the time!” she jokes.

Instead of forcing herself into puritan values of performance, Devika allows intuition and her own experience to guide her. She choreographed Sarpatatwam in just 30 minutes, even though the music took her days to compose. Her Instagram page often offers her thousands of followers candid glimpses of her breaking out into impromptu dances, skipping joyfully, with the wide smile of a woman in her element. 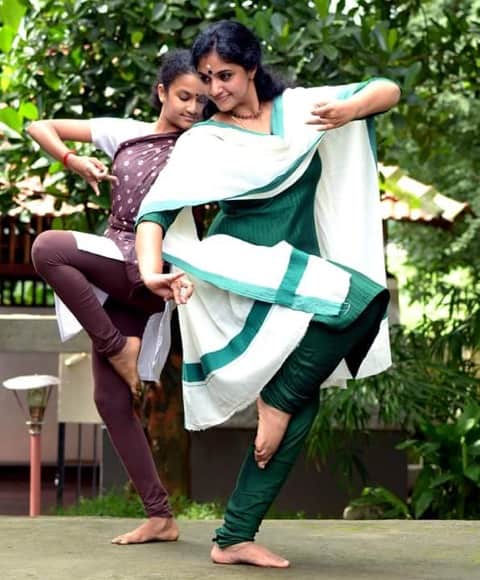 Born and raised in Dubai, Devika was wearing ghungroos even as an infant, and began learning Bharatanatyam at the age of four. By the age of 13, she knew she wanted to pursue the classical arts when she grew up.

“Art is very liberating,” says Devika, who holds her independence and feminism close to her heart. “I go by my own rules, my own formula about life. I believe there is no right or wrong way to live, and as long as you are operating from love and compassion, it’s all good,” she says.

She predicts that, due to developments in technology, the world will see drastic changes in the way people, especially couples, relate to one another in the future. Despite differences, Devika and Mukesh share a unique bond, and though he is “more of a purist” and may not always agree with her views, he is still very understanding. “He has seen a lot of life,” says Devika.

Her advice to women seeking a happy relationship is: “Low investment and high energy. Don’t bother to give your all to someone who does not reciprocate. Invest as much as you get. But when you are together, be in the present and bring in high energy.”

Devika is now working on another documentary film about the divine feminine, and plans to learn sign language to make her art more accessible. The next phase of her journey is summed up in the question-and-answer segment of Sarpatatwam.

Quoting the Upanishads to say “Ignorance is dark and knowledge is darker,” she explains in the film that the journey of spiritual evolution is like a snake shedding its skin.

“The journey needs re-evaluation of one’s weaknesses, regeneration of the self, leaving the past behind; it’s like a rebirth happening every day. What exists finally is bliss and then you are able to radiate selflessness and compassion for other beings. The body is but a mass that exists in a void. It is transient and impermanent. Art is just a medium of experiencing it.”