Explained | How the new vaccination drive is expected to roll out

On April 19, the central government announced a major shift in its Covid-19 vaccination strategy. Moneycontrol takes a look at what these changes mean.

On April 19, the central government announced a major shift in its Covid-19 vaccination strategy. So far it was procuring vaccines from the two major manufacturers, Bharat Biotech (which makes Covaxin) and Serum Institute of India (Covishield), and then passing it onto states. Now, state governments, private hospitals and companies can directly buy from these vaccine-makers at a pre-declared price and begin distribution from May 1. Below is a primer on how the new vaccination drive will work.

How will the new vaccination drive work?

The new plan calls on vaccine makers to supply 50 percent of their monthly doses tested at the Central Drugs Laboratory (CDL) to the centre. They are free to supply the remaining 50 percent doses to state governments and in the open market to private hospitals and companies at a pre-declared price.

Let’s take an example. Say, a company has made 100 doses of a vaccine. Here is how vaccines are distributed under the existing policy: 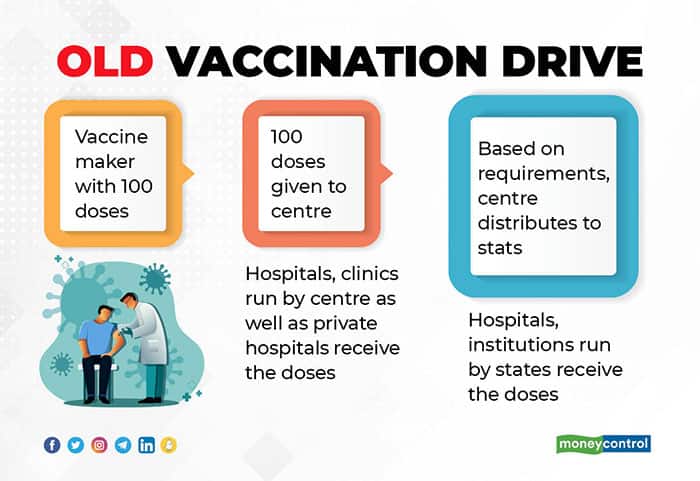 The existing policy for vaccinating all those above the age of 45, and frontline and healthcare workers, is for the most part free, or at most at a price of Rs 250 a dose. The criteria on which the centre distributes to states is still unclear. Moneycontrol reached out last week to the Health Ministry requesting the data on distribution of vaccines to states, but did not receive a response.

Below is how the new policy, effective from May 1, is expected to work: 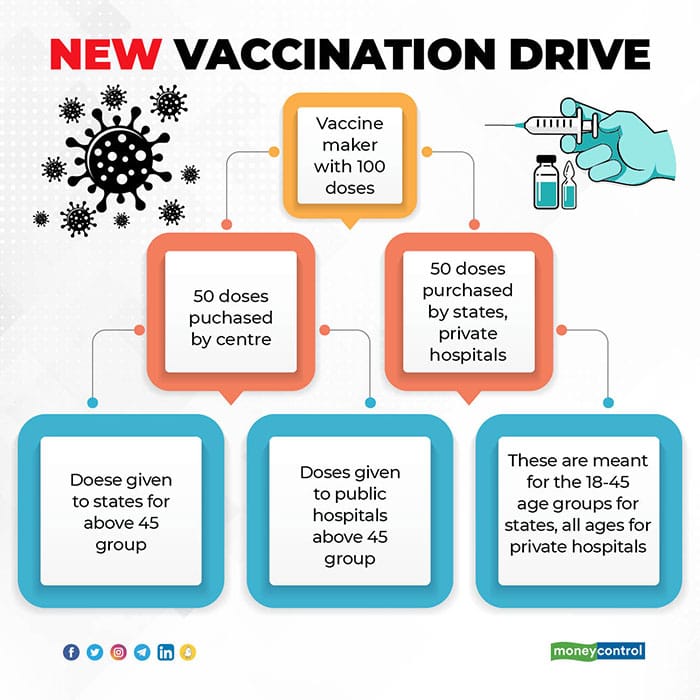 What this essentially means is the centre will focus on vaccinating those above the age of 45 while the vaccinations procured by the states and hospitals directly will be focusing on the 18-45 age group.

“Manufacturers would transparently make an advance declaration of the price for 50 percent supply that would be available to state governments and in open market, before May 1, 2021. Based on this price, state governments, private hospitals, industrial establishments etc would be able to procure vaccine doses from the manufacturers,” the statement on April 19 said.

Even private hospitals? Yes. They would have to procure supplies of Covid-19 vaccine exclusively from the 50 percent supply earmarked for non-central government channels. “The eligibility through this channel would be opened up to all adults, i.e. everyone above the age of 18,” the April 19 statement said.

The government clarified that vaccination shall continue as before in government of India vaccination centres and be provided free of cost to the eligible population as defined earlier i.e. Health Care Workers (HCWs), Front Line Workers (FLWs) and all people above 45 years of age.

We have covered how distribution will work for made in India vaccines? What about the foreign made one? Remember, the government said it will fast track approvals for such vaccines.

The centre said fully imported ready-to-use vaccines will be entirely utilized in the channel meant for states.

So far so good. But things get a little fuzzy from hereon.

What price will private hospitals vaccinate people, given that their entire stock will come from non-central government channels? Private hospitals are for-profit enterprises, and the price at which they will sell doses depends on the rates they buy them at.

There are two elements here: buying from Indian vaccine makers, and buying imported vaccines. The former is clearly expected to be cheaper.

Serum Institute of India said it will sell vaccine in the non-centre channel at Rs 400 a dose. The fully imported vaccines are expected to cost more.

Then there is the question of states. At a time when states are facing the same revenue stress as the centre, and an economic slowdown is expected to continue for some time due to localised lockdowns, purchase of vaccines in bulk will cause a dent to their finances.

Seven states though have said they will provide vaccines to the 18-45 age group for free. These are Kerala, Bihar, Assam, Uttar Pradesh, Chhattisgarh, Madhya Pradesh and Sikkim.

But there are already some rumblings. Just this week, the Chief Ministers of Kerala and West Bengal have written letters to Prime Minister Narendra Modi. Kerala CM Pinarayi Vijayan wrote to PM that the centre should provide vaccines free to the state even for the 18-25 age group.

The chief minister said the state governments are already facing additional financial commitments from the consequences of the pandemic. As the economic downturn is still persisting, the additional burden of purchasing Covid vaccines will place considerable strain on government finances.

West Bengal CM Mamata Banerjee’s letter, on the same lines, was more strongly worded and accused the centre of evading its responsibilities at a time of crisis.

The centre also said from its share, it will allocate vaccines to states/UTs based on the criteria of extent of infection and speed of administration. “Wastage of vaccine will also be considered in this criteria and will affect the criteria negatively. Based on the above criteria, state-wise quota would be decided and communicated to the states adequately in advance,” it said.

Then there is the question of the two major vaccine makers themselves. As per a report in the Times of India, Bharat Biotech and SII’s entire monthly capacity is tied up under the centre’s advance purchasing agreement, and there may not be many doses to distribute through the non-centre channel.