Upcoming Webinar:Watch a panel of experts discuss: Challenges of continuously evolving regulation for Cryptocurrency, on 7th July at 3pm. Register Now
you are here: HomeNewsTrendsExpert Columns

Anatomy of the Vistara safety video: What went into making the viral ad

What worked for the airline’s first in-flight safety video was its differentiated marketing method.

Vistara last week revealed its first in-flight safety video, which has been very well received and is going viral. The safety video is themed on yoga, which has an instructor showcasing various movements in picturesque offbeat locations across the length and breadth of India while giving inflight safety instructions.

While uniquely themed airline safety videos are not uncommon globally (for example, British Airways has had a long-running series featuring famous British comedians, and Qatar Airways has a star-studded football-themed video), and these videos have been proven to be more watched and therefore the safety message better communicated to those who tend to ignore the more staid safety demos and videos, this was a first for India.  The fact that it starts with a visual of the spectacular and much-in-the-news Pangong Lake also led to some buzz.

The method behind the madness

The video however was scripted and shot much earlier — in September last year — and Pangong Lake was chosen as the opening scene simply because it is arguably the most visually spectacular place in India, a place I had personally fallen in love with since I first visited Leh in 2016, scoping it out for Vistara’s operations to it that began shortly thereafter.

The team the conceptualised Vistara’s safety video was also behind the very well-received and popular 'Vistara Retrojet', an Airbus A320 painted in the colours of the original Tata Air Lines of the 1940s that was founded by JRD Tata and eventually became Air India, and featuring on occasion crew dressed in retro-uniforms harking back to the “glory days of flying” of the 1950s and 1960s, on flights featuring menus inspired by Taj Hotels and JRD Tata’s favourite meals as remembered by their chefs.

The attention to detail and authenticity went as far as the registration of the aircraft itself, VT-ATV, a registration that was originally carried by a Tata Air Lines DC3 aircraft. With no colour photos available anywhere of what the Tata Airlines colours were (other than a bare meal fuselage), the team used its creative imagination to come up with a golden-sepia tinted fuselage, with red lettering and grey cheatlines. The special retro flights became highly sought after, and together with the Retrojet, helped make Vistara into the much recognised, differentiated, and respected brand it is today.

Earlier in 2014, (incidentally spearheaded by key members of the same marketing team that later moved to Vistara), SpiceJet had put faces of pilots and cabin crew billboard-style on a Boeing 737, which it named “Red Chilli”. This again was a first in India, and it created a lot of buzz as well as energised the staff internally. This was just a couple of months after SpiceJet surprised and delighted passengers on Holi by having supplementary (non-operating) cabin crew gracefully dance in the aisles to “Balam Pichkari” on several flights. This did initially get the airline in a spot of bother with the regulator because it had never been done in India before, but the matter was settled amicably when it was demonstrated that there was no safety issue, and that such activities were not uncommon on airlines around the world. The Holi dance made headline news for several days, and SpiceJet ticket sales went through the roof during that time, prompting a normally staid finance executive to ask whether we could make the crew dance on every flight. 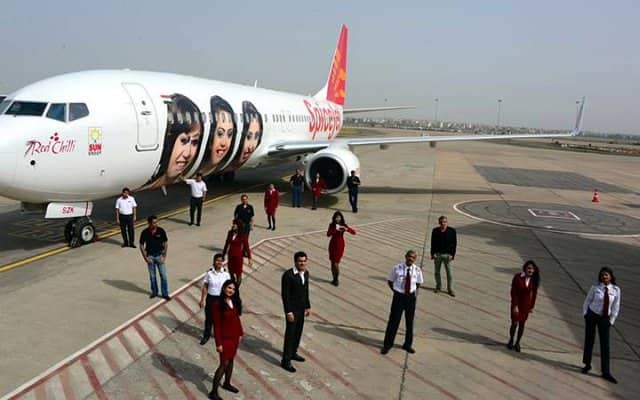 Jokes aside, there is a very clear and driven rationale and focus behind such disruptive and eye-ball catching marketing. It boils down to the need to be able to build a brand that punches above its weight, to help make up for size and scale disadvantage a brand may have vis-a-viz the market leader. Building a differentiated brand with high recall value also generates “pull”, giving customers a reason other than just price to select a product or an airline, and perhaps even pay a slight premium for it. To put it simply, the return-on-investment for such initiatives in terms of goodwill (both internal and external), buzz, and incremental sales generated or price extracted, is much higher than one may achieve from more traditional mass advertising, and helps reduce some of the disadvantage of being a smaller player when it comes to driving customer choice. There is also an element of a smaller player working harder to win and retain one’s business, a concept wonderfully captured in the 1980s marketing by Avis, the rental car company.  It ran a campaign headlined by the words “Avis is only No. 2 in rental cars. So why go with us?”, accompanied by the slogan “We Try Harder” (because we’re #2)! So the next time an ad, marketing campaign, or video catches your eye, remember, there is a method behind the madness. How boring the world would be if everyone followed the exact same script and there was no room for colour, creativity, originality, and differentiation.

Here’s a toast to all the creative minds out there that help make the world a little less predictable and black-and-white. Thank you for the joy and the colour.