Using high-frequency microdata sets of worker output and a dataset of 58,000 factories across India, researchers have concluded in the paper that the manufacturing units produce about 2 percent less revenue for every one-degree rise in annual temperature.

The ministry said the requirement for registering on the portal has been simplified further.

It gets harder for people to work when it gets hotter and this may lead to a reduction in productivity, a new research has revealed.

Using high-frequency microdata sets of worker output and a dataset of 58,000 factories across India, researchers have concluded in the paper ‘The Impact of Temperature on Productivity and Labour Supply: Evidence from Indian Manufacturing’ that the manufacturing units produce about 2 percent less revenue for every one-degree rise in annual temperature.

This is reflected in lower Indian GDP output in hot years and possibly also lower year-on-year growth, the findings say. The researchers have estimated that the greatest declines occurred in labour-intensive plants. 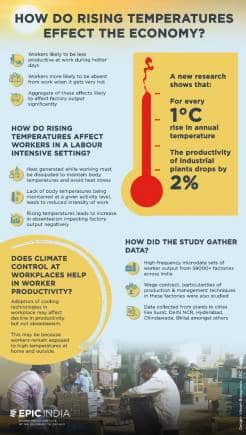 “The effect of high temperatures on lower crop yields has been previously established. This paper shows that rising temperatures can also hurt economic output in other sectors by reducing the productivity of human labour. The damage is greatest when already warm days become hotter,” said Dr Anant Sudarshan, South Asia Director of the Energy Policy Institute at the University of Chicago in a note about the survey.

The findings have been accepted in Journal of Political Economy (JPE), a monthly peer-reviewed academic journal published by the University of Chicago Press established by American economist James Laurence Laughlin in 1892.

“If India wishes to succeed in becoming a manufacturing powerhouse using cheap labour, we need to think hard about how we can adapt to a hotter world.” Dr Sudarshan said.

The authors argue that while focus of the paper is on Indian manufacturing plants, there can be implications for any sector where labour is important such as construction or services since heat stress is a universal physiological mechanism.

Also, read: What the World Bank has to say about low Indian productivity

This multi-year study indicates that climate control in the workplace removes productivity declines but not absenteeism, presumably because workers remain exposed to high temperatures at home and outside.

“We see that in the absence of climate control, worker productivity declines on hot days, and we spot absenteeism even for workers in factories with cooling facilities. When you compound that with limited adoption of climate control technologies in manufacturing industries, you know that we are dealing with a complex problem here,” said E Somanathan

The researchers said that it is entirely possible that the industrial sector might respond to high temperatures by increasing automation and shifting away from labour-intensive sectors in hot parts of the world.

“These adaptive responses may negatively influence wage inequality,” said Somanathan in the note.