The book lists and illustrates concepts like increasing returns and company ecosystem that give digital firms an edge over traditional businesses.

Rethinking Competitive Advantage offers little reassurance to traditional business leaders. To quote: “Some conventional competitive advantages persist, such as brand, reputation, patents, and proprietary technologies. And for capital-intensive businesses like steel and car manufacturing, scale still matters.” But by and large, we are told that in the digital present, few traditional advantages hold good, and provide no certainty of future market leadership or even survival. In the same vein, we are given a fleshed-out list of old-fashioned business concepts and strategies that must now be abandoned.

Along the way, we are introduced to ideas that make digital companies effective, such as the idea of increasing returns. We are told about Amazon, which focuses “not on earnings per share, Wall Street’s favourite metric, but on revenue growth and cash gross margin”.

The book hand-holds the reader through lucid explanations of digital tools such as algorithms, without going into their virtual nuts and bolts. A wise move – most business leaders are not going to code their own algorithms, but will hire coding talent or buy algorithms. They need just about enough information to communicate their needs to domain experts. This book provides that.

We also read about the "ecosystem" as seen in companies such as Amazon, Apple and more. We are told how to create, manage and join an ecosystem. By way of example, we are given an idea of Softbank’s global ecosystem, which is an intricate structure of smaller ecosystems across various industries, and which works towards Softbank’s grand vision, which is also described.

The kernel of the book is a list of traits shared by digital companies:

(3) “They have an ecosystem that accelerates their growth”

And three more traits that I won’t offer spoilers for. Digital companies intuitively developed or designed such innovative modes of functioning; they are collected in this book, and thoroughly elaborated upon.

The authors say that digital operations must not be “tacked on” to existing ways of functioning, must not be “run in parallel” with existing ways; digital operations must be central to the way the business is run. The point is superbly made that in most ways, digital companies have a different DNA than traditional ones, including a fundamentally different company structure. The authors cite the example of Amazon, where “[b]reaking work into bite-sized missions and giving stand-alone teams the autonomy to figure out the ‘how’ leads to faster, better decision-making”. 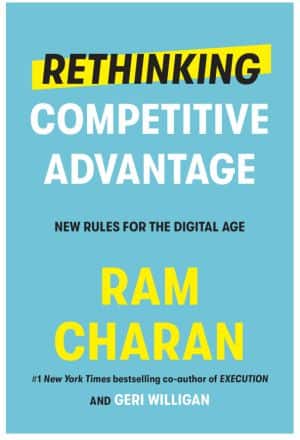 Digital companies, we are told, also emphasize company culture and a “way of getting things done” – the “social engine” of the company. For one, in a company that’s going digital, traditional managers and leaders have to lose their “command and control” mindset and working styles, or ship out.  Leaders at various levels are chosen not only as per “their talent and skills” but also their “values and behaviour” that enable their mostly millennial employees to thrive. The qualities of good managers in digital companies are elaborated in ample detail, as is the mindset of their employees.

We are told that digital companies require rethinking of most ‘traditional’ career aspirations; we are told about the new parameters of career growth in digital companies. By way of illustration, the book provides a superb case study to show how the American company Fidelity PI transitioned from a traditional company to a digital one, and in the process, unleashed the potential of its employees and boosted its revenues spectacularly.

The book is studded with plenty of case studies that enliven unfamiliar concepts and drive them home. All are engrossing and easy to follow. While some of the case studies are from other markets, some are from India, which is a busy theatre of competition between digital companies, particularly the ecommerce companies Amazon, Flipkart, and a subsidiary of Reliance. The book also explains briefly how digital companies responded to the challenging business conditions created by the Covid pandemic.

The book is written in a remarkably simple, efficient, and friendly style. I imagine an entrepreneur or company executive, even a busy one, breezing through the book over a long weekend, and being rejuvenated by its wealth of ideas. If you read this book, it is highly recommended that you keep a pen and notepad handy. Be prepared: this book will provoke you to think.
Suhit Kelkar is a freelance Journalist. He is the author of the poetry chapbook named The Centaur Chronicles.
Tags: #Book Review #Business books #Digital companies #Geri Willigan #Ram Charan #Rethinking Competitive Advantage
first published: May 6, 2021 03:08 pm