Xiaomi’s big product launch event saw the launch of two flagships in the form of the Mi 11 Pro and Mi 11 Ultra along with the mid-range Mi 11 Lite 5G. However, the company also launched the Mi Smart Band 6 and Xiaomi Mi Smart Projector 2 Pro alongside its Mi 11 series.

The Mi Smart Band 6 features a 1.56-inch AMOLED display with a 152 x 486-pixel resolution (326 ppi) and brightness up to 450 nits. The screen is protected by glass and boasts an anti-fingerprint coating.

The Mi Smart Band 6 features SpO2 tracking to monitor your blood oxygen level during exercise. It also has REM sleep tracking and a heart monitor. The smart band arrives with 30 fitness modes, six of which can be auto-detected. There’s also stress monitoring and female health tracking.

Xiaomi’s latest smart band packs a 125 mAh LiPo battery with up to 14 days of battery life and magnetic snap-on charging. The band features water resistance up to 5 ATM, while strap length can be adjusted between 155mm and 219mm. The Mi Smart Band 6 is priced at €45 (Roughly Rs 3,900). 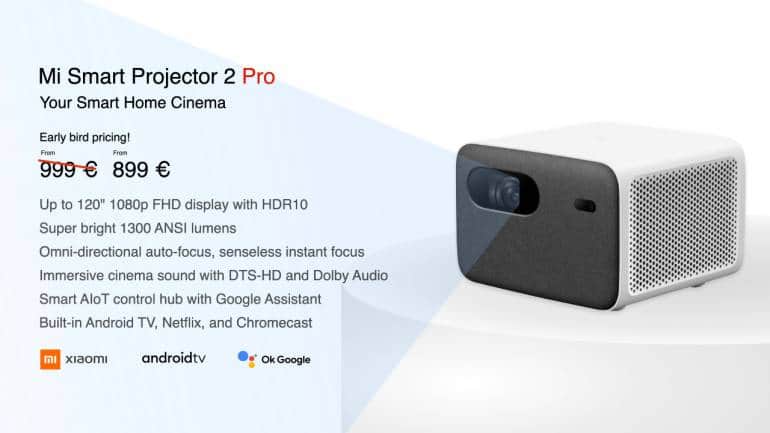 The projector runs Android TV 9.0 with Netflix pre-installed. The Projector 2 Pro uses an Amlogic T972-H chipset (quad A55 at 2.0 GHz, Mali-450 MP5) with 16GB of eMMC storage. It has two USB 2.0 ports, an HDMI 2.0 port, on ARC, and an AV input. You can also use Chromecast to operate the projector wirelessly.

The Mi Smart Projector 2 Pro also has an Ethernet port and supports Wi-Fi 5. It is compatible with the Google Assistant to control other smart home devices. Xiaomi’s smart projector also packs two 10W speakers with Dolby Audio and DTS-HD support as well as a 3.5 mm and a S/PDIF jack for external speakers. The Mi Smart Projector 2 Pro is priced at €999 (Roughly Rs 85,800), although it will be available for €899 (Roughly Rs 77,200) as part of an early bird offer.