Realme has not confirmed the launch date for the Realme GT in India, although the phone was unveiled in China earlier this year in March.

Realme is gearing up to launch its first Snapdragon 888 powered smartphone in India. The Realme GT was recently listed as “coming soon”, suggesting a launch might be imminent.

The listing was spotted on the support page of the upcoming Realme 5G Summit alongside the Realme 8 5G, Narzo 30 Pro 5G, and Realme X7 5G, all of which have already launched in India. The Realme 5G Summit will be held on June 3, while an India-specific event will also be hosted on June 10. 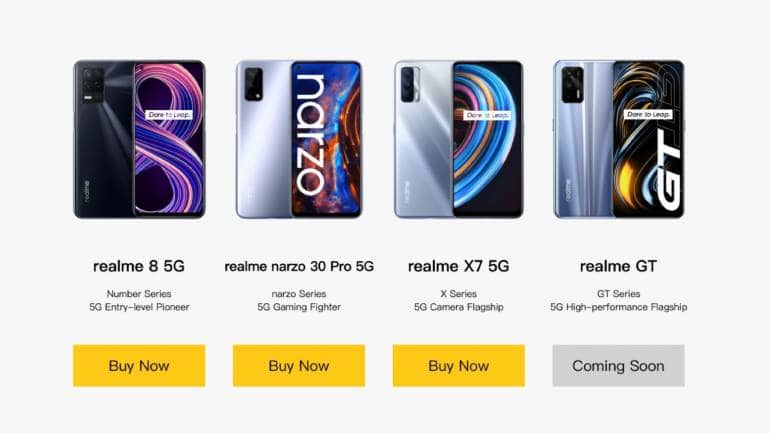 While we don’t expect the Realme GT to arrive on June 3 or June 10, it should arrive in the near future. Realme is launching a new 5G smartphone tomorrow, May 31, in the form of the Realme X7 Max 5G, which is expected to be a rebranded Realme GT Neo.

Since the Realme GT has already been unveiled in China, the specifications of the device are already available. Among the key features of the device are a Snapdragon 888 SoC, a 64 MP triple-camera setup, a 120Hz FHD+ Super AMOLED display, and a 4,500 mAh battery with 65W fast-charging support.
Invite your friends and family to sign up for MC Tech 3, our daily newsletter that breaks down the biggest tech and startup stories of the day
Moneycontrol News
Tags: #Realme #smartphones
first published: May 30, 2021 01:33 pm