Realme GT 2 Pro Review: The flagship killer to beat in 2022

The Realme GT 2 Pro is arguably the best smartphone under Rs 50,000 you can buy in India.

Realme recently dropped its flagship smartphone GT 2 Pro in India. While the company recently revealed the vanilla GT 2, it was the flagship GT 2 Pro that impressed us in our hands-on review.

When it comes to the design of the Realme GT 2 Pro, there’s little to complain about. The Realme GT 2 Pro comes in Paper White, Paper Green, and Steel Black colour options. Additionally, the PaperWhite and Green models are made from a bio-based polymer. The material is ISCC-certified to create 35.5 percent less carbon emission during the manufacturing process. Realme is calling it the Paper Tech Master Design. Apparently, the packaging is also Soy Ink Certified, which is more eco-friendly than traditional ink. The new material used in the Realme GT 2 Pro, makes it feel considerably lighter than a phone with a glass back. I did feel the white looked much better than the green model. The camera bump here is quite similar to that of the Realme 9 Pro+ (Review), while designer Naoto Fukasawa's signature along with the Realme logo is situated on the right of the camera island.

The phone was also quite resistant to fingerprint smudges and is quite comfortable to grip. However, it isn’t all rosy, the new design does have its flaws. We don’t yet know how durable the back is compared to Gorilla Glass Victus seen on most 2022 flagships. Additionally, the frame of the phone is made of plastic, which is quite uncommon among smartphones at this price. While the build of the Realme GT 2 Pro can be called into question, its display cannot. The handset sports a 6.7-inch 2K WQHD+ AMOLED panel that uses LTPO 2.0 technology. The technology enables an adaptive refresh rate of 1Hz to 120Hz to save up to “50 percent energy”. The display has a pixel density of 525 ppi and 100 percent P3 colour gamut coverage as well as 10-bit colour. 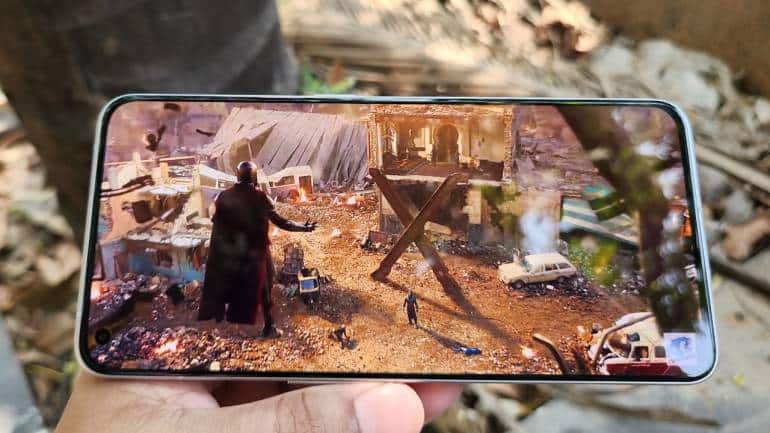 The screen has a DisplayMate A+ certification and HDR10+ support. It also gets pretty bright under direct sunlight, achieving a maximum brightness of 1400 nits. The GT 2 Pro’s display is also protected by Gorilla Glass Victus. There’s no doubt that this display can match that of a premium smartphone, pushing out sharp and vibrant colours. And if the 120Hz refresh isn’t enough, you also get a 1000Hz touch sampling rate, which is excellent for gaming.

Since we’re on the topic of gaming, it is good to see that the Realme GT 2 Pro doesn’t make any concessions on the performance front. The phone is powered by the Snapdragon 8 Gen 1 chipset, making it the second phone to use the chip in India’s sub-50 segment. Several 2022 smartphones like the OnePlus 9RT, Xiaomi 11T Pro, and iQOO 9, all opt for a version of last year’s Snapdragon 888 chip. The GT 2 Pro’s Snapdragon 8 Gen 1 SoC is paired with up to 12GB of LPDDR5 RAM and up to 256GB of UFS 3.1 storage. The phone also has a new and improved cooling system with the “industry’s largest” heat dissipation area. In our limited time with the Realme GT 2 Pro, we saw it run titles like Call of Duty: Mobile and Asphalt 9: Legends with minimal effort. Genshin Impact also ran smoothly on the phone. The phone also managed to surpass the scores of the OnePlus 10 Pro (Review) in Geekbench’s CPU and Compute tests. Performance on the GT 2 Pro was top-notch and the phone didn’t get too hot under pressure.

The phone packs dual stereo speakers with Dolby Atmos support and Hi-Res certification. While the audio coming out of the speakers is quite good, they are slightly quieter than the ones found on the Samsung Galaxy S22 (Review). Additionally, Samsung’s speakers sound a bit clearer at higher volumes. The Realme GT 2 Pro also uses Omni-directional Wi-Fi technology, 360-degree NFC, and uses Ultra-Wide Band HyperSmart Antenna Switching to switch between antennas to give users the best signal strength. The main camera takes sharp and detailed photos in daylight while maintaining good dynamic range. The colours here are a bit punchier and don’t look as natural as those on the OnePlus 10 Pro, but for some punchier colours could be preferable. There’s also a full 50 MP mode to give you more detail in shots, but you cannot enable HDR in this mode.

The new 50 MP ultrawide camera maintains the colour consistency with the main camera and retains a lot of detail in shots. The ultrawide also had impressive dynamic range and a good bit of sharpness. Moving to the super-wide 150-degree field of view and you notice sharpness drops and visible distortion on the edges. 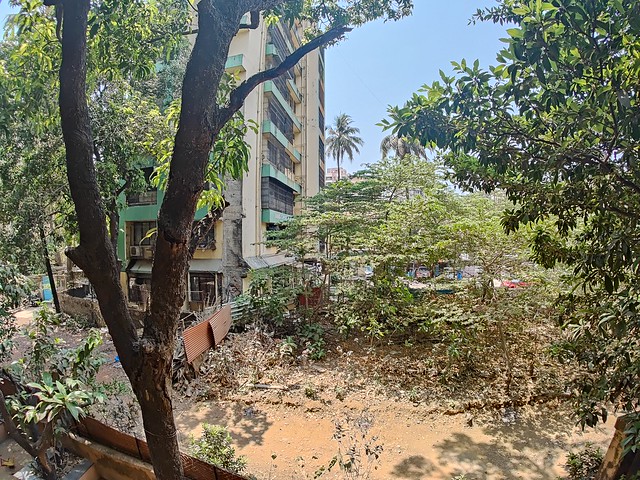 The primary 50 MP camera on the Realme GT 2 Pro also impressed at night. I was able to snap sharp and detailed images with little-to-no noise using the Night mode. Night mode also dealt with shadows well and images didn’t look overexposed. Additionally, the ultrawide camera also did well in the dark. Colour reproduction and dynamic range were on point on the ultrawide, although you will need a decent amount of ambient light in the scene.

The microscopic camera on the GT 2 Pro does feel a bit gimmicky. But it can get you some really good close-up shots, something you don’t see with the traditional macro cameras. A telephoto or periscope camera is still preferable, but this is the next best thing. The Realme GT 2 Pro also has a higher 32 MP selfie camera that could definitely use some work. The Realme GT 2 Pro can capture 8K video at 30fps or 4K video at up to 60fps on the main camera. However, you can only switch with the main and ultrawide cameras while recording in 4K resolution at 30fps. The front camera is still limited to 1080p video at 30fps. Apart from video, the Realme GT 2 Pro’s camera app has a ton of modes, including a Film mode, Slow-Mo mode, 3D Photo, the Tilt-Shift mode, and a 150-degree mode that includes the Fish-eye mode, a Starry mode, Dual video, and more. 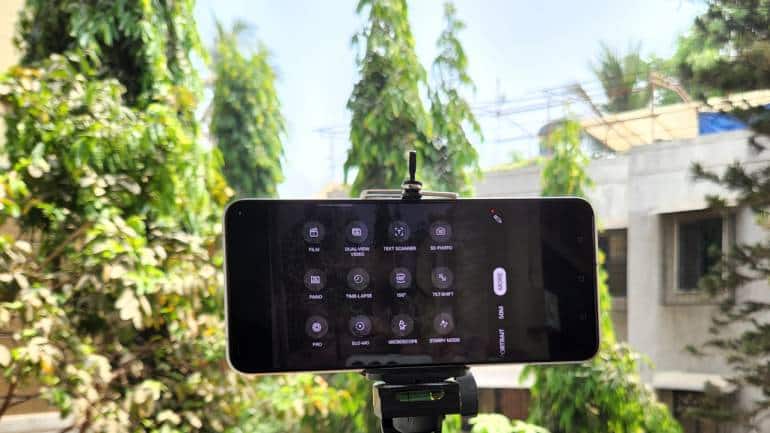 The Realme GT 2 Pro could have definitely used a telephoto or periscope lens. For a flagship killer, that’s about the only thing missing. However, the GT 2 Pro makes the best use of the cameras it does have. The new 50 MP ultrawide is definitely a step in the right direction, while the microscopic lens was a fun little addition. However, the star of the show here is the main camera, which doesn’t fail to impress. It also did well in scenes with complex lighting, although night photos could look a tad bit unrealistic, that may not be such a bad thing. The GT 2 Pro did struggle with video, while selfie performance could also use some work.

The Realme GT 2 Pro comes with a 5,000 mAh battery, which can deliver well over a day of use on a single charge. In my brief experience with the Realme GT 2 Pro, I found that the battery here was sufficient enough to take on the OnePlus 10 Pro. Additionally, the phone offers 65W fast-charging support with an adapter in the box. It may not be as fast as the 120W offered on the iQOO 9 Pro, but it still manages to get you a full charge in under 40 minutes.

On the software side, the GT 2 Pro runs Android 12 with the Realme UI 3.0 skin on top. There’s not a lot to say about Realme UI, it is more or less a cleaner take on Oppo’s ColorOS. Realme’s interface is easy to navigate and is relatively bloat-free. Realme has also committed to three years of major OS updates and four years of security updates with the Realme GT 2 Pro, which is quite respectable for an Android phone. We will dive more into Realme UI 3.0 in our full Realme GT 2 Pro review, which is coming next week.

The Realme GT 2 Pro is an excellent smartphone for its price. The handset does a lot of things right in key areas. It features reliable cameras, the best display in the segment, a standout design, superb performance, good software support, lasting battery life, and super-fast charging. The main Sony sensor paired with the 50 MP ultrawide is one of the best decisions Realme has made with the GT 2 Pro. Additionally, the 2K display gives it a category niche. There’s no doubt that Realme has a great phone on its hands, but that’s not to say it isn’t flawed. The GT 2 Pro’s plastic body takes away from the great design, but furthermore, the cameras are not quite worthy of flagship status. There’s also a lack of an IP68 rating and a third telephoto or periscope camera. As fun as the microscope camera is, it should have been an add-on to the third lens. There are aspects of a flagship missing on the Realme GT 2 Pro, but that can be down to the fact that this phone is over Rs 15,000 cheaper than the average premium smartphone in India. This makes the Realme GT 2 Pro one heck of a flagship killer and in my impression one of the best, if not the best, smartphones under Rs 50,000 in India.