OnePlus 10R Review: Speed is the name of the game

The OnePlus 10R doesn't just have a fast chipster, it offers extremely fast charging, and a super smooth display. But is 'speed' alone enough?

OnePlus launched its second smartphone in the 10 series in India back in April. The OnePlus 10R debuted as the first smartphone to introduce the MediaTek Dimensity 8100 chip in India. However, the chip isn’t the only star of the show here; there’s so much more to the OnePlus 10R than meets the eye.

First, let’s take a look at what’s in the box. Our model is titled the OnePlus 10R Endurance Edition and comes with the 150W charging adapter in the box. Apart from that, there’s an injector tool, a USB-C charging cable, and a silicone case in the box. Moving on to the phone, which is available in two colour options, Forrest Green and Sierra Black, ours arrived in the latter. Unlike most smartphones in the range, the OnePlus 10R has sharp edges rather than rounded ones, while the sides are flat on all sides. This gives the phone a more squarish look, akin to the Galaxy S22 (Review). Whatever your thoughts about this look, it sure is bold and I’m glad to see OnePlus is trying something new. The 10R also has a dual-panel design on the back panel, which consists of a plain matte finish and an array of strips on the back. The phone does have Gorilla Glass 5 protection on the front, but the frame is also made of plastic. The back and frame of the phone were well resistant to fingerprints, although the glossy plastic over the camera module does catch some smudges. The OnePlus 10R has the standard button placements but loses out on its trademark slider. You have the volume buttons on the left, a power button on the right, while the SIM tray and USB-C port sit on the bottom. Overall, it is easy to appreciate the design of the OnePlus 10R, even though the sharp edges aren’t quite as comfortable.

OnePlus has opted for a 6.7-inch Full HD+ Fluid AMOLED display for the 10R. The panel boasts a 120Hz dynamic refresh rate and a 360Hz touch sampling rate that can be boosted to 720Hz through the software when gaming. The display cycles between 120Hz, 90Hz, and 60Hz based on a user’s activity. The 10-bit colour display also supports HDR10+. You can also adjust colour temperature through the display settings manually or choose one of the preset options. The screen here also has good viewing angles and gets plenty bright. Bright enough that you can use the phone under direct sunlight. The display does have its caveats like the lack of HDR support while streaming Netflix. However, on balance, the OnePlus 10R’s display is one of the best in its class.

Moving on to performance and the OnePlus 10R debuted as the first smartphone in India to feature the MediaTek Dimensity 8100 mobile platform. Furthermore, the chip is paired with up to 12GB of LPDDR5 RAM and up to 256GB of UFS 3.1 storage. OnePlujs has also equipped the 10R with new and improved cooling. For those with misgivings about a MediaTek chip at a nearly Rs 40,000 price tag, it is worth noting that the Dimensity 8100 is one of the fastest smartphone chips out there. 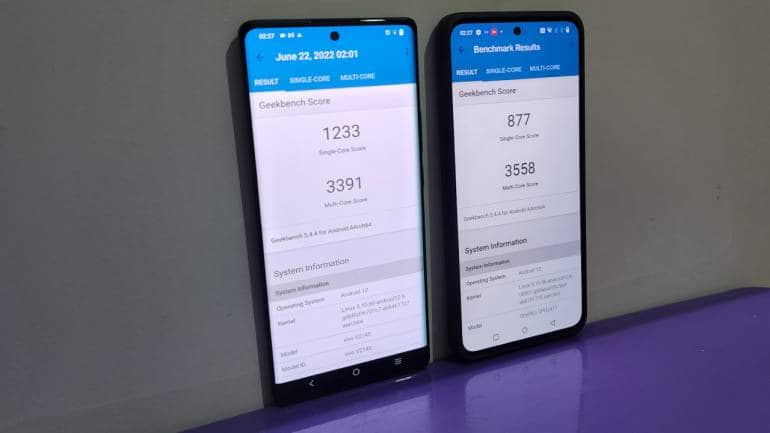 It managed a single-core score of 901 points and a multi-core score of 3910 points on Geekbench 5. For comparison, the score was similar to that of the OnePlus 9RT (Review), which uses the Snapdragon 888 SoC. In AnTuTu, the chip managed an overall score of 740012 points. Moving on to gaming and the OnePlus 10R could handle just about any title without much difficulty.

Diablo Immortal, Call of Duty: Mobile, and Apex Legends Mobile all ran smoothly on high settings, although you couldn’t quite max out both frame rates and graphics settings. Qualcomm’s chips do seem more adept for gaming, however, the MediaTek Dimensity 8100 SoC is quite powerful and gets the job done just fine. Overall, performance on the OnePlus 10R can easily cut it with the best flagship chips from Qualcomm.

For optics, the OnePlus 10R gets a triple-camera setup on the back with a 50 MP Sony IMX766 Quad-Bayer sensor at the helm. The main camera is paired with an 8 MP Sony IMX355 ultrawide unit and a 2 MP macro camera. On the front, the handset opts for a 16 MP selfie camera. Let’s take a look at some camera samples. In daylight, the OnePlus 10R’s main camera was fairly decent capturing photos with good dynamic range and crisp details. While the camera pumped out sharp images, although they do seem a tad bit oversaturated. The 10R did have an issue when dealing with shadows, underexposing them. The camera also features a 50 MP mode that helps capture more details in scenes, although the mode lacks HDR. The camera does tend to underperform in more complex lighting situations and is quite inconsistent.

Moving on to the ultrawide shooter and there wasn’t too much to complain about in broad daylight with good dynamic range in shots and decent detail. However, colours looked off from the main camera, while images looked noticeably softer. In more complex scenarios, like indoors or late evenings, the ultrawide didn’t fair too well as images looked much softer than I’d have liked. Like with the OnePlus 9RT, the macro camera was a hit or a miss, it rarely produced good shots and those shots required more time than I would have liked. 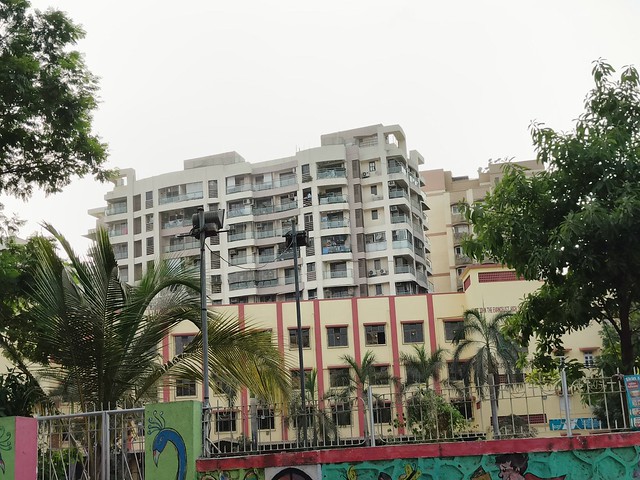 The OnePlus 10R does have the Nightscape that can be enabled on both the main camera and ultrawide lens. When taking pictures on the main camera, the night mode helps brighten up the scene, while reducing noise and maintaining detail in the shot. It also handled exposure well so as to not overexpose brighter areas in the scene. The ultrawide camera, however, did suffer in low light scenarios, Nightscape did introduce more light into the scene and reduced noise, but it didn’t make much of a difference in darker areas of the scene. Shots also looked softer with less detail, while the images noise was also much more noticeable.

The OnePlus 10R’s 16 MP selfie camera took detailed selfies with good exposure, although selfies weren’t the most detailed, even in bright daylight. Portrait selfies saw natural skin tones and good edge detection, so long as you have adequate ambient light. Low light selfies were fairly average, and I preferred using the flash as opposed to the Night mode. The OnePlus 10R can record 4K video at 30fps or 1080p video at 60fps on the main camera, while the ultrawide and front cameras are limited to 1080p video at 30fps. Considering the price of the phone, it is a shame that the 10R cannot do 4K video at 60fps. Additionally, there’s no stabilization at 4K, you’ll need to switch to 1080p. You can also use Video Nightscape in 1080p by switching on the AI. Overall, the cameras on the OnePlus 10R were just about average. The company could have done better considering the price of the 10R. The camera setup here wasn’t too different from sub-30K phones.

The OnePlus 10R packs a 5,000 mAh battery with 80W fast-charging support, although the Enhanced Edition with the 150W adapter has a smaller 4,500 mAh battery. However, it was safe to say that the smaller capacity didn’t do much in terms of hampering the phone’s battery life. Even under heavy usage, the OnePlus 10R’s battery lasted an entire day, although the super-fast charging was able to charge the device to 100 percent in under 20 minutes. 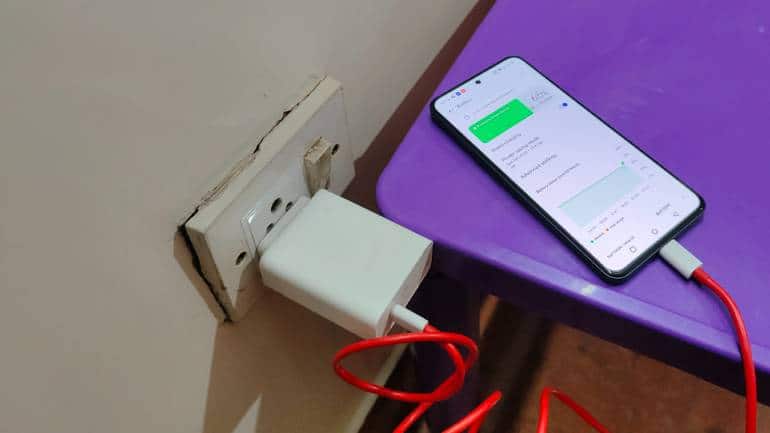 Additionally, the OnePlus 10R Enhanced Edition (150W) also comes with a Battery Health Engine to ensure that the battery remains in good condition when the phone is charging. OnePlus claims that this feature could extend the battery’s lifespan. The 10R offered solid battery life, although the super-fast charging speed can be really handy.

The OnePlus 10R runs Android 12 based on OxygenOS 12.1. OxygenOS still retains the stock Android aesthetic and is relatively clean. You can now drag the Shelf down from the right side of the screen, while the Widgets on the shelf are fully customisable. There’s a new Work-Life Balance mode and there’s a drag-down option for one-handed use. OxygenOS 12.1 also offers a more granular dark mode menu. OxygenOS has adopted some features and aesthetics of ColorOS, but the former is still the dominant force here. OnePlus is also offering two years of major OS updates and three years of security updates with the 10R.

With a Rs 43,999 price tag, the OnePlus 10R Enhanced Edition costs a pretty penny. But is it worth it? When it comes to performance, visuals, sound, software, design, battery life, and charging speed, the OnePlus 10R is definitely worth the price. However, that isn’t quite the case when you move to optics and build quality. There’s no doubt that the primary focus on the OnePlus 10R is speed, although this comes at the cost of balance. Considering the OnePlus 10R does sit in that flagship killer space, it would have been nice to see better cameras on the device. I think the vanilla version of the OnePlus 10R, with 80W charging, might be a better option for those looking out for a flagship killer. At this point, 150W charging, while cool, does seem like overkill. So, should you buy the OnePlus 10R; if you are looking for a uniquely designed phone with powerful hardware and good software, and super-fast charging, then the answer is an easy ‘yes’. If the main objective here was ‘speed’, then mission accomplished. However, camera performance does leave a little to be desired.
Carlsen Martin
Tags: #gaming #MediaTek #mobile gaming #OnePlus #Qualcomm Snapdragon #smartphones
first published: Jun 23, 2022 04:31 pm