Spotted by tipster Leopeva64, Microsoft is testing a dedicated Games panel within its Edge browser. Edge overtook Mozilla's Firefox in browser rankings this year, with a 5.96% market share in the US, at the end of September.

The adoption rates were bolstered when Microsoft re-launched the browser in 2020, with a new Chromium based framework, making it easy for Chrome and Firefox users to switch over.

It looks like Microsoft isn't done adding features yet and according to the latest leaks, it's testing a dedicated Games panel within the browser. 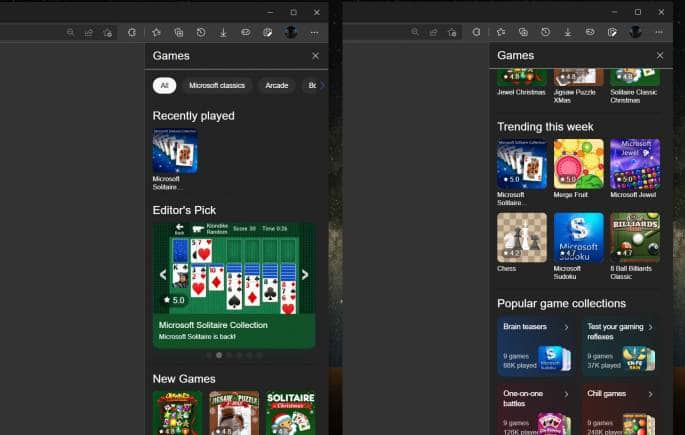 The feature is available to select users on the Canary preview builds and allows you to add a Games button next to the address bar.

When clicked on, the button launches a dedicated panel next to the browser window, showing you list of games, organised by categories such as puzzle, arcade, Microsoft classics, sports and more.

It's not clear when the feature will roll out to stable channels and in the hands of more users.

Recently, Microsoft made the Clarity Boost on its Xbox Cloud Gaming Service, exclusive to Edge. The Redmond software giant said it plans to roll out the feature to all users next year but did not announce any plants to support other browsers.
Invite your friends and family to sign up for MC Tech 3, our daily newsletter that breaks down the biggest tech and startup stories of the day
Moneycontrol News
Tags: #Chromium #Edge Canary #Google Chrome #Microsoft #Microsoft Edge
first published: Dec 30, 2021 01:36 pm