Vivo X60 Pro review: Should you buy this over OnePlus 9?

The Vivo X60 Pro comes with some major performance and camera improvements over its predecessor. Here is our Vivo X60 Pro review.

When Vivo launched the Vivo X50 Pro last year in India, we were taken aback by its imaging capabilities and overall functionality. The phone came with an industry-first gimbal-like stabilisation and also offered a whole lot of camera features. It also came with a sleek, premium design and a close-to-flagship level processor. Within a year, we have the successor to the Vivo X50 Pro. The Vivo X60 Pro launched in India comes with some improvements in the camera and the performance department. It also matches the OnePlus 9 with its price tag of Rs 49,999. Does the Vivo X60 Pro have what it takes to be the best smartphone under Rs 50,000? Should you buy this over the OnePlus 9? These questions and more answered in our Vivo X60 Pro review. 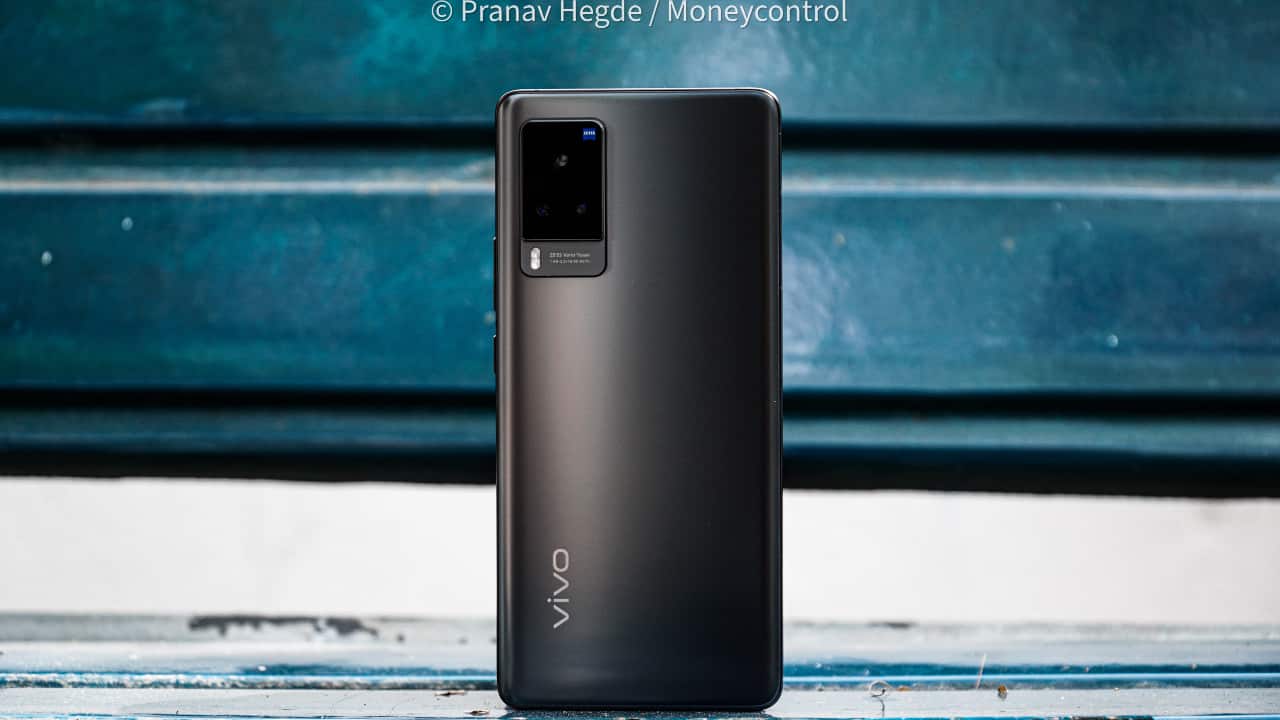 In terms of design, not much has changed since the Vivo X50 Pro. You get the same minimal frosted glass back design which is less prone to fingerprints. The back also has the same two-step camera module. However, the number of sensors has changed. More on the camera performance in the latter part of the review.

The aesthetic design is further complemented by its sleek and lightweight design. With a 7.59mm thickness and 177 grams of weight, the Vivo X60 Pro is among the most lightweight and ergonomic phones to hold. Add to it the curved edges that offer a better in-hand feel.

Vivo could have made some changes to the X60 Pro's rear panel design. We say so because the company has launched a few mid-range smartphones that sport a similar two-step camera module stacked on the rear panel. That last year's design does not make the X60 Pro look dated by any means though and it is still among the best-looking smartphones. 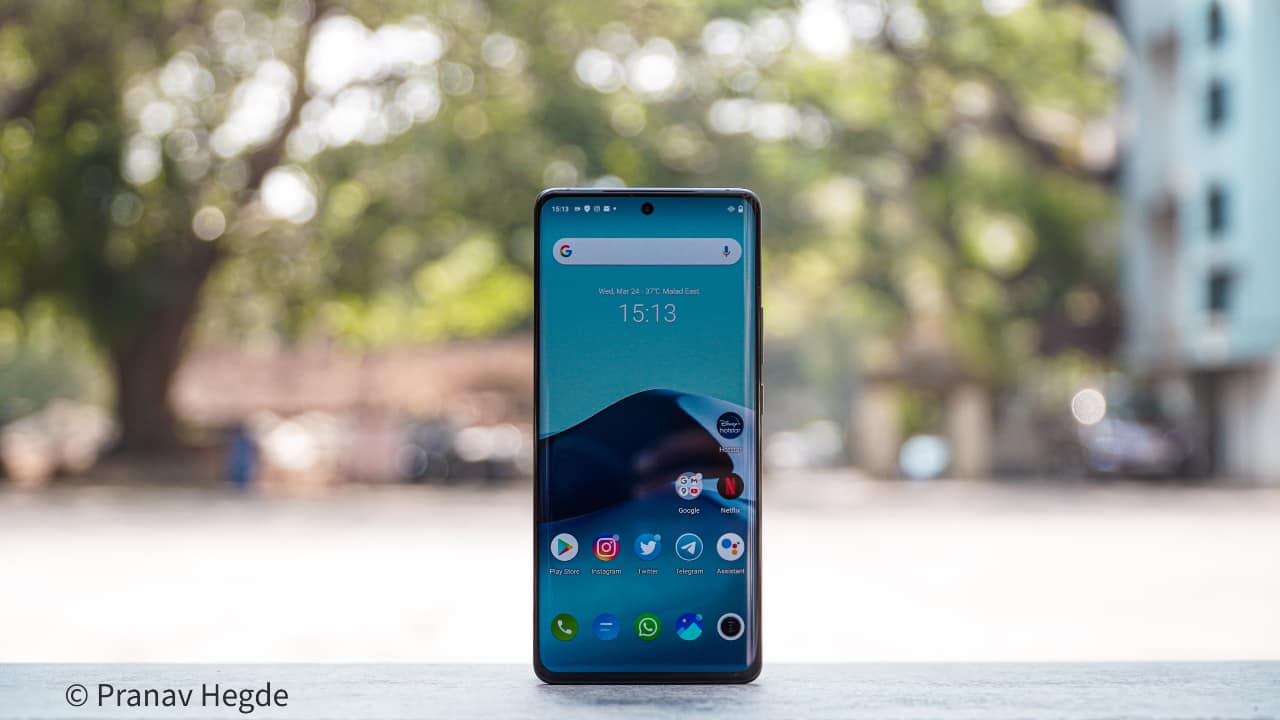 On the front is a 6.56-inch AMOLED panel. The Full HD+ display is sharp and offers punchy colours. It offers excellent viewing angles and our Vivo X60 Pro review unit’s display did not show any off-axis colour shifting either. It also comes with a 120Hz refresh rate display. We chose to set the refresh rate to “Smart Switch”, which switches between 60Hz and 120Hz depending on the kind of content or activity on the screen. There wasn’t any noticeable lag or stutter while using the device for our Vivo X60 Pro review. The screen is also HDR10+ certified and offers vibrant colours with enhanced contrast for a better viewing experience.

What makes the viewing experience even better is that almost bezel-less design. It curves slightly along the sides to offer a bezel-less look. Apart from the curved sides, the X60 Pro has a very thin top and chin bezel. The top bezel is a mere 1.75mm thick, whereas the bottom bezel is only 2.76mm. Vivo x60 Pro offers a 92.7 percent screen-to-body ratio, which is among the highest in its price range. What is disappointing though is the absence of a dual-speaker setup on a smartphone under Rs 50,000. There is no 3.5mm headphone jack either. The speaker grille on the bottom edge often got covered when we played games while holding the phone horizontally. Vivo should have offered a dual-speaker setup on the X60 Pro, as even devices under Rs 15,000 offer stereo speakers. While we are at it, let’s get into the performance review

Last year’s X50 Pro came with a Snapdragon 765G. While we were pretty satisfied with the overall performance of the device, word was that it doesn’t offer true value for the flagship price. Vivo has launched the X60 Pro with a Snapdragon 870 SoC, which sits right below the flagship Snapdragon 888 SoC. As expected, the flagship series chip offers enough power for a smooth gaming experience. We did not notice any lag during our Call of Duty Mobile sessions, which lasted for close to 2 hours on some days. 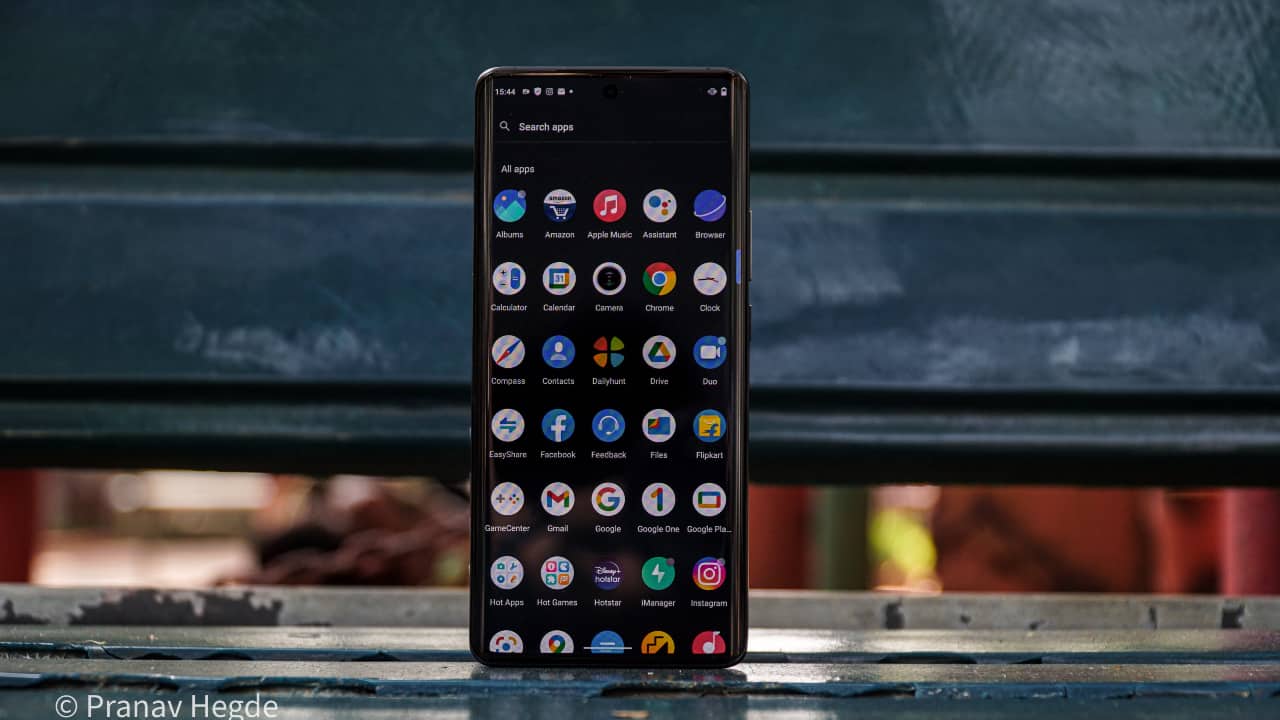 The device also offered a decent battery life, which was a few minutes short of five hours of screen-on time on average. On days when there was relatively less usage, the 4,200 mAh battery lasted for nearly six hours on a single charge. You get a 33W fast charger in the box to refuel the cell. It usually takes a few minutes over an hour to charge the device using the proprietary charging tech.

RAM management has also been quite good. The 12GB RAM is more than enough to keep apps running in the background and continue to load when you switch back. In case you do not want an app to shut down in the background, the multitasking windows give you an option to “lockdown” the app. There is also a Virtual RAM feature that offers an additional 3GB of RAM. It utilises the phone’s 256GB internal storage when the system needs more buffer memory. Vivo claims that you can open and switch between 20 apps. We tested the claim by opening Call of Duty Mobile first, followed by the likes of Asphalt 8 and Chrome. After opening around 15 apps and recording a video, we found that Call of Duty restarted. This could be due to multiple resource-hungry apps running in the background but in most cases, you would not experience this situation. 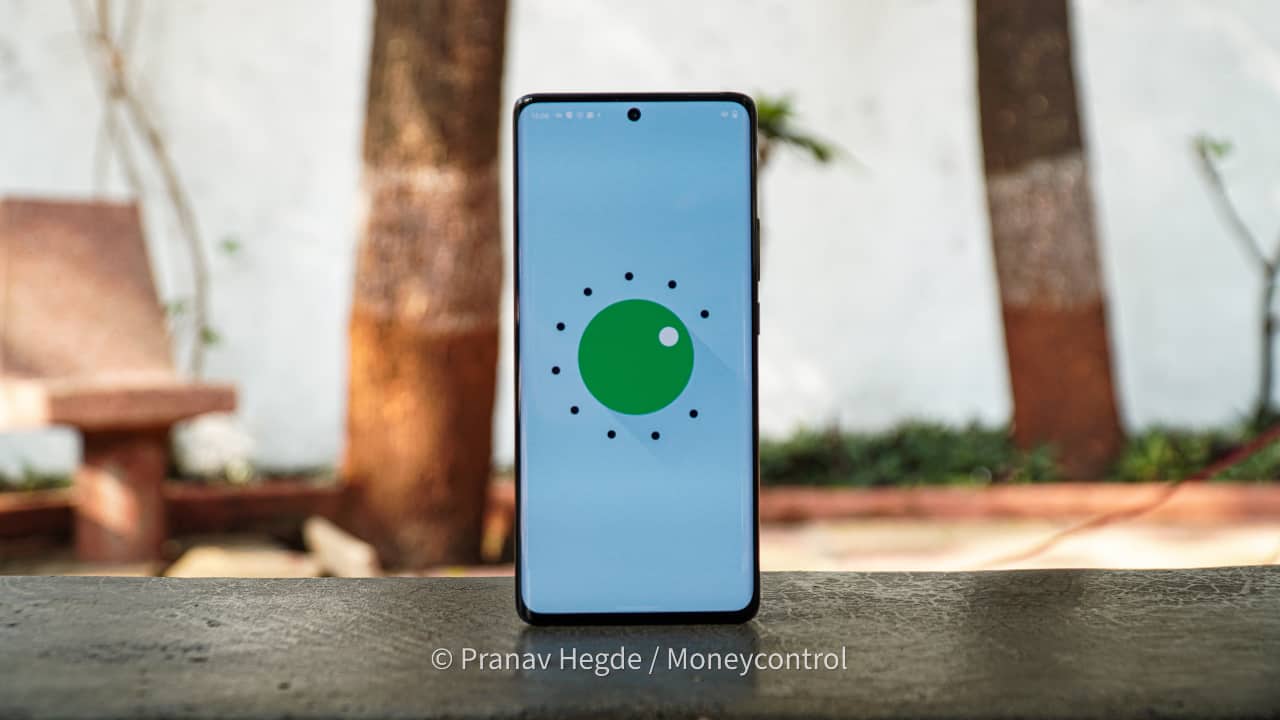 Coming to the software bit, the X60 Pro runs on Android 11-based Funtouch OS 11 out of the box. Vivo has incorporated a few gestures and custom features on top of Android 11 features that Google offers. The phone also comes pre-loaded with a few third-party apps like Moj, Flipkart, etc. You can choose to uninstall these apps.

Notably, the variant launched in China comes with Vivo’s new OriginOS 1.0. When we asked the reason for not launching its flagship series with the new custom skin, the company said that it is taking feedback from its users on the overall experience of the new UI. It is likely to launch future devices with Origin OS 1.0 in India depending on the overall response.

As we mentioned earlier, the X50 Pro impressed us with its overall camera performance. And so is the case with the X60 Pro. Vivo's betting big on the camera after its partnership with Zeiss. The triple-camera setup on the back comes with a 48MP Sony IMX598 sensor, a 13MP ultrawide lens, and a 13MP portrait lens. It misses out on the 8MP periscope lens, though, that is found on the Chinese variant and even on last year's Vivo X50 Pro. The primary camera clicks detailed shots in daylight. You get true-to-life colours, except for the Red and Orange colours that are slightly oversaturated at times. The dynamic range is among the best that we have seen on a smartphone's camera. A lot of the credit also goes to the camera's software algorithm. It also doubles up as a macro camera when you go very close to the subject.

In low light, the camera performs exceptionally well. There were times when we did not feel the need to use the dedicated night mode as the normal 'Photo' mode got the best details. It exposes the shadows well without overblowing the highlights. The camera’s AI Scene Detection feature did mess up with the exposure sometimes and we decided to simply disable it.

.@Vivo_India X60 Pro's main camera is so good that you might not need to use Night mode. To double-check, I had to click the same frame again. Pic 1,3 shot using Photo mode. Pic 2,4 shot using Night mode. Marginal difference visible only if you are trying hard to find it. pic.twitter.com/nPMCxxBRWp

The ultrawide shots showed a slight difference in colour temperature. We hope a software update fixes the warm colour tone. There is very minimum distortion compared to most ultrawide camera sensors. We also clicked a few portrait shots during the Vivo X60 Pro review and found that the edge detection is on point. The 13MP portrait sensor offers creamy bokeh, which does not look artificial.

As mentioned earlier, the camera app offers a lot of features. It comes with an improved 5-axis Gimbal Stabilisation 2.0 and Pixel Shift imaging technology. You can use the 'Ultra Stabilisation' mode to record videos when on the move. The tech underneath, combined with the software, manage to offer decent stabilisation when you are clicking hand-held photos and videos. Don’t expect it to work like an action camera and offers a super-stable output. We clicked a few hand-held long exposures using the Vivo X60 Pro. It also comes with features like Pro, Supermoon, Astro mode, etc.

In terms of selfies, the front camera is among the best you can get in the price range. It clicks detailed selfies and gets the skin tone correct most of the times. Edge detection in Portrait mode is also excellent and it did not blur out the ear or hair in any of our sample images.

Click on the Flickr slideshow below to check some sample images shot during our Vivo X60 Pro review. 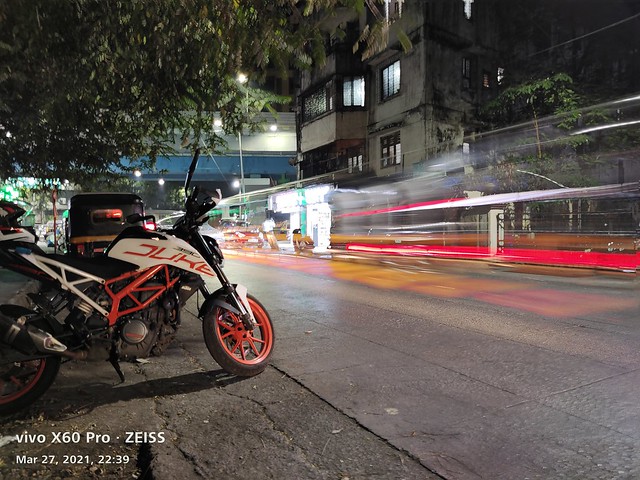 In the camera department, the Vivo X60 Pro has those minor, yet important improvements that make it a go-to device for the shutterbug in you. While last year’s X50 Pro inched towards optical excellence, the partnership with Zeiss has helped the Vivo X60 Pro leap further. Whether you buy the Vivo X60 Pro for its best-in-class, feature-rich camera or the boosted performance and elegant design, it is a win-win situation.

However, it is not the only smartphone that offers promising hardware. The OnePlus 9 is its closest competitor with the Hasselblad-tuned cameras. We are still testing the device for our OnePlus 9 review. While the OnePlus 9 camera does not have as many camera features as the Vivo X60 Pro, the device does offer a marginally faster Snapdragon 888 SoC and a bigger battery. It also comes with dual speakers, in case you want one.

Unlike us, if you are not a fan of the X60 Pro’s curved display, the OnePlus 9 comes with a 120Hz flat AMOLED panel. You can check our OnePlus 9 First Impressions here.