Dell's winning XPS formula has gotten even better, but it comes at a cost!

Dell recently upgraded its premium XPS lineup in India with the new XPS 13 and XPS 15 laptops. In past years, the XPS lineup has become the golden standard for premium laptops, and the new additions only serve to continue that legacy. Our focus today is on the XPS 13, which makes some noteworthy improvements across the board.

The new Dell XPS 13 (2020) brings just the right improvements on the display, performance, and design fronts, but there's a catch. At a starting price of Rs 1,44,807, the XPS does not come cheap. So, what exactly are you getting when you buy a premium XPS 13; well, stick around to find out.

The Dell XPS 13 is a venerable ultraportable notebook with a thin and light form factor and premium build quality. Measuring just 0.58 inches at its thickest point, it weighs no more than 2.8 pounds, the XPS is one of the smallest ultrabooks on the market.

From top to bottom, the XPS is an absolute showstopper. The notebook features a white winter theme. The XPS 13 boasts a frosted white lid with an anodised aluminium finish with a glossy Dell logo in the middle. Additionally, the new hinge design looks pretty refined and makes opening the laptop with a single finger quite easy. 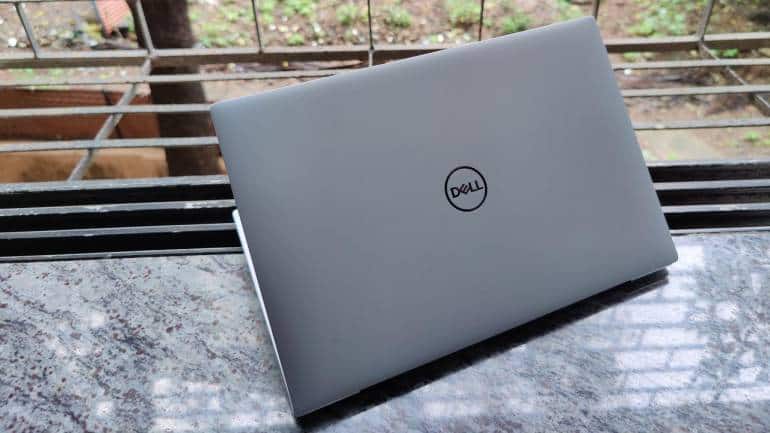 Since we are on the subject of opening the laptop, now would be a good time to talk about the beautiful, stain-proof Arctic White deck with the composite-fibre palm rest that is smooth to the touch. The palm rest is especially flashy and features a stain-resistant coating to prevent discolouration.

Dell has also given the keyboard and touchpad some attention. The keycaps are larger, while the touchpad has grown by a much-needed 17 percent. The XPS keys have a snappy with a satisfying feel thanks to a 1mm travel distance. The keyboard features an edge-to-edge layout with well-spaced out keys, despite the 9 percent larger keycaps. 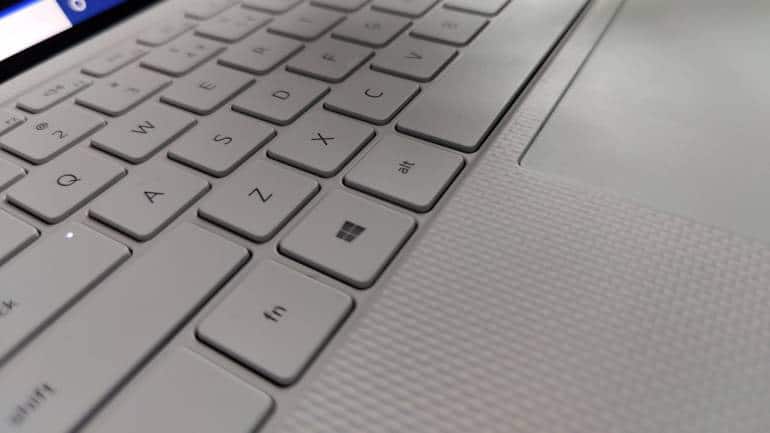 Additionally, the backlighting on the keyboard is also pretty good. The new XPS 13 has a glass touchpad with Windows Precision drivers. The touchpad is larger, giving you more room to navigate, while your fingers will glide across the surface with minimal effort. The bottom corners of the touchpad doubled as clickable buttons, delivering nice feedback. Overall, the keyboard and touchpad on the XPS 13 only serve to enhance the premium laptop experience.

The assortment of ports on the new XPS 13 is limited, to say the least. There are just two USB Type-C ports, a microSD card reader, and a headphone jack. Both the USB Type-C ports support Thunderbolt 3 data transfer speeds, which is about the only plus here. We would have certainly preferred at least one USB-A port here. However, lack of legacy ports is not uncommon among 13-inch laptops, although Dell has added an adapter in the box if you want to use a USB-Type A accessory. The Dell XPS 13 features bottom-firing speakers that are powerful enough to fill a small room. The audio on the XPS 13 is relatively clean and crisp, although bass isn’t too strong, there is a slight bit of distortion at maximum volume. For a 13-inch laptop, the sound is just about as good as it gets.

If you use your laptop for entertainment consumption, you will definitely appreciate the 13.4-inch 4K UHD+ IPS LCD touchscreen on the new XPS 13. The panel is equipped with 100 percent sRGB and 90 percent DCI P3 colour gamut, with a 1500:1 contrast ratio. It supports HDR content with Dolby Vision for the best viewing experience in this category. Additionally, the screen’s maximum brightness of 500 nits makes it ideal for use in bright outdoor environments. One of the biggest improvements on the new XPS 13’s screen is something that you may not even notice. Dell has made the panel 6.8-percent larger than the one on the 2019 XPS 13 model by trimming the bezels even further on the InfinityEdge. The thinner bezel at the bottom also enables a display with a 16:10 aspect ratio as compared to the traditional 16:9 aspect ratio commonly seen on most ultrabooks.

This is, without a doubt one of the brightest, most colourful screens on an ultrabook. The XPS 13 (2020) also arrives with a 1080p display, which is also quite impressive both in terms of colour accuracy and brightness. Additionally, the touch panel on our XPS model delivered accurate response, with fingerprint smudges the only thing you will have to worry about.

For performance, the new XPS 13 ditches Intel’s Comet Lake CPUs to opt for the new Ice Lake processors. Our model was equipped with an Intel Core i7-1065G7 processor with four cores and eight threads. Although this might seem like a downgrade as compared six-core, twelve-thread Intel Core i7-10710U on the 2019 model, it actually comes down to the task at hand. 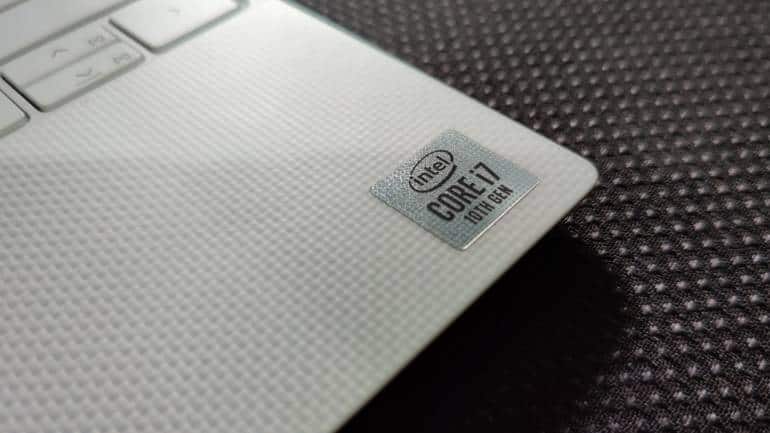 In Cinebench R15, the XPS 13 managed to score 756 points in the multi-core test and 187 points in the single-core test, well above the category average and better than most of its competitors. Cinebench R15 stresses the CPU to render complex images as opposed to the GPU. In our Geekbench 4.3 test, the XPS 13 managed an overall score of 19,071, another category-leading performance. The Intel CPU also achieved a 1,759 multi-core score in Cinebench R20.

For an integrated GPU, the Iris Plus is quite effective, delivering playable frame rates in several casual and competitive titles. Overwatch ran on low settings at an average 50fps, dropping to 40fps on medium. Heroes of the Storm consistently delivered 60fps on medium settings, while Counter Strike: Global Offensive averaged at 80fps in medium settings. Gaming performance has significantly improved, mainly in part due to the Iris Graphics. It is worth noting that all games were played on 1080p resolution.

Dell has also improved thermals on the XPS to the point where it is almost impossible to get this notebook to heat up outside gaming. The XPS 13 (2020) is arguably one of the best-cooled ultrabooks of 2020, generally avoiding transferring heat to the keyboard or trackpad. Overall, CPU performance on the Dell XPS 13 9300 sees marginal improvements, while GPU performance sees a huge leap.

The new XPS 13’s 52Wh battery lasted little over five hours on a single charge in terms of real-world usage. Now, five hours may not sound impressive and is well below the category average. However, when you consider our model sports a touch-enabled 4K UHD display, that number is actually quite decent. Moreover, the XPS 13 is a relatively small laptop, with a laptop of horsepower, so churning out over five hours is not too shabby. However, lowering the resolution to 1080p should get you a couple of extra hours. In terms of battery life, the XPS 13 (2020) was just about average, but that’s understandable given its 4K display. It is safe to assume that the 1080p XPS model will fare significantly better, and should be able to get you twice as much as on-time as the 4K variant.

The Dell XPS 13 supports both versions of Windows Hello with an IR webcam that can scan your face to unlock the device and a fingerprint scanner that doubles as a power button. Both the fingerprint reader and IR webcam works quite well, the latter in particular unlocks your machine before you make it to the keyboard, and you don’t even have to remove your glasses.

Despite its ultra-thin bezels, the XPS 13 retains its webcam. This is one of the smallest integrated webcams on a laptop. The 720p webcam does a decent job of capturing colour, although there is quite a fair bit of noise without much details. It gets the job done for video conferencing.

The XPS 13 (2020) takes Dell’s winning formula and improves on it, making this one of the best, if not the best premium laptop on the market. The improvements in performance over its predecessor are quite substantial, primarily due to Intel’s new Iris Plus graphics. And then there’s the display, which is just about as good as it gets for this price. Dell has also managed to offer even more screen real estate than before, trimming the bezels even further. 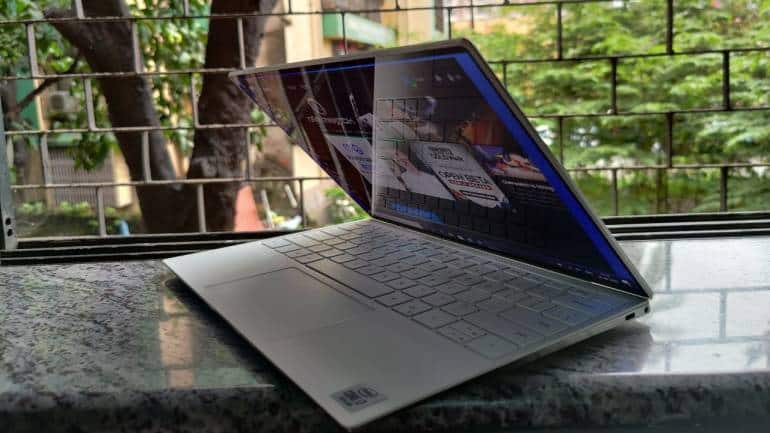 Battery life was an issue, but that is only because of the 4K touchscreen. Opting for a 1080p non-touch panel would undoubtedly churn out battery life in double digits. There is not much to say here, the XPS 13 (2020) does not have any standout features, it just does everything very well, just as a flagship laptop should.

In the areas that matter the most – performance, keyboard, design, build quality, display, and audio – the XPS 13 just about aces it, and if you opt for a 1080p model, you’d probably have to add battery to the list as well. However, the new Dell XPS 13 (2020) does not come cheap; in fact, it is one of the most expensive ultrabooks on the market.

So, to conclude this review, we’d leave you with one final thought that we hope will answer the question, “should I buy the new Dell XPS 13”. “Don’t buy the XPS if you need the XPS, buy the XPS because you want the XPS.” There are quite a few alternatives in the premium notebook space that are much cheaper than the XPS 13 (2020) and make a few affordable compromises. But in terms of offering the complete premium package, less than a handful come close to the XPS.