Hindustan Unilever's (HUL) quarterly result was a positive surprise. Benign raw material costs and lower promotional expense aided earnings amid a GST transition. Although the topline was boosted by price improvements, the underline volume growth was flattish. While GST was definitely a factor, given the expensive valuation of the stock, a few questions do present themselves.

In light of the good numbers, should investors look at the stock with excitement? Let's have a check. 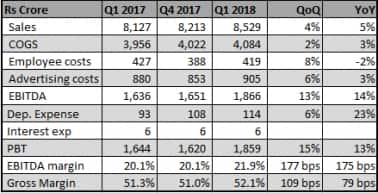 On the profitability front, EBITDA margins (21.9 percent) were ahead of expectations and posted a 175 bps improvement led by gross margins (+79 bps) expansion, lower employee and advertisement costs.

Lower raw material costs and the company's initiatives in cost savings like ZBB (Zero Based Budgeting) have been key drivers. In the medium-term, the management expects savings in the range of 6 percent of turnover through these initiatives, which is partly getting reflected.

On product segments, home care segment revenues were supported by continued improvement in both mass and premium categories of detergents wherein the company’s focus remains on the latter. The company expects upgradation from bars to detergents to continue, though it is likely that this trend is pushed a bit due to differential GST rates with higher rates of 28 percent for detergents.

Growth in personal care segment was reportedly impacted by channel destocking and lack of offtake in CSD or canteen store departments (last 45 days) as there is lack of clarity on GST reimbursement on this sale. As per the management, lack of CSD offtake impacted sales to the tune of 2 percent.

Volume Growth: More weakness before we witness a pick-up

The slowdown wasn’t completely unexpected as our channel checks had earlier suggested. However, the impact on the volume front is expected in the current quarter as well due to the gradual pick-up in GSTN coverage. So, the flattish volume growth observed in Q1 of 2018 can further deteriorate in the current quarter.

While GST impact may be transitional, there are some structural trends that deserve attention. The key factor being competitive pressures. Subdued performance in oral care should not be overlooked.

In this context, there are other product categories, like soaps and detergents, dish-washing products, wherein competitive intensity can increase.

That said, HUL is making its own efforts to increase its presence in categories that are witnessing interest from other FMCG players – Naturals/Ayurveda being a case in point. The company recently launched new products (skincare brand Citra) in this space.

The company deserves kudos for its financial performance and the quick transition to GST at the manufacturer’s level in a rather difficult quarter. Lack of volume pick-up amid GST transition in the lower end of supply chain makes it difficult to assess sustainable improvement in business as was hinted in the last quarter.

HUL is increasingly driving sales reach through direct distribution and thus contributing to a growing industry practice among main FMCG manufacturers. The impact of these changes on the volume performance will be clearer in the second half.

While current quarter grapples with the burden of the GST transition, investors got to focus on the business traction in coming days to gain conviction. Company’s key priority in the near-term is to restock channel pipeline in the next few months.

A large part of the recovery also hinges on growth in rural FMCG markets, which has been challenging for the company in the recent past. HUL expects a gradual recovery in rural demand as rural wages improve.

On the valuation front, stock is trading at 49x its expected earnings of FY18, implying an earnings yield of 2 percent, which is expensive view given the growth challenges.

We would prefer to wait for a sustainable traction on volume growth and advise investors to remain on the sidelines in the near-term and watch out how each of these variables namely, GST roll-out, continued disruption from competitive intensity and rural recovery, pan out.