Onion – an ordinary vegetable – is a crucial political commodity given its long-standing history of overturning governments in India.

The price of onion has been hovering above Rs 100 per kilogram for over a month leaving the entire nation wailing. Skyrocketed prices of this key kitchen staple has not only left households teary-eyed but traders, wholesalers, and farmers have also been equally affected as people are beginning to cut back using the costly bulb.

Scores of small restaurants are also feeling the pinch as rising prices of onion is taking a hit on their business. While some restaurants are opting to pass on the burden to customers, many others are mulling over reducing the usage of onion until the situation stabilises.

The power of the bulb, which is an essential utility item for the rich as it is for the poor, can be seen in ways that it is tempting thieves, destroying livelihoods and putting a question mark on the policies of the Prime Minister Narendra Modi-led government.

Even as the Centre is taking steps to tackle the onion crisis, the Opposition is leaving no opportunity to target the government over the exponential spike in onion prices.

The primary reason that the Centre should be jittery is because onion prices have had the potential to topple governments in the past.

What has led to the rise in onion prices?

The sudden rise in the price of this ubiquitous kitchen item has been officially attributed to a decline in domestic production during kharif (harvested after October) and late-kharif (harvested in January- March) seasons because of late monsoon followed by excess rains in major producing states such as Maharashtra and Karnataka.

There is a shortfall in production by over 15.8 lakh tonnes this year, as per the data provided by Agriculture Minister Narendra Singh Tomar in Lok Sabha. According to the minister, states had estimated production of onion to be over 69.9 lakh tonnes by November 30 in this season, but the actual production is likely to be 53.67 lakh tonnes.

The heavy unseasonal rainfall which lashed Madhya Pradesh, Rajasthan and Gujarat in September also contributed to the price rise as it damaged the ready crop in these states.

What is the average rate of onion prevailing in the country?

The price of this kitchen essential has been rising steadily in the country. It started to climb from September and has averaged over Rs 100 per kg since November 25.

Since then, the price has hovered over the Rs 100 per kg mark in most states. The rates are as high as Rs 165/kg in Panaji (Goa).

In Bengaluru, Wayanad, Ramanathapuram and Port Blair, the rates stood at Rs 140 per kg.

Why does the onion matter so much?

Onion is a staple in kitchen and an essential ingredient in most cuisines. Therefore, an increase in the price of the bulb affects a large section of the society including farmers, traders, wholesalers and households.

The price rise has also adversely affected the business of street-side food vendors and small restaurants.

Bitan Mukherjee, co-owner of a retro-themed cafe in Kolkata told PTI that the skyrocketing prices of onions were affecting the profit margin in the restaurant, adding that he would be compelled to increase the rate of items if the situation does not stabilise.

In talks with the news agency, Promod Jha, a jhalmuri seller in central Kolkata, said he was forced to replace onion with a generous amount of chillies and black pepper. "I used to buy 4-5 kg of onion every day. Now, I can't afford. Hopefully, my customers will understand my situation," he added.

The importance of the vegetable is also being seen in unexpected ways; the rise in its price is tempting thievery. The police has registered cases for missing onions, launched probes, arrested people and recovered the bulb from them.

In one such incident, cops arrested two persons for allegedly stealing 168 kgs of onion worth Rs 20,160 in south Mumbai. Yet they could recover only 68 kgs of onions from the duo.

A case has also been registered against Union Minister of Consumer Affairs Ram Vilas Pawan for "misleading and cheating" people on the rise in the price of onion. It was filed by a person named M Raju Nayyar in Muzaffarpur Civil Court who said that Paswan misled people through his statement that the price of the vegetable has gone up due to its black marketing.

The crisis has given an opportunity to social media users, who have let out a barrage of memes. From targetting the government to pointing out problems of the common man, people have flooded social media platforms with posts about the rising unaffordability of the essential food item.

How does onion affect politics?

Onion – an ordinary vegetable – is a crucial political commodity given its long-standing history of overturning governments in India.

The political footprint of onion was established in the 1980 general elections when Indira Gandhi, who had suffered a defeat after she proclaimed Emergency from 1975 to 1977, rose back to power by making onion prices a populist rallying cry. Waving garlands of onions at political gatherings, she thrashed the ruling government for its failure to control prices.

According to a report published in The Washington Post on January 9, 1980, the price of onions fell on the day Indira Gandhi's party made a landslide victory. 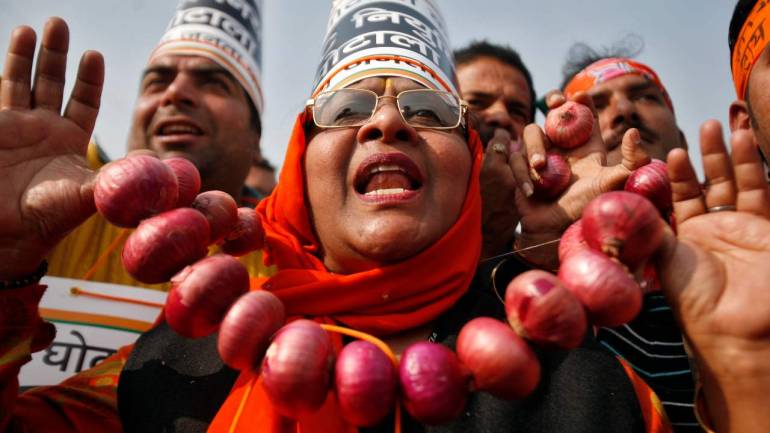 The onion again showed its influence on the country's politics in 1998, when it was regarded as the deciding factor in the Delhi and Rajasthan Assembly elections. In Delhi, the late Sushma Swaraj-led government faced the wrath of angry citizens as the BJP lost the state polls to Congress despite performing well in Lok Sabha elections, which had concluded months ago. Similarly, an onion crisis, which was set off by unseasonal rains, ended up  snatching power from the BJP government in Rajasthan. 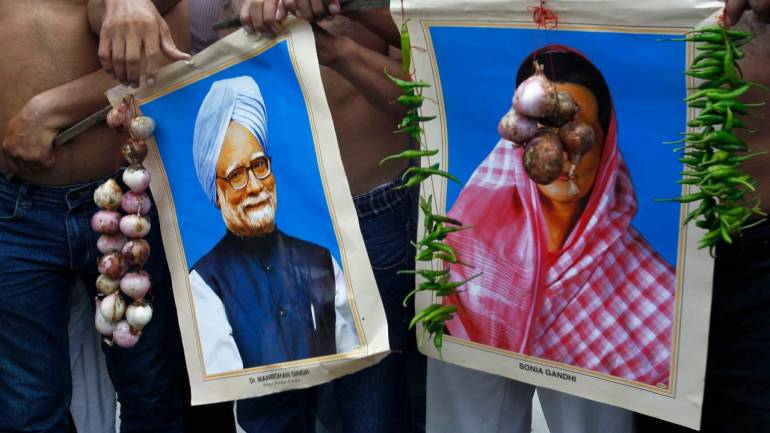 In 2010, the country witnessed a dramatic rise in the cost of onion across markets due to shortage of onion production because of erratic rainfall in the onion producing belts across the country. The crisis led to simmering political tensions in the country and was described as "a grave concern" by the then Prime Minister Manmohan Singh.

In response, Singh banned onion exports, lowered import taxes and got shipments of onions from neighbouring Pakistan, which ultimately lowered the price of the bulb in India.

Now that it is evident that onion has impacted India's politics, let us understand why.

Put simply, if the price of the essential commodity is shooting high, it is most likely to anger a large bloc of voters – be they everyday-households, farmers, wholesalers, or anyone engaging in selling or purchasing onion.

Tn the present year too, the Opposition has gotten enough fodder in the rise in price of onion and is leaving no stone unturned to target the ruling dispensation; even as the PM Modi-led NDA government is trying to defuse the onion bomb before it explodes.

Union Minister Nirmala Sitharaman recently drew criticism when she said that she comes from a family that "doesn't care much about onions and garlic", in reply to a question over rising onion prices by NCP MP Supriya Sule in Lok Sabha.

The minister was targetted on her statement by former finance minister P Chidambaram. The Congress leader, who was recently given bail in the INX Media case,  said that if "she doesn't eat onions, what does she eat? Does she eat Avocado?"

Congress leader Priyanka Gandhi also criticised the Sitharaman, saying, "It is good to know that you do not eat onions and garlic yourself. But you are the finance minister of the country, not of yourself. The common man is being looted by the soaring prices of onions and garlic, so you have to find a solution."

What could be a viable solution?

Every time onion prices soar, the standard response of the government is the imposition of a minimum export price (MEP), and resorting to imports. In the current crisis as well, similar steps have been taken.

But is that enough?

Experts believe that such policies are only a temporary solution to evade the crisis. Besides, they deprive the farmers of whatever little benefits they get from onion exports. The country needs a robust long-term solution.

According to observers, the annual see-sawing of onion prices is primarily due to hoarding and not because of supply constraints.

However, the government seems to have taken cognizance of the issue, which is seen in the Centre reducing the stock holding limit for onion to 25 tonnes from 50 tonnes for wholesalers and to two tonnes from five tonnes for retail traders.

The Ministry of Consumer Affairs has also directed the state governments to carry out immediate anti-hoarding operations to ensure that the supply in the markets are augmented and stock holding limits are strictly enforced.

Besides, the Centre has recently decided to import an additional 12,660 tonnes of onions and the shipment will reach India from December 27 onward, a move aimed at improving domestic supply and curtailing price rise.

With this, the total quantity of imports that have been contracted so far reached approximately 30,000 tonnes, according to an official statement.

However, the government needs to mull over long-term solutions to prevent the crisis in future. These include observing weather patterns early with the help of advanced technology and managing the crops accordingly.

Better water management is a dire need to save the crop from damage in situations like drought and excessive rainfall.

Provision of suitable, safe and cheap storage facilities to farmers can save the bulb from rotting, thus helping them sell their full crops at a reasonable price.

Currently, the country is bearing the brunt of high onion price, which will remain firm till the first week of January when the late-kharif onion crop is expected to hit the market.Get access to India's fastest growing financial subscriptions service Moneycontrol Pro for as little as Rs 599 for first year. Use the code "GETPRO". Moneycontrol Pro offers you all the information you need for wealth creation including actionable investment ideas, independent research and insights & analysis For more information, check out the Moneycontrol website or mobile app.