The policy, formulated by the Ministry of Civil Aviation, has created a huge base for a drone ecosystem in the country.

The global market for drones and drone powered solutions is expected to cross $100 billion by 2023, and India seems to be on the right track to cash on in this sector. The country's newly-announced Drone Regulation 1.0 is a step to open up the use of Remotely Piloted Aircraft (RPAs) — commonly known as drones — for commercial activities.

The regulations will be enhanced in 2019, multiple industries stakeholders told Moneycontrol, adding that the drone industry could see a huge market in the near future.

The policy, which has been formulated by the Ministry of Civil Aviation has created a huge base for a drone ecosystem in the country. By lifting the blanket ban on activities related to drones, companies will now be able to utilise RPAs for commercial purposes.

However, experts have called the existing policy "restrictive in terms of usage, height and weight limits" of drones, which gives "very little leeway for commercial usage". They believe the government could go on to relax the policy in 2019, which would open a broader gateway for industries to leverage the unmanned aviation vehicle (UAV) technology.

What is Drone Regulations 1.0?

Drone Regulations 1.0 allows RPAs to be used commercially and came into effect on December 1, 2018. It defines drones as a technology platform, classifies RPAs, fly zones, and what approvals are needed to operate them commercially and otherwise.

As per the regulation, RPAs have been categoried as nano, micro, small, medium and large, on the basis of weight. 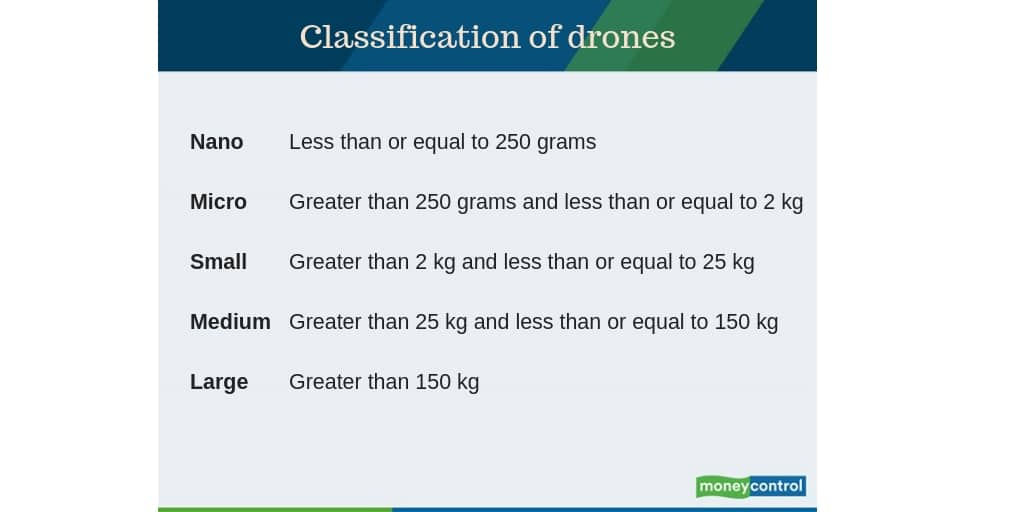 Operations of drones for commercial and general use will be restricted to the following conditions:

Terming the policy a "good start", Amber Dubey, partner and India head of aerospace and defence at global consultancy KPMG said that having a policy and regulations thereof is definitely better than not having one.

Mughilan T, Co-founder and CEO of Skylark Drones that provides drones solutions for enterprises is of the view that the policy has the potential to create conditions for Indian companies to innovate products for global use.

Opportunities and challenges for RPAs in certain sectors

Food delivery platform Zomato welcomed the government's move and said that it would be a "game changer in the food delivery space".

"The factors which crippled the sector in the past years are now in favour of its development. So with the right set of people, favourable government regulations and aerial technological advancements, drone delivery will be a game changer in the food delivery space," a company spokesperson told Moneycontrol.

The food-tech firm that acquired TechEagle -- a Lucknow-based drone startup -- in 2018, is currently working on devising hub-to-hub delivery networks and designing multi-rotor drones that can pick up a payload of under 5 kg.

Asked about the expected benefits of using drone technology for food delivery, the spokesperson said, "Delivery via drones will help us reduce the last mile delivery leg and make the process more convenient and cost-effective. UAVs will significantly mitigate the delivery time while also increasing our reach."

The company would go on to run a pilot project in Delhi-NCR after finishing thorough testing and procuring all licences as directed by DGCA. It will eventually scale operations to other cities where it is offering food delivery services.

However, experts suggest that the commercial delivery of food via drones will not start in 2019. "Drone deliveries is definitely a possibility but we may not have a scenario where you can place food orders and get them delivered home anytime soon. This is because you need a lot of other infrastructure to enable delivery of food via drones, which will take at least a couple of years to develop and test,” Mughilan said.

Construction is one of the most dynamic, responsive and unique sectors in the Indian economy. On a typical construction project, hazards are a recurrent feature, especially as equipment and materials keep moving around a site. Instead of safety managers physically conducting site "walk-throughs" to identify potential hazards, UAVs and drones can be deployed to conduct safer, faster and more accurate inspections, according to a November 2018 PwC analysis report.

Nonetheless, Mughilan added, "The market size for enterprise-grade applications of drones in sectors such as construction in a fast-growing economy like India can be huge."

Farming is an area where drones have the most potential to expedite and redress major challenges. Successful adoption of drone technology for agricultural purpose has been seen in several foreign countries. Similarly, it has a huge potential in the Indian agricultural sector. "Drones have huge applications in agriculture in terms of crop imaging and spraying of seeds, fertilisers and pesticides. Drone Regulations 1.0 does not permit delivery of payloads and this restricts usage of RPAs. Given the small land-holdings in India, and availability of cheap farm labour, large scale usage of drones for crop imaging and spraying operations may take some time," said Dubey.

Enterprises and experts expect relaxation in the policy to make drone solutions more efficient for businesses and the economy.

"Drone Regulations 1.0 has proved to be a significant milestone and we're confident that the further developments expected in the foreseeable future will facilitate the ease of doing business and help create a robust ecosystem for the future of food delivery in India," the Zomato spokesperson added.

According to Dubey, India has an opportunity to leapfrog from its current low ranking in terms of commercial aircraft manufacturing to becoming a global leader in research, design and manufacturing of RPAs. This may require the government, regulators, academia, funding institutions and industry to work in a coordinated manner, he explained.

Dubey noted that Drone Regulations 2.0, expected in late 2019, could enable beyond visual line of sight (BVLOS) operations, delivery of payloads and automation of the air traffic management. One pilot could also be allowed to operate multiple RPAs.