UPCOMING EVENT:Know how Global Investing can be spread beyond the US markets by joining an engaging webinar on November 30, 11:30 a.m.
you are here: HomeNewsIndia

The 17th Lok Sabha is all set to assume office in early June, reports suggest. This is after the Bharatiya Janata Party (BJP)-led National Democratic Alliance (NDA) retained power, winning over 350 Lok Sabha seats. The BJP itself emerged victorious in over 300 seats.

Results of the Lok Sabha elections from 542 out of 543 parliamentary constituencies were declared on May 23. Polling was cancelled in Tamil Nadu’s Vellore after a cash haul. Voters in Vellore will elect a Member of Parliament (MP) at a later date.

Here’s a look at the composition of the 17th Lok Sabha and members who will sit in the Lower House of Parliament for the next five-year term.

Political parties are categorised ‘national parties’, ‘state parties’, etc. According to an analysis by PRS Legislative Research, 397 out of the 542 MPs come from national parties. These include 52 from the Congress and 22 from the Trinamool Congress, among others.

The remaining MPs are from state parties such as the Dravida Munnetra Kazhagam (DMK) from Tamil Nadu and the Yuvajana Sramika Raithu Congress Party (YSRCP) from Andhra Pradesh.

A whopping 300 out of the 542 MPs have been elected to the Lower House of the first time.

A total of 197 MPs, who were in the 16th Lok Sabha, have been re-elected. In the outgoing Lok Sabha, 314 MPs were first-time members.

The average age of the 17th Lok Sabha is 54 years. According to analysis by PRS, about 12 percent of these MPs are below the age of 40 while 6 percent are about the age of 70.

The youngest MP to be elected this time is 25-year-old Chandrani Murmu. Murmu, a tribal woman, won the Keonjhar Lok Sabha seat in Odisha. She represents the Biju Janata Dal (BJD).

In fact, at the age of 25 years and 11 months, the engineering graduate has become the youngest MP. 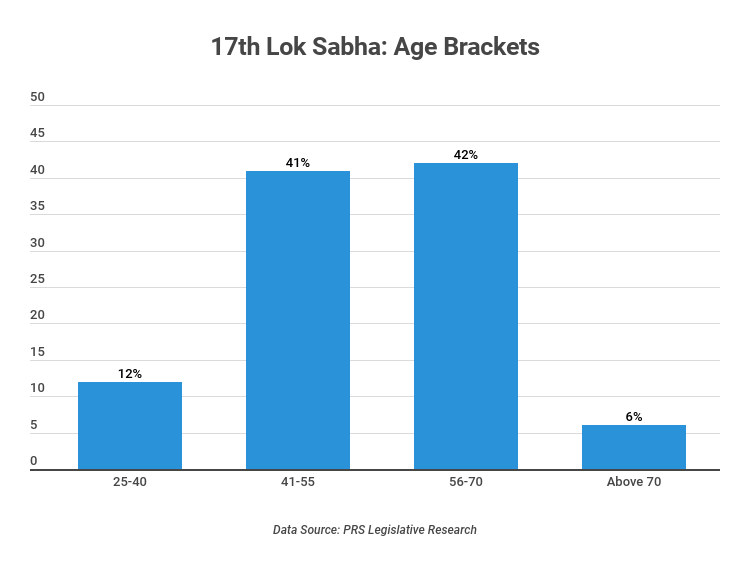 Age bracket of MPs in the 17th Lok Sabha

About 43 percent of the MPs in Lok Sabha are now graduates. Another 25 percent are post-graduates. Only four percent have a doctorate. This means, 349 MPs are at least graduates. 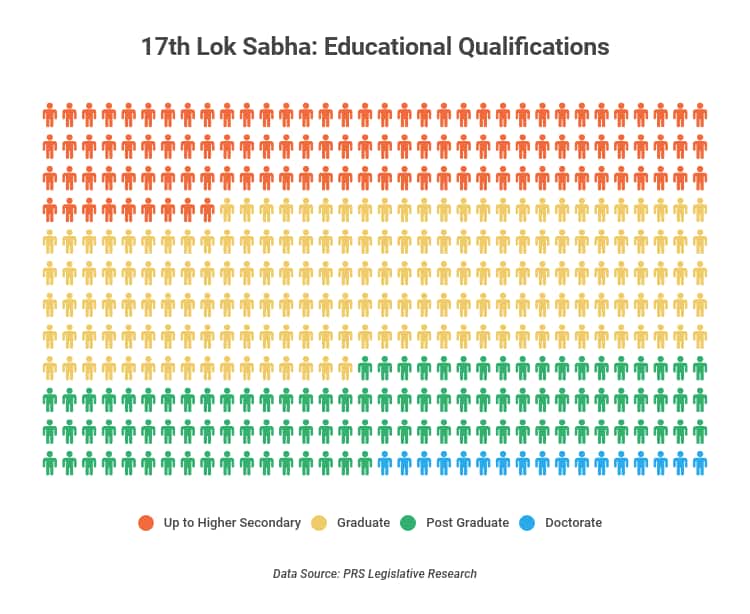 Educational qualifications of MPs in the 17th Lok Sabha

Women in the Lower House

As many as 78 women have been elected to the Lok Sabha. This is the highest representation of women the Lower House has ever seen. The number is up from what was 62 in 2014.

However, this 14 percent representation is significantly less than what is seen in other countries such as Bangladesh (21 percent), United States (24 percent) and United Kingdom (32 percent). Women in the 17th Lok Sabha

Members of the new Lok Sabha come from diverse professional backgrounds. These include artists, medical practitioners, agriculture, business, lawyers and political and social services, among others.

Around 39 percent MPs come from a political or social work background. This is followed by people coming from agricultural activities (38 percent). About 23 percent are businessmen.

A total of 475 members are 'crorepatis'. Madhya Pradesh Chief Minister Kamal Nath's son Nakul Nath, who won the family bastion Chhindwara, tops the list according to analysis by Association of Democratic Reforms (ADR).

ADR analysed affidavits on assets and liabilities of 539 new MPs. The organisation was unable to access affidavits of three new MPs — two of the BJP and one of the Congress.