Simultaneous Lok Sabha and Assembly elections will be held in the state on April 11. The results will announced on May 23.

Voters in poll-bound Andhra Pradesh have rated the performance of the incumbent N Chandrababu led-government as "below average" across the state, reveals a survey conducted by the Association for the Democratic Reforms (ADR).

As the truncated state is inching closer to its first independent Assembly elections, the voters are set to elect a fresh government.

There is a multi-cornered fight in the state with no major parties contesting in alliances. The ruling Telugu Desam Party (TDP), which contested previous state elections in alliance with the Bharatiya Janata Party (BJP) and actor-turned-politician Pawan Kalyan’s Jana Sena Party (JSP), is going it alone this time.

Naidu’s TDP is making all efforts to woo voters and retain power.

Ahead of the April 11 polls, the ruling party is promoting work done by the government. However, the people of Andhra Pradesh feel that the government has performed "below average" in delivering key promises.

The ADR survey gives a sneak peek of the voters’ priorities in Andhra Pradesh and how the government performed on it. The survey covered approximately 12,500 respondents across all 25 parliamentary constituencies of the state. They listed their priorities and also rated the performance of the government as 'good', 'average' or 'bad', which were equal to 5, 3 and 1, respectively.

As per respondents, their main priorities were 'better employment opportunities', 'drinking water' and 'better hospitals or primary healthcare centres'.

However, the government performed "below average" on all three issues. 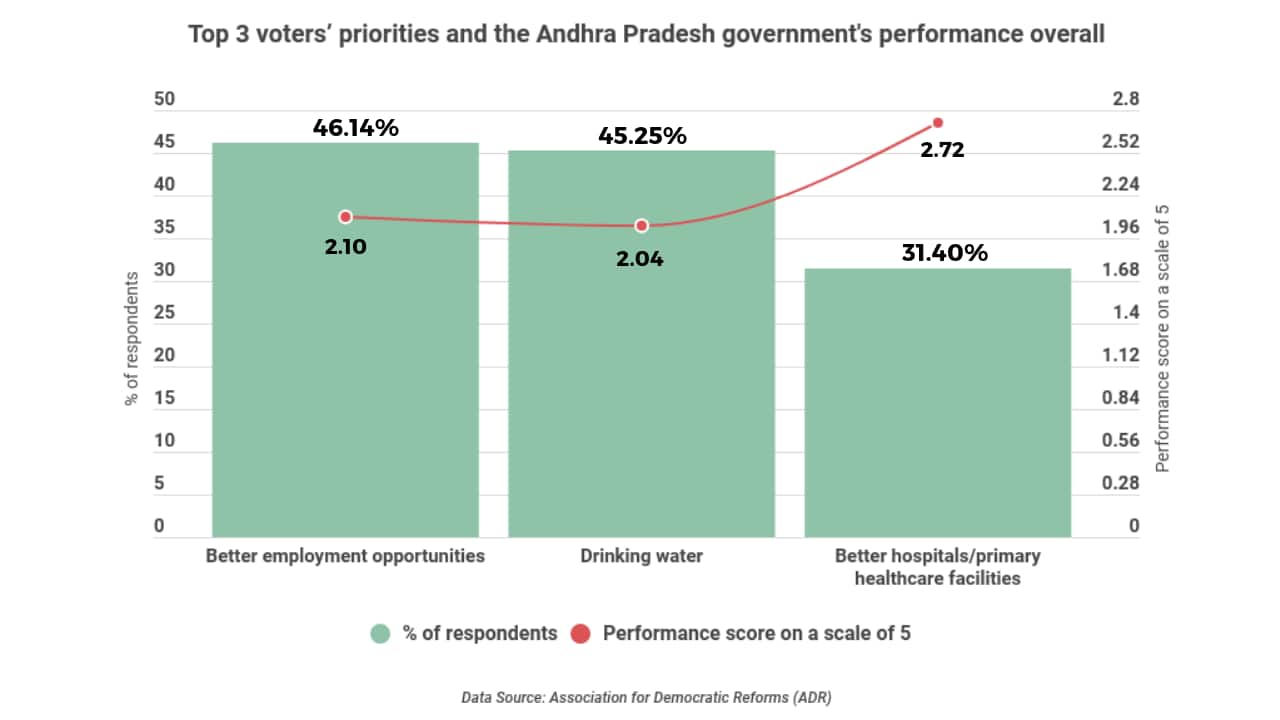 As AP's population is divided into rural and urban, so were the issues of people residing in the two different regions. Take a look: > Among the top 10 most important issues, data suggests that "availability of water for agriculture" was the most important rural issue for 48 percent of the rural respondents.

Performance (2.13/5): The respondents seem to be unhappy with TDP’s work on the issue. The party has received a "below average" rating from respondents.

> The third important issue was to get 'electricity for agriculture', as 44 percent considered it to be the most relevant issue.

Performance (2.19/5): The government's work in the sector has again been rated "below average" by the respondents. > According to the survey, "better employment opportunities" was the most important urban issue with 58 percent respondents saying so.

Performance (2.13/5): The performance of the government disappointed the urban population on this front as they rated it "below average".

> The next important urban issue was "availability of drinking water" with 55 percent marking it as their topmost priority.

Performance (1.91/5): The government fared rather poorly according to the respondents.

> The third important issue was "water and air pollution", as 53 percent of the urban population considered it to be the most relevant issue.

Performance (2.19/5): The government’s work in the sector has been rated "below average".

Simultaneous Lok Sabha and Assembly elections will be held in the state on April 11. The results will announced on May 23.