Despite stern warnings by no less than the Supreme Court last year, paddy stubble burning by framers continue unabated in Punjab and other parts as experts fear that North India will again struggle to breathe this winter.

Last November, the Supreme Court of India pulled up the Punjab and Haryana governments for their inability to prevent pollution caused by stubble burning despite previous orders. The Bench of Justices Arun Mishra and Deepak Gupta while calling Delhi “worse than hell” said toxic fumes over the Capital from stubble in the two neighbouring states were “reminiscent of an internal war”.

“Why are people being forced to live in gas chambers?” asked Justice Mishra, now retired.

Strong words as these were, and coming from no less than India’s top court, one would have been forgiven for expecting a sea change in the state of affairs this year.

Truth is stubble burning has not missed a beat and is back in all its raging ferocity ahead of harvesting season. Satellite images from the United States space agency, the National Aeronautics and Space Administration (Nasa) have shown that the farmers have started burning the crop residue in parts of Punjab and Haryana. Data from Nasa’s fire information for resource management system (FIRMS) shows a gradual jump in detection of fires in farmlands in recent days.

Experts fear the worst in the coming days.

“This year, stubble burning has just started in a few districts of Punjab. We use satellite data to get the number of fires and the amount of aerosols in the atmosphere from the fires,” Pawan Gupta, a research scientist at the USA-based Goddard Earth Sciences Technology and Research (GESTAR), Universities Space Research Association told Moneycontrol by email.

In the past one week more than hundred fires were detected in Punjab’s Amritsar, and they are increasing and generating smoke creating hazy conditions over certain parts of northern India, he said. Apart from Amritsar, the other districts witnessing farm fires are Tarn Taran, Firozpur, and Kapurthala, Mansa and Jalandhar. 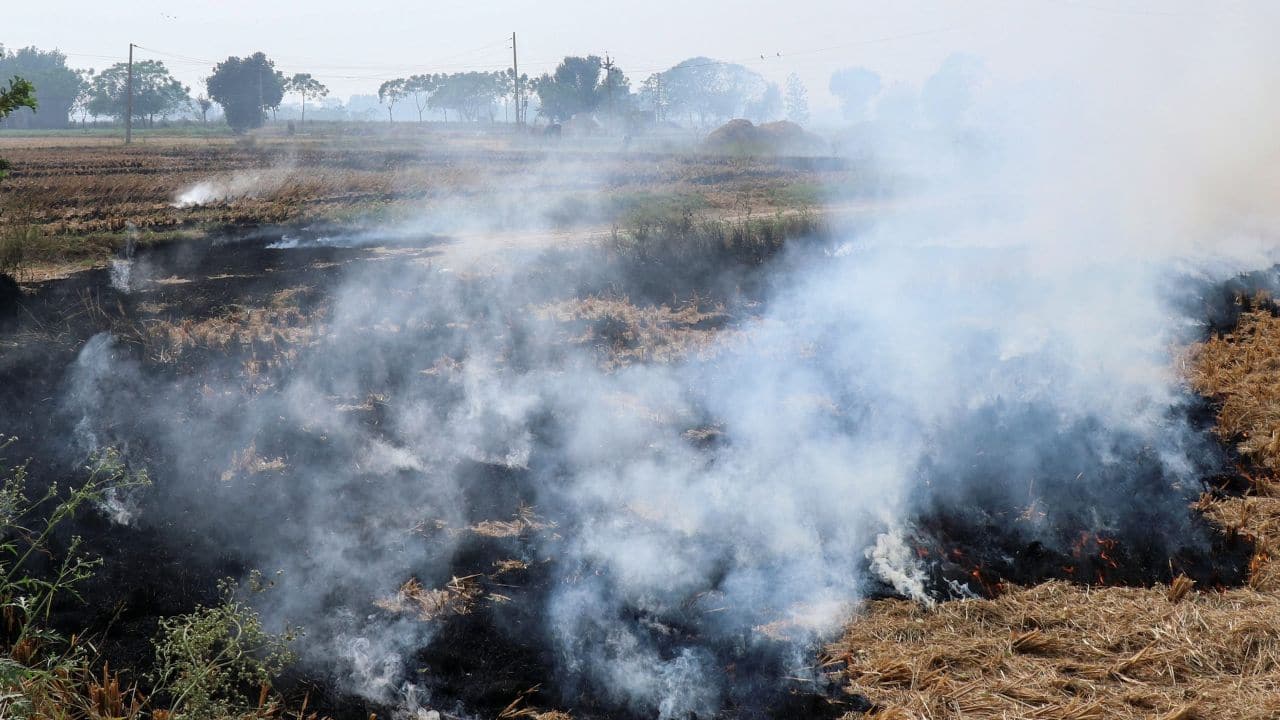 In August this year, the Supreme Court once again asked governments of Delhi, Punjab, Haryana and other states, about the stubble burning preventing preparedness. On September 22, the SC-appointed Environment Pollution (Prevention and Control) Authority (EPCA) wrote to the chief secretaries of Punjab and Haryana urging them to take measures to control stubble burning since evidence had started appearing.

“We recognise that we have lost time because of COVID-19, but given that the winter season is now fast approaching, we need to tackle this with urgency and ensure compliance,” wrote Bhure Lal, chairperson of EPCA, the panel tasked with keeping an eye on pollution and stubble burning in the region.

In their action plans to check stubble burning, Punjab and Haryana government informed EPCA about proposals of setting up more subsidised custom hiring centres (CHCs) to give the otherwise expensive farm machinery to farmers for crop residue management on a rental basis.

The Punjab government said it has been utilising crop residue through biomass-based power plants. Officials said while 7,378 CHCs were set up another 5,200 were bin process. The Haryana government said that a committee had been set up to look into the progress of bio-CNG and bio-ethanol projects to manage crop residue. The BJP-ruled state said that it had set up 2,879 CHCs while 2,000 more will be established by October.

Stubble burning is conspicuous in winters because it deteriorates the already-spiked pollution level in Delhi-NCR ahead of harvesting season that that runs through September and November. Though burning stubble, the leftover crop residue on the farmlands, is banned, yet, in absence of alternatives such as machines, the farmers indulge in this old practice to clear the fields for the next crop.

Officials have been in denial, so far, while promising a check on violations. They say that the satellites capture all fires, not just those due to crop fires. A man burns paddy waste stubble in a field on the outskirts of Chandigarh, India November 8, 2016. REUTERS/Ajay Verma

“Our teams are on the ground. It is too early to report farm fires. We believe this year farmers will be careful and will not burn the crop residue,” said an official of Punjab Pollution Control Board.

In Haryana too, officials said that they were hopeful that the instances of stubble burning would be less this year. The government’s agriculture department had colour coded areas in all districts on the basis of last year’s residue burning. As many as 332 villages fall in the red zone, another 675 fall in the yellow zone, they said.

“The government will provide financial aid to at least 11,000 plus farmers who have applied for agricultural implements under the crop residue management scheme -- ‘Promotion of Agricultural Mechanisation for In-Situ Management of Crop’,” said Haryana’s Additional Chief Secretary, agriculture, Sanjeev Kaushal adding that the state had approved a Rs 1,304 Crore budget for crop residue management, this year.

Farmers say that they do not have a choice but to burn the paddy straws as it saves them labour and equipment-hiring cost.

“Neither have we seen any machine in our village nor have we been given any money by the government to dispose of the paddy stubble. What do we do? We have no choice but to burn the residue. We will stop burning them once we are provided a machine by the government,” Harpal Singh, 45, a farmer from Mohali told news agency ANI.

Experts have warned that this year, the stubble burning can be even more deadlier because of the surge in COVID-19 cases in the region. While Punjab is about to cross one Lakh positive cases, Haryana has reported 1.18 lakh cases so far. Delhi, one of the worst affected states of the country, has 2.6 Lakh infections, so far.  More pollution in air would mean more instances of co-morbidities amid the pandemic.

“If alternate arrangements to stubble burning are not made, pollutants like particulate matters and toxic gases could give rise to severe respiratory problems, which will further worsen the COVID 19 situation,” Sanjeev Nagpal, also an advisor to the Union and the Punjab governments on the crop residue management, told PTI earlier this week.

“Crop stubble burning is the major source of winter pollution in Delhi. Governments need to listen and work hand-in-hand with scientists to address the issue of crop stubble burning,” said Kejriwal. Delhi is also rolling out a subsidy scheme for buying electric vehicles soon.

Punjab CM Captain Amarinder Singh has again sought funds from the Centre.“Though state government is launching an aggressive media campaign to educate farmers and people in general, giving the linkage with COVID-19, it was imperative for government of India to step in with Rs 100/quintal compensation state has been seeking for farmers to manage paddy straw,” read a statement issued by the Punjab government quoting Singh on September 23.

All these actions might be a case of too little, too late, it appears.