Why the American Dream still resonates with so many Indians

Some Indian parents who immigrate to the US believe that even if they don’t get the necessary opportunities to succeed, their children will benefit from the improved environment, the right “neighbourhood”, hone their skills and have a successful future.

"Life should be better and richer and fuller for everyone, with opportunity for each according to ability or achievement" regardless of social class or circumstances of birth.

The American Dream as defined by James Truslow Adams in 1931

P.V. Gopalan, a civil servant from a village near Chennai used a portion of his retirement savings to send his eldest daughter, Shyamala to the US for a masters program in UC Berkeley. All four of his children went on to have successful careers across the world, but Shyamala, especially stands apart as an epitome of the American Dream, not only because she went on to complete her PhD and contribute significantly to breast cancer research, but also because her daughter, Kamala Harris, assumed office as the Vice President of the United States on January 20, 2021.

The land of opportunities, as America is known to generations of Americans and others, was the place where anyone can become anything with hard work and ambition. The possibility of upward social mobility, defined as the ability to move up social stratas defying circumstances that a person is born in, was the beacon of light for millions of people who immigrated to the United States of America during the 20th century.

In the 20th century, Indians who had been struggling against barriers created by caste, religion, income, occupation etc. were also seduced by the American dream and the desire for a better quality of life. Interestingly, an economist who has been at the forefront of the discussion on whether America is indeed the land of opportunities, is an immigrant himself. Professor Raj Chetty, one of the youngest fully tenured faculty members in Harvard University used anonymised field level or administrative data to identify wealth and income changes in the lives of American families across generations (also known as intergenerational social mobility) and concluded that the American dream, to a certain extent, was being viewed through rose-tinted glasses.

Let it be the dream it used to be.

But opportunity is real, and life is free,

Equality is in the air we breathe.

(There's never been equality for me,

Nor freedom in this "homeland of the free.")

Langston Hughes, an African American poet wrote the above poem in 1938, portraying the hard lives of the working-class African Americans who were struggling against poverty and racial stereotypes. The poem which starts off by explaining the American dream, that life can be better for everyone, shifts to a bleak narrative about how social class and race impede one’s attainment of a better life. This poem suggests that social mobility has always been a problem in America, and for many who were born under poor circumstances, the American dream may very well be just that - a dream and nothing more. The recent protests in the U.S. such as the  Black lives matter movement, the rise in pandemic related violence against Asian Americans and the attack on the U.S. Capitol diminishes the vision of America as the land of opportunities and superior quality of life. If it really is the place where success is determined only by one’s achievements, then why are such atrocities still taking place. The deep rooted inequality in certain regions might be the answer to this conundrum. A look at the “Opportunity Atlas” created by Raj Chetty and his research team, shows that some areas in the U.S. (regions shaded in red in Figure 1) can look very similar to developing countries in terms of poor infrastructure and lack of opportunities. It is no coincidence that these were also the areas with the largest slave population in the 1800s (The Atlantic).

The American Dream without the rose-tinted glasses.

Raj Chetty’s research has identified that a child born in poor family conditions in the 1980s had the same chance of moving up the social ladder within the same birth cohort as a child had in the 1940s. This type of social mobility is called intragenerational mobility. However, the share of children who are earning more than their parents has declined from 90% to 50% over the past four decades (see Figure 2). In other words, intergenerational mobility seems to have worsened. As a result, it is highly likely that despite the technology wave that we have witnessed in the recent decades, generations today might not be enjoying the same purchasing power that their forefathers had once enjoyed. (We are, of course, not considering the benefits that technology has brought us). In order to truly realise the “American Dream”, Raj Chetty and his team emphasise the importance of distributing the benefits of economic growth across different income groups. As we discussed in a previous article “GDP”, higher economic growth does not necessarily have the trickle down effect that we expect it to automatically create. Higher economic growth can, therefore, worsen the cracks of inequality in a nation if not distributed properly.

Raj Chetty’s research focuses on the impact of government policy in improving the availability of the necessary opportunities for equality. In a federal program “Moving to Opportunity”, families were relocated to neighbourhoods with better schools and jobs. Early studies showed that there were no significant effects of social mobility but Raj Chetty and his team, after looking at fresh data in 2014, realised that while there were not many financial benefits for the adults, the children who had moved there had experienced significant financial growth on growing up compared to their counterparts who hadn’t moved. So while it may take a generation to reap the benefits of the program, it would be inaccurate to conclude that there were no social mobility benefits in relocating to better neighbourhoods.

Why do many still consider America the land of opportunities?

According to the World Economic Forum’s Global Social Mobility Index, Denmark and many Nordic economies top the charts, with the United States ranking 27th in the list. While the U.S. does not rank very highly on the list, the fact that China ranks 45th, Mexico ranks 58th and India ranks 76th, explains why the narrative of an American Dream, a land where everyone has a better chance of becoming rich or owning a house, continues to exist. Persistently low social mobility does not only hurt an individual but affects an entire economy as it hinders adequate allocation of resources in terms of human capital (manpower) which could have, otherwise, been the engines of economic growth. 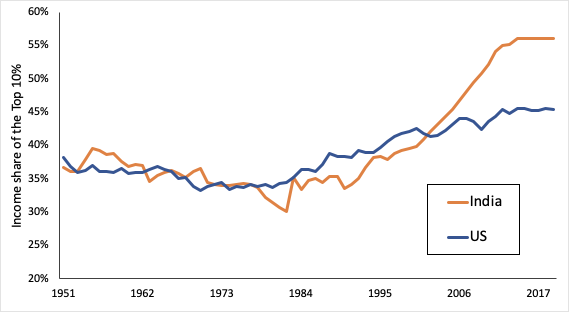 Everyone would like to receive the necessary education, training and access to infrastructure which can help them break free from the shackles of the socio-economic status to  which they  were born. Thus, the American dream thrives in the hearts of all those who seek this social mobility for themselves and their children and find it missing in their home countries. Given visa restrictions, some immigrants feel compelled to take illegal routes and accept low income paying jobs, hoping to receive the social protection that the U.S. federal government has promised its citizens. Moreover, in line with Raj Chetty’s research, some Indian parents who immigrate to the U.S believe that even if they don’t get the necessary opportunities to succeed, their children will benefit from the improved  environment, the right “neighbourhood”, hone their skills and have a successful future.

We are striving to forge our union with purpose.

To compose a country committed to all cultures,

then love becomes our legacy,

and change, our children’s birthright

For there is always light,

if only we’re brave enough to see it.

If only we’re brave enough to be it.

As Amanda Gorman’s poem, recited during President Biden’s inauguration on January 20, 2021, affirms, equal opportunities and increased social mobility are only possible if we consciously embrace change and strive for equality. In reality, hope for a better quality of life is not necessarily ‘The American dream’, but a ‘Dream for a better life’.