What to watch this weekend? Laugh in the face of a lockdown with The Death of Stalin

If you ever wondered how the impossible it is to use ‘funny’ and ‘totalitarianism’ in one sentence, you would need to see this film.

Tired of hearing ‘Hunker down’ on the news? Fed up of watching shows with subtitles because you do not wish to concentrate too much? Need a break from the intellectual pursuit of documentaries and have some fun? This is the week for it because I have discovered one of the funniest, fall off your chair, sputter coffee all over your shirt front movies. It is called ‘Death Of Stalin’. It's on Amazon Prime.

Dictators are no laughing matter and Joseph Vissarionovich Stalin was not just the successor of Lenin, but he forged everything that the Soviet Union was to be: He ruled with an iron hand (ruthlessly killing his opponents from enemy lists), his people suffered famine and food shortage and yet people believed great things would happen to them (thanks to his choosing to side with allies during WW2). When we learned about him in high school, I was fascinated by the fact that he joined a secret book club when he was in school, and when he was a young man he even had a gang that looted, and kidnapped kids from wealthy families for ransom. And Lenin was his mentor. Quite cool, that! Plus he was an editor of Pravda at one point before he joined politics!

The creators of the comic book The Death Of Stalin had to be quite mad to have dreamed up a scenario that may have happened because there are few facts available today about the dictator’s death. And even though the comic book dedication says that the situation itself must be rather insane, the movie adaptation of this comic book (Fabien Nury and Thierry Robin) by Armando Ianucci is nothing short of brilliant.

If you found the trailer demented, wait until you see the film! Steve Buscemi as Nikita Khrushchev rules. But first things first. As in the comic book, the film starts with Mozart’s Piano Concerto #23. The lovely Olga Kurylenko (you have seen her as a Bond Girl with Daniel Craig and in the film Oblivion with Tom Cruise) plays the pianist Maria Yudina. Chaos ensues when Stalin calls and makes an unusual request: he wants a recording of the concert that was played live from Radio Moscow.

Who can say no to the boss? Maria Yudina is bribed to play the piano again and the people are assembled to recreate the ‘live’ concert and a recording is sent to the dictator at his dacha.

What happens next is a heart attack and the ensuing chaos that follows. Heart attacks are not funny, but the cronies kneeling in the dictator’s piss and talking about how the suit is ruined (‘I had three fittings!) is altogether hilarious. Mozart’s piano concerto is no longer art, this film makes it forever funny. Lavrenti Beria was a scary Chief of Police in real life. To watch the fabulous theater actor Simon Russell Beale play the part with so much mean gusto is eye-poppingly fun (‘Arrest both of them, but kill the wife in front of him, then shoot him!’).

There’s Malenkov (Jeffrey Tambor) and Molotov (Michael Palin) and Stalin’s children, the soaked in Vodka Vassily and his demented daughter Svetlana… Should the doctor be called needs to be decided by a committee and the funeral too. The futile search for the little girl for the new portrait is a thread which has a parallel in our country as well. Remember how politicians vie for a photo opp to kiss the babies (Hollywood film The Campaign had a grab the baby episode that is still funny)? And the mention about corsets in this film reminded me of the fuss the PR machinery made about a leader’s broad chest during the elections!

If you ever wondered how the impossible it is to use ‘funny’ and ‘totalitarianism’ in one sentence, you would need to see this film. Imagine this film set in India, with one of the ‘beloved’ leaders. First the makers would be thrown into jail for sedition and two, no one would be laughing. That’s why this ‘historical’ film is extra hilarious.

What makes this film great is the irreplaceable, the one and only Steve Buscemi. Remember him in Con Air sitting down to have tea with the little girl? That dreaded role is imprinted in my head, even though he has voiced many characters in animation films. He’s delightful as Nikita Khrushchev in the film. Sounds illogical, right? But the scheming, the plotting, the ‘off with their heads’ moments are made even funnier because Steve Buscemi is able to plot the murder of Beria while he decides ‘ruched’ or ‘not ruched’ to curtains at Stalin’s funeral. 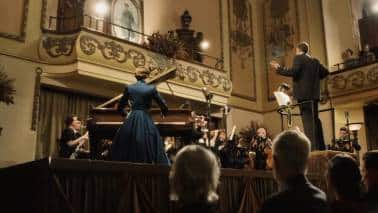 Does it get funnier? Yes. The film is like a little avalanche and it not only maintains the impossible speed at which horribly funny events happen, but they increase exponentially. Just when you think this plot to do one thing is going to backfire, things just become worse. And everything needs to happen with the consent of the committee, by a unanimous vote. I’ve seen many political satires from Dr. Strangelove to Wag The Dog, but this one brings Monty Pythonesque madness to dictatorship and does not look back. It’s a wickedly clever take on politics and just when heads of state everywhere are looking to hold on to their chairs because every one of them is mishandling the current pandemic badly, this film will serve as a reminder on how chaotic things must be in the backrooms of our State.

Not very often does one get to say that the film is funnier (or better) than the book, but this film is funnier than the graphic novel by the same name. Politics will always remain annoying and hilarious and jaw-droppingly unbelievable at the same time. I wish we were free to create such films to let our people know the secrets our ‘dear leaders’ holds. Some day, perhaps!