Venture debt firm Trifecta Capital plans to invest across 15-20 startups during the current year with the deal size ranging from Rs 5 to 45 crore according to a top executive of the company.

"We have made 18 investments in the last 15 months. Of the 18, we have committed about Rs 275 crore. We have already started to get returns. We would like to keep up the pace to at least 15-20 startups this year," Rahul Khanna, founder and managing director of Trifecta Capital told Moneycontrol.com.

Venture debt funds have gained importance in the last couple of years with most of the startups raising funds to usually meet specified operational targets unlike a venture capital or equity fund which is mostly raised to prepare a war chest and to meet long-term goals.

"People have started to appreciate the cost of debt versus equity," said Khanna.

These debts help a company to minimise dilution. As compared to a VC only funding round, the founders get to keep a higher share when they combine the round with a debt fund. 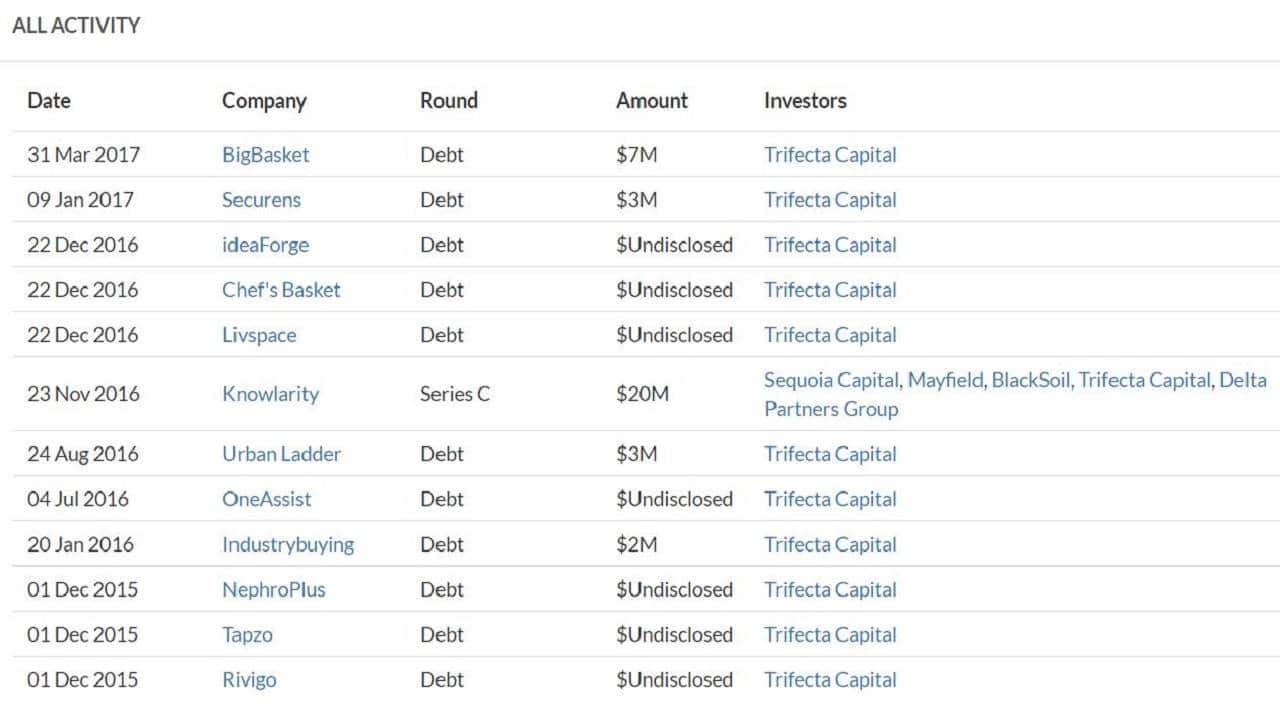 (Funding given by Trifecta | Source: Tracxn)

According to Trifecta, a lot of their investors have been able to double their allocations since venture debt is a high yield medium. Khanna, however, declined to share specific details.

The company has investments from banks, insurance firms and family offices.

Like many other funds, Trifecta too works on a cap based module.

"The caps have been constructed with a risk management standpoint ... we cannot deploy more than 10 percent of our committed capital, into any one company. We also have caps on who are the equity investors...so we can only have as much capital at risk with an equity investor. We also have sectoral caps," said Khanna who has funded startups across consumer internet, enterprise software and technology sectors among others.

Incidentally, the rise of venture debt has started to happen at a point when the growth of venture capital funding in the startup sector has declined.

In January 2017, barely USD 173 million worth of venture capital investments took place in Indian startups compared to over twice that number in the same period, a year ago. The reduced investments by VC funds makes it India an attractive market for venture debt firms.

Over 60 percent of startups surveyed by venture debt fund Innoven India in its latest India Startup Outlook Report 2017 said they had an unfavourable funding experience 2016, with half of them not being able to raise funds finally.

In the last one year, the startup sector has witnessed a lot of developments including layoffs at the country's third largest e-commerce firm Snapdeal, a massive decline in the funding scenario and hundreds of startups shutting shops citing funding pressure.

Unlike 2015 which saw investors pouring money across multiple startups, the last 15 months have been highly cautious.

"In a lot of ways what people were trying to look for was behaviour change which is the hardest change to make happen. Imagine ten years ago there was no Ola, Uber or Flipkart...many of these brands did not exist...you cannot imagine your daily life without them now... somebody had to subsidise their market creation," Khanna said justifying the move of VC firms who poured in millions of dollars in India.

"In a lot of ways this was done by investors...they subsidised the cost of market creation...we benefited a lot because we have a generation of consumers which are now digitally savvy. We have to make sure that we do not throw baby along with the bathwater...," he added.

Talking about the layoffs, Khanna said that people went through similar waves in Silicon Valley from 1999 to 2001.

"The truth is, when a company gets funded, they hire people in a hurry. In some cases companies end up paying them more than they should have paid," he said.

According to Khanna, there also has been a misalignment of incentives as people were paid a premium to join startups unlike many other parts of the world, where they take a pay cut because they think they will make more money through equity and ESOPs.

He said that hiring indiscriminately and paying more than market salaries created a huge fixed cost problem for startups. "What kills companies is the fixed cost...if you cannot manage that, that becomes a problem," he said.

Not prudent to go for forced waiver of interest, risking financial viability of banks: RBI to SC