Two years of Franklin Templeton debt fund crisis: Will it win investors back?

Having returned to investors nearly all the money stuck in the six debt funds it unceremoniously wound up two years ago, Franklin Templeton is looking to win back investors and distributors. It’s not going to be easy.

COVID-19 had been declared a pandemic in March. As the viral disease spread across the world, equity markets had fallen by 37 percent in 40 days and debt markets froze. Faced with massive redemptions and illiquid portfolios, Templeton decided it could not encash most securities in its debt portfolio.

Two years on, investors in the schemes have been returned most of their money. As of April 23, 2022, Franklin Templeton returned Rs 26,098 crore back to investors. The reason why investors got a bit more than the April 2020-end corpus was because the securities earned interest during the intervening period. And some securities were also sold at a gain, which provided capital gains to the portfolio.

Franklin Templeton is trying to get a new start now.

Also read: Franklin Templeton is here to stay in India, we are hiring and getting ready to launch new funds: Sanjay Sapre

In July, the fund house will get a new president, Avi Satwalekar, who previously was head of Franklin Templeton Malaysia.

Seeking a second chance
In a nearly three-hour conversation with Moneycontrol, Sanjay Sapre, the current President of Franklin Templeton Asset Management (India) Ltd, said the fund house is ready to move on and win back the trust of investors.

The question: Will investors and distributors give Franklin Templeton a second chance?

The main problem with the six debt funds the investment manager wound up was a basket of illiquid securities it found impossible to sell in the days leading up to their closure. 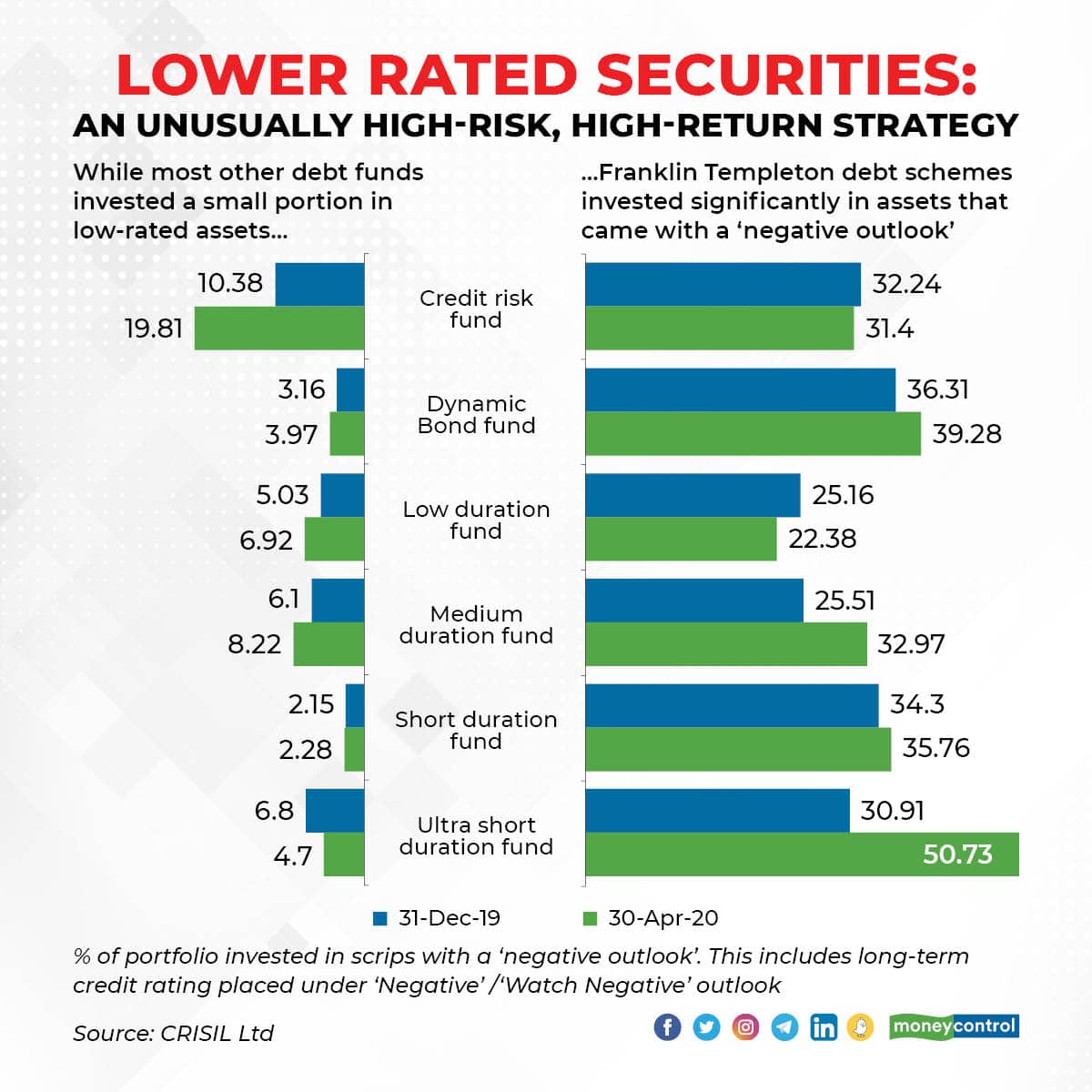 Although many debt funds took credit risks, Franklin Templeton ran a high-yield strategy across many schemes.

A legal battle that some of its investors launched against the fund house is still underway. SBI Funds Management, India’s largest mutual fund house, appointed by the Supreme Court as the official liquidator of the troubled Templeton funds, has sold most of the portfolios.

In the first fortnight of this month, SBI Funds Management sold securities issued by Clix Capital Services Pvt Ltd -- among the last remaining holdings in the schemes.

SBI Funds Management has one more lot of securities to sell before it moves out of the picture entirely.

In numbers: How has Franklin Templeton Mutual Fund repaid its investors?

These were issued by the Andhra Pradesh Capital Region Development Authority (APCRDA) to fund the development of Amaravati city as the state capital after Hyderabad went to Telangana, which was carved out as a separate state after the bifurcation of united Andhra Pradesh in 2014.

Segregated assets
That’s not all. Aside from the illiquid securities, investors’ monies have also been stuck in segregated assets. Nearly Rs 1,250 crore is still due to be paid by five schemes (FILDF, FISTIP, FIIOF, FICRF and FIDAF) that hold securities issued by telecom company Vodafone.

Nearly Rs 590 crore is also due to be paid by FTSTIP, FICRF and FIDAF that hold Yes Bank’s AT1 (Additional Tier 1) bonds.

The fund house has a made partial recovery from some of these groups.

Sapre told Moneycontrol that Franklin Templeton had also taken some of these entities to court to press for a speedy recovery.

Winning back investors’ confidence
The legal battle over whether Franklin Templeton crossed the line and took undue risks is still on. After the capital markets regulator, Securities and Exchange Board of India (SEBI), slapped hefty fines on the fund house and its senior officials and asked it to return the fund management fees it had earned in the months leading to the winding up, Franklin Templeton filed an appeal at the Securities Appellate Tribunal (SAT).

Also read: Explained: How SEBI arrived at all the penalties in the Franklin Templeton case

Winning investors back will be the tougher battle. To be sure, there are two schools of thought on the subject.

By giving much of its investors’ money back, Franklin Templeton has redeemed itself, said Nikhil Naik, chief growth officer at Naikwealth Planners Pvt Ltd, a Mumbai-based mutual funds distributor.

“They will be a good example of how money can come back to investors if they stay invested in mutual funds for the long run. Investors have lost money in so many company fixed deposits; Franklin Templeton has done justice to its fiduciary responsibility of paying the last rupee back to their investors,” said Naik.

Refunding their money is not enough to placate investors, other distributors say.

"Trust is extremely important, especially when it comes to investing. Losing access to their investments was the last thing that investors wanted to see after the COVID-19 outbreak. FT MF may have had its own logic for taking the wind-up decision, but they lost empathy of the investors," said a distributor, requesting anonymity.

Although the fund house kept investors apprised of the recovery process through regular communications, the distributor added that it may be a case of too little, too late, for some investors.

Many distributors are also upset with Franklin Templeton because the fund house did not give commissions to them for the period after the winding up. Although this matter is presently in the court and the Supreme Court will take a final decision, distributors say the fund house ought to pay from its own pockets. "After returning investors' money, if you are not going to return distributor commission for those two years where we have faced customers' wrath (on account of the sudden winding-up), and we have hand-held them, it's bad. We used to get the calls from our investors,"says Pune-based distributor Amit Bivalkar, director at Sapient Wealth.

Road ahead
Many distributors see a long and tough road ahead for Franklin Templeton in its attempt to win back investors.

The six wound-up debt schemes of Franklin Templeton were the most popular in its stable, noted Deepak Chhabria, CEO and director of Axiom Financial Services.

There are “enough and more alternatives elsewhere in the industry” to the other high credit-quality schemes that Franklin Templeton still runs, Chhabria said.
Sapre says that Franklin Templeton “wouldn’t even think of launching debt schemes till the legal cases are settled” although SAT has stayed a SEBI order barring the fund house from doing so.

That leaves its equity and hybrid schemes, the focus of Templeton in the days ahead, Sapre said. Here too, it’s a not going to be easy as inflows into its equity funds also slowed because of the fiasco with debt funds <see graphic: Side Effect> 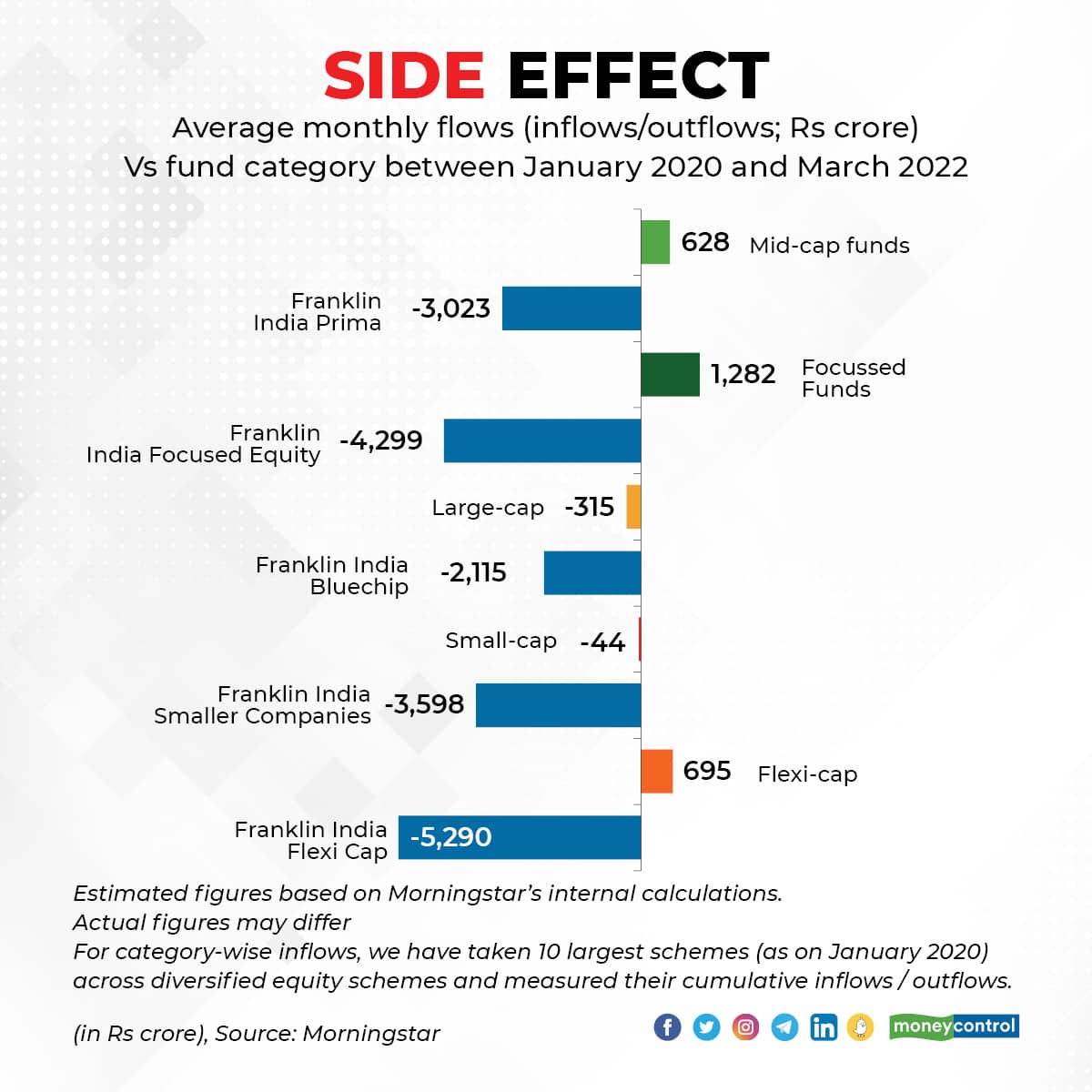 Franklin Templeton's debt fund crisis had some investors exiting from its equity funds as well. But the tide seems to be turning

Franklin Templeton has plans to launch new hybrid and equity schemes, which may be thematic or passively managed index funds.

As of March 2022, Franklin Templeton India was the country’s 15th largest fund house, nowhere close to the top five.

Turnaround not at the press of a switchSapre professes not to be worried, but is aware that it faces a long, uphill trek.

“We understand that just because we have returned much of investors’ money in the six wound-up schemes, things are not going to turn around for us at the press of a switch,” Sapre said.

But will the fund house’s international parent be patient enough? “We are impatient, but we won’t lose patience. Franklin Templeton entered India in 1995, but we are still here,” Sapre said.

The road ahead for Franklin Templeton may be difficult, but not impossible to traverse.

Look at Mirae India Asset Mutual Fund. In 2008, soon after the implosion of Lehman Brothers Holdings Ltd triggered the global financial crisis , Mirae’s debt schemes in India turned to losses because the debt market froze up.

Mirae built back investors’ trust thanks to a superlative performance by its equity schemes and it is the 11th largest fund house today in India.

Jash Kriplani is a journalist with over ten years of experience. Based in Mumbai. Covering mutual funds, personal finance. His last stint was with Business Standard, where he covered mutual funds and other developments in the financial markets
Tags: #debt funds #Franklin Templeton #invest #investment #personal finance #Santosh Kamath
first published: Apr 25, 2022 07:20 am