The NCD wave: Surf for high-return bets, but stay anchored to quality offers

Experts advise investing only in select names, given the elevated risks relating to the deteriorating credit environment and tight liquidity scenario being faced by NBFCs.

Non-banking finance companies (NBFCs) seem to be on a fund raising spree, with as many as six of them currently coming out with non-convertible debenture (NCD) offers. NCDs are debentures that offer specific coupon rates for various tenures, and cannot be converted to equity shares. These instruments are listed and traded on the main stock exchanges, but liquidity is usually modest.

The coupon rates on offer are quite attractive, ranging anywhere from 8.45 per cent to 10.2 per cent across tenures, thus easily beating bank deposit rates. But taking the plunge and investing in these NCDs must be done after pouring over all the details and understanding the risks. Experts advise investing only in select names, given the elevated risks relating to the deteriorating credit environment and tight liquidity scenario being faced by NBFCs. 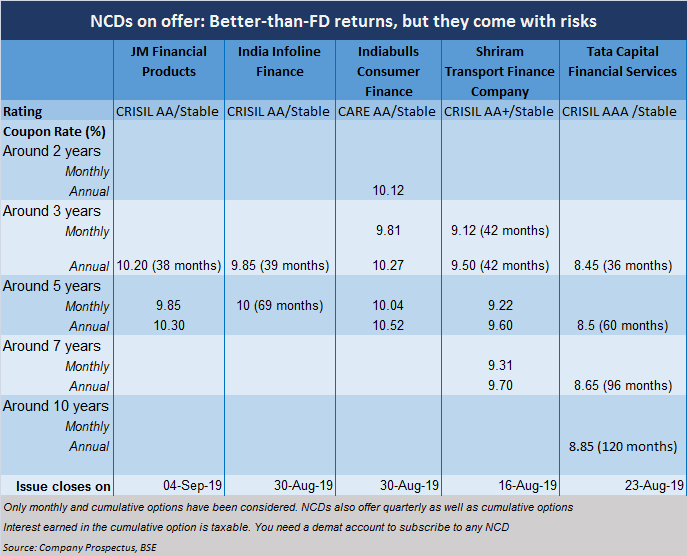 Most of these NCDs are being issued by firms in the  consumer lending business and face many challenges amidst a slowing economy, possibly resulting in a spectre of job losses.

The GDP (gross domestic product) growth has been slowing and the RBI, as noted in its August 7 statement, expects only a 6.9 per cent increase this fiscal, down from 7 per cent earlier.

There is a structural slowdown in sectors such as telecom, aviation, automobile and auto-ancillary. There have been large-scale losses in jobs in these segments. Thus there would arise concerns surrounding the ability of consumers in repaying debt.

“If the slowdown becomes broad-based and we see more job losses in the economy, then the consumer lending companies are more likely to suffer as some of their existing loans will go bad and there future growth will be hampered,” says a fund manager who wish not to be quoted.  NBFCs in the consumer lending business will find it difficult to service their bond holders in such circumstances.

Also, credit quality, as measured by CARE Ratings’ modified credit ratio (MCR), declined to a six-year low of 0.8 in the first quarter in the financial year 2019-20. The ratio in the corresponding period of financial year ended March 31 2019 was 1.02.

TCFS comes with the best credit rating of ‘AAA’ among firms currently offering NCDs. Predictably, the yield or the coupon rate it offers is the lowest among the lot <see table>. Be that as it may, a high rating can be a source of comfort for investors in the current turbulent times.

“Given the credit rating and the goodwill associated with the Tata name, it makes sense to invest in the TCFS NCD, especially for conservative investors,” says Joydeep Sen, founder of Mumbai based wiseinvestor.in.

“TCFS is the only company among the ongoing offers that have AAA rating. Given the exposure to consumer lending, it makes sense to stick to those with the highest level of rating,” says Vishal Dhawan, founder of Mumbai based wealth management firm – Plan Ahead Wealth advisors. However, he advises investing in NCDs issued by the company up to a five-year time frame. The 10-year NCD is not secured, he points out quickly. Secured bond holders stand ahead of unsecured bond holders to receive their claims, in case of liquidation of the company.

For investors with an appetite for risks in pursuit of better return, AA-rated papers may also be worth parking their funds in. Joydeep Sen recommends investing in AA rated papers if the investor is comfortable with the issuer. He expects that the situation will improve over a period of time and that the current yields are attractive enough to commit funds for such investments. Vikram Dalal, founder of Mumbai based Synergee Capital Services says, “Investors can consider the NCDs issued by JMFP and STFC in addition to that of TCFS.”

Of course, investors must not go too much down the rating curve in search of higher returns. NCDs with low BBB ratings such as those offered by Muthoottu Mini Financiers should be avoided by investors not keen on taking any risk in their portfolio. Experts also advise investing in short-term NCDs that mature in less than five years, given the current economic uncertainty. The 10-year option of TCFS and 69 months tenure of India Infoline Finance are unsecured.

But with interest rates in the economy falling in the past nine odd months, Vikram says that a better strategy is to look at some of the existing listed NCDs as well.   The yields are at least 100 to 150 basis points higher in the secondary market. A hundred basis points make a percentage point. A case in point is TCFS’ NCD with 8.8 per cent interest maturing in September 2021, which trades at 9.28 per cent on the BSE.

This rate is better than TCFS’ fresh issue that opens on August 13; the fresh three-year NCD will offer 8.45 per cent interest to investors. However, it is worth mentioning that the volumes on the stock exchange are very low and one might have to wait for a good deal to buy, and then most probably hold till maturity (2021, in TCFS’ case).

“Applying for an NCD in the public issue ensures that you will get allotment even if you apply for a small amount such as Rs 10,000 or Rs 20,000 subject to the terms of the issue. However, you have to be prepared to hold it till maturity given the low liquidity on the stock exchanges,” adds Joydeep.

Investors locking into NCDs must be aware of the credit risk. It makes sense to diversify. But instead of picking multiple NCDs, it’s better to stick to quality debt funds, especially if you are open to taking a bit of credit risk. “Given the small amounts at the disposal at the individual investor’s level, it makes sense to invest through a mutual fund if one is keen on investing in AA-rated bonds and lower. A mutual fund scheme can offer meaningful diversification to retail investors even with small investments,” Vishal added.