MC Explains: Why are NAVs of direct and regular plans of mutual funds different?

Regular plans of mutual funds are offered by distributors. These plans come embedded with distributor commission that brings down the NAVs by a bit. A direct plan is meant for those who wish to go directly to a mutual fund or through a fee-based investment advisor.

If you invest in mutual funds, then I am sure that you are already aware of the difference between Direct and the Regular plans. The NAVs of both are different.

Direct plans were launched by all asset management companies (AMCs) in 2013 (after the Securities and Exchange Board of India (SEBI) mandated it) for all their mutual fund schemes. The idea was that if an investor is able to invest on his own, then he/she should be able to do it ‘direct’ly and independently, without going through distributors/MF agents and avoid paying commissions unnecessarily. And since no commissions are paid in direct plans as they are offered to investors directly by the AMCs, these have lower expenses and higher NAVs.

So, while the Direct NAVs are and will always be higher than regular NAVs, not many understand how this impacts the future wealth that you can accumulate.

Let me take a very simple example to illustrate this fact.

I am choosing one popular largecap fund (ICICI Bluechip Fund) to show how a small but growing difference in NAV can result in a large difference in final value of your investments.

Note – The fund chosen is for illustration and should not be considered as investment advice or recommendation.

The direct plans came into existing on 1st January 2013, i.e., around nine years ago. On that day, the NAV of both regular and direct plans were same. But from thereon, due to lower expenses, direct NAV kept on growing at a faster rate, and thereby gave higher comparative returns to investors.

Notice how the NAV of the direct plan goes up faster than that of the regular plan. On January 1, 2013, both plans’ NAVs started at the prevailing NAV: Rs 18.55. 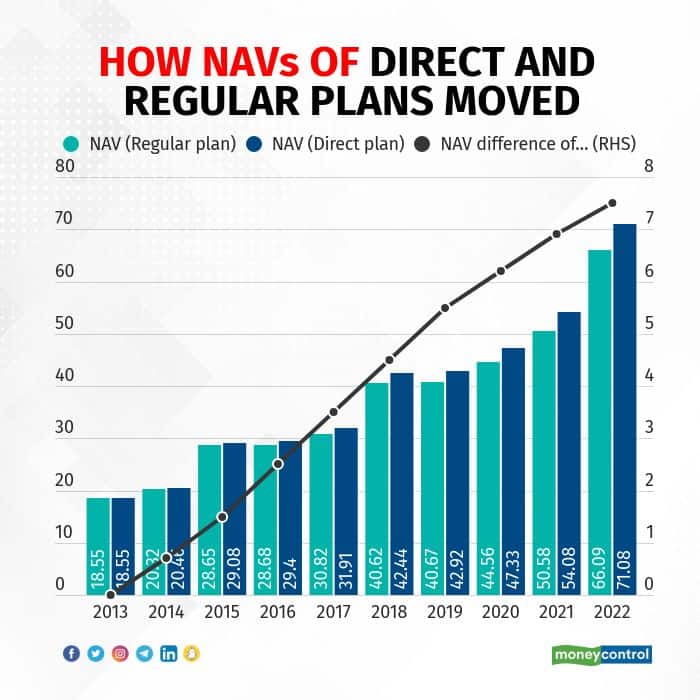 Let’s say you started a Rs 25,000 SIP (on the 1st day of each month) in both regular and direct plans from the start. How would your portfolio value differ then?

The difference is almost Rs 3 lakh or about 5 percent. This is after 9 years. For many of your long-term goals like retirement etc., your investment period would be closer to 25-30 years if you start investing early.

The difference in longer periods will only grow and result in lower wealth creation if you go for regular plans.

The expense ratio for the regular scheme as of now is about 1.69 percent while that of direct plan is 1.05 percent. This is still not a very large difference in expense ratio of the two schemes. There are several other schemes where the difference in direct vs regular expense ratio is higher. In fact, the higher the AUM of the funds, generally lower is the difference. So, you can just imagine the starker difference in final portfolio value in such cases where you have few funds with smaller AUMs in your portfolio.

Regular vs Direct plan: Which is better?

If you are still investing in regular plans, then do consider how much you are losing to commissions every year. By some broad estimates, more than 1 percent commission is paid to intermediaries for regular plans. So, you are missing out on that in terms of investment returns.

If someone is a Do-It-Yourself (DIY) investor or is advised by a fee-only investment advisor (who provides conflict-free investment advice and isn’t getting any commissions from AMCs), then direct plans are better suited for such a person. For others who need just basic handholding or execution services (someone who does basic risk-profiling, filling forms and submitting them to fund houses), regular plans are better.

If you are heavily invested in regular plans and now are uncomfortable with the high commissions being paid to your distributor, then talk to a fee-only investment advisor who will advise you how to gradually shift to direct plans in a tax-efficient manner. Of course, the fee-based advisor will charge you fees.

And just to give you an idea about the difference in expense ratio of direct and regular plans for few of the large active funds (with AUM above Rs 10,000 crore), here is a list to look at and ponder over: 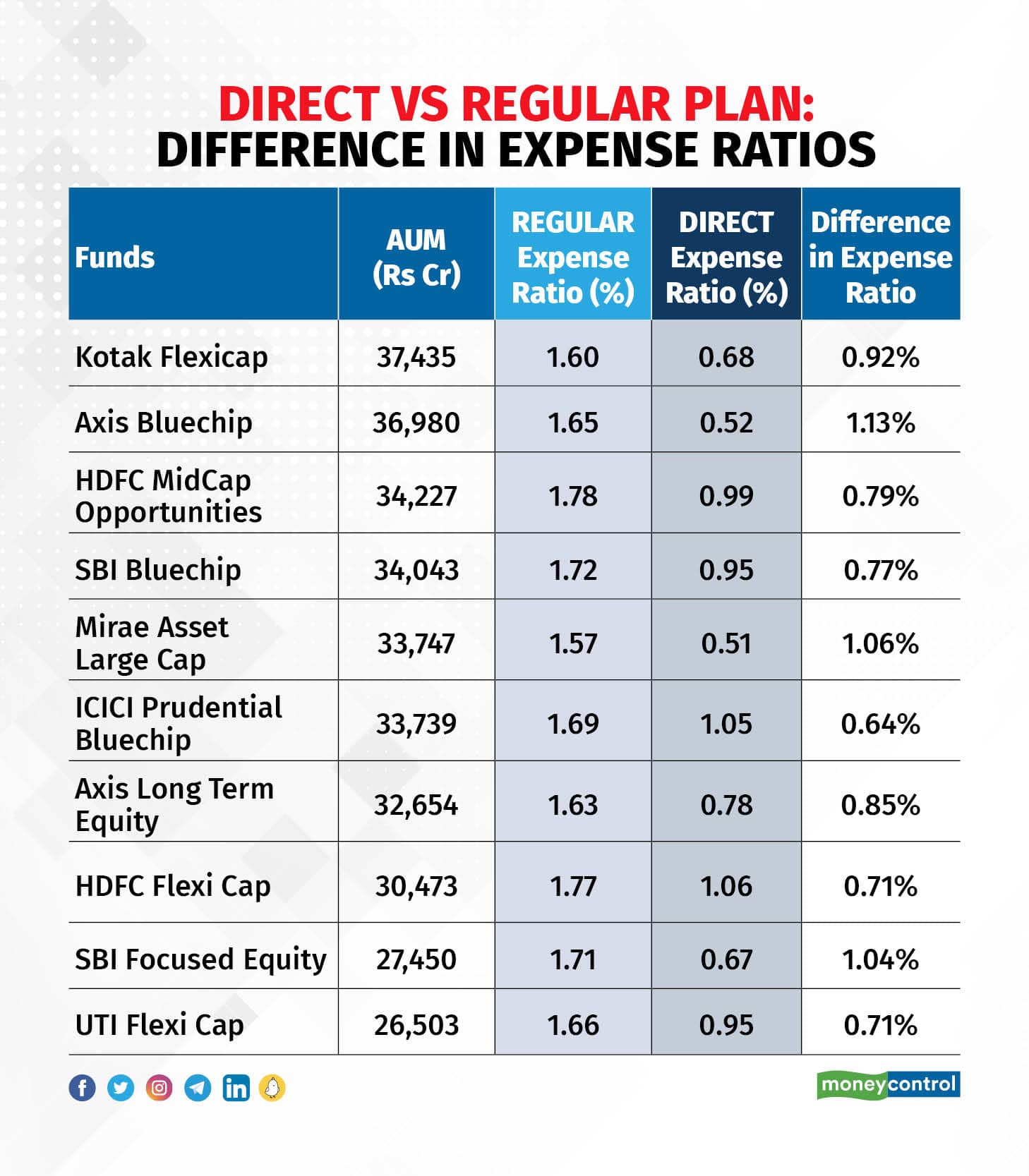