Many of the largest equity schemes at HDFC MF have followed a value investment style that went through a rough patch in the past five-odd years. But a broader market recovery has helped turn thing around in the last one year.

Prashant Jain, chief investment officer of HDFC Mutual Fund, is smiling once again. After years of not-so-great performances, all the three schemes that he manages have climbed to the top of the charts in recent times. HDFC Balanced Advantage Fund (HBAF) is in the top quintile of its category over the past one, three and five-year periods. HDFC Flexi Cap Fund (formerly, HDFC Equity Fund; HFF) is in the first quintile over the past one year, while HDFC Top 100 (HT100) is in the second quintile.

The three schemes, are some of the largest funds in the Rs 35 trillion industry, with a collective size of Rs 87,195 crore. Each of these is at least 24 years old. These schemes were star performers at one point in time. But Jain’s investment philosophy took a beating over the past seven years, partly due to market conditions and partly due to the rising competition from nimble-footed competition, especially from small and mid-sized fund houses. 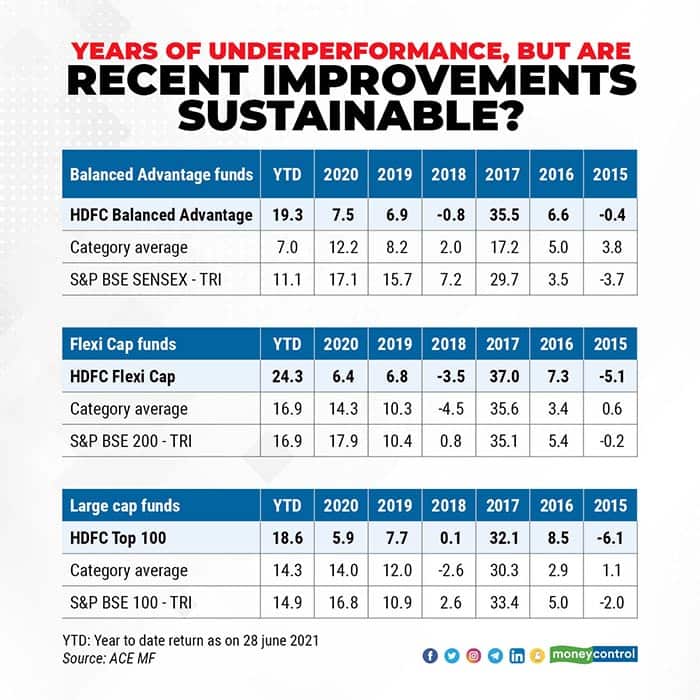 Is Jain’s comeback a flash in the pan or is the recovery for real?

Jain takes the value style fund management approach. He picks stocks that are undervalued and chooses the sectors that benefit when the economy does well. All his schemes’ portfolios hold large quantities of stocks from sectors such as banking, power, petroleum products, construction projects and minerals /mining. Even among banks, Jain likes state-owned and corporate banks such as ICICI Bank. His portfolios were ready to benefit from an economic recovery, but that didn’t happen. As a result, his strategy took a beating. But Jain appears unfazed. “Corporate-focused banks are likely to see strong improvement in profitability as the corporate NPA cycle is behind us. A pick-up in credit growth is likely to happen due to enhanced working capital requirement,” he says.

“Sometimes, even though these are excellent companies, the business cycle or profitability is much below normal. The banking sector was passing through this phase wherein there were temporary challenges because banks were recognizing their non-performing assets (NPA). We bought banks that would come out of this cycle stronger, but the NPA recognition process took longer than expected. Then, COVID-19 struck, and the recovery took longer,” says Jain. To his credit, he stayed away from weaker banks and finance firms. Instead, he held stocks of Power Finance Corporation, REC and Indian Railways Finance Corporation in the finance sector. Jain says that these state-owned finance firms have among the best chances of raising money, which is what they need, due to their government-backing.

Jain has also consistently held public sector companies from the power and finance spaces. That’s another reason why his funds didn’t do as well as the competition. He says that the disinvestment program through exchange-traded funds, at a discount, kept their share prices low. But a message from the department of investment and public asset management secretary earlier helped matters.

The statement on why the ETF route as a disinvestment route may be on a decline, has brought cheer to fund managers such as Jain, given his conviction on such stocks. “The shift away from ETFs to strategic divestment, improvement in profitability of core sectors, end of the corporate asset quality cycle, rise in the prices of energy and so on, globally, and attractive valuations support a positive outlook for these sector,” adds Jain.

A steady portfolio with little churn

One of the biggest criticisms of Jain was that he persistently held on to his philosophy despite the economy being on a weak wicket. Between the years 2015 and 2019, value funds underperformed the markets considerably. As per Value Research, except in 2017 when value funds gave an average of 40 percent return, the returns have been in single digits during all other years. Between 2011 and 2020, HFF and HT100 were in the bottom quintile of their categories in five out of 10 years.

“Jain’s processes are well-articulated. He likes counter cyclical stocks. These stocks went through a tough phase in 2018-19 and the first half of 2020. But he has seen these market cycles going against him in the past,” says Kaustubh Belapurkar, director, fund research, Morningstar Investment Adviser India. In these years, only a few stocks lifted the equity markets – mainly consumption-based companies. But as COVID-19 struck in March 2020 and consumer spending went down, these companies’ share prices also grew at a much slower pace.

Later, as the economy showed signs of reviving, two of Jain’s top holdings, SBI and ICICI Bank, followed suit. SBI’s share price rose 136 percent between September 2020 and now. ICICI Bank’s share increased 88 percent between July 2020 and the present. “Interest rates are at the lowest now in India. That has nudged people to borrow. During an economic recovery, bank stocks are usually the first ones to go up because corporates and individuals do their first leg of transactions through banks,” says Ravi Kumar TV, founder of Gaining Ground Investment Services.

Should you invest in the equity schemes?

Kunal Valia, Advisor, Waterfield Advisors says that the mutual fund industry is divided into two kinds of fund managers. “One set goes for high-quality, high-growth companies and the other invests by the value style – they buy companies that look down and out today but have future potential,” he says. But for value investors, he adds, the returns can come after a long time and are cyclical. “If the economy doesn’t do well and if equity markets don’t do well broadly, then value funds won’t do well,” he adds.

Do investors have patience? “Investors have to be patient in value styled funds, sometimes for 5-6 years. Unfortunately, people don’t have patience. But the beauty here is that if you wait patiently, you can get recover all your gains in just one year,” says Vinayak Savanur, Founder and CIO at Sukhanidhi Investment Advisors. Take HBAF, for instance. In 2018, 2019 and 2020, its returns were in the bottom quintile. The scheme made up its lost ground in just the first six months of 2021, with a 19.3 percent return, as against the category average of 7 percent and S&P BSE Sensex’s 11 percent.

Ravi Kumar TV says that rather than choosing schemes on the basis of large, small and mid-caps, it’s better to pick funds based on value and growth styled philosophies. That might make sense, as typically one set of schemes do better than the other in any market condition.

Kayezad E Adajania heads the personal finance bureau at Moneycontrol. He has been covering mutual funds and personal finance for the past two decades, having worked in Mint and Outlook Money magazine. Kayezad was the founding member of Mint’s personal finance team when it was set up in 2009.
Tags: #HDFC Mutual Fund #invest #Mutual Funds
first published: Jul 5, 2021 08:46 am