Venky's enjoys market leadership in the sector and controls majority of the supply in its key operating markets.

Poultry producer Venky's posted a stable Q1FY19 with double-digit growth in the topline and operating profits. A significant reduction in interest expenses also bumped up the bottomline. Venky's, which has been in the poultry business for over four decades, looks set to ride on the consumption wave and achieve a topline of Rs 3,000 crore during this fiscal year.

FY18 turned out to be a phenomenal year for Venky's in terms of financial performance as the company reported a 40 percent jump in operating profits. This was driven by better realisations for poultry and poultry products, richer product mix and higher capacity utilisation. 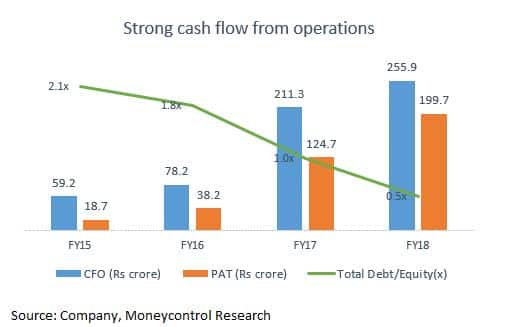 Strong presence across the northern and central region As a part of its expansion strategy, the company is setting up a new solvent extraction plant, vegetable oil refinery and SPF eggs plant in Maharashtra. The expansion entails a capital expenditure of around Rs 110 crores, which will be funded through a combination of long-term loans and internal accruals. These plants are expected to start commercial production over the next 3-6 months.

Soybean meal is the most important protein source used to feed farm animals. Soybean prices peaked in FY17 and softened over the course of FY18 resulting in a positive impact on the profitability of poultry producers. The current soybean prices are moderately higher than last year and will have a marginal impact on the profits of poultry producer Venky's.

Broiler  prices generally peak around April to June as the demand weakens during the summer season. Broiler prices, which were hovering around Rs 80-85 in April & May, have witnessed a seasonal correction of around 30 percent and are currently priced around Rs 60-62 per kg in September. Despite the recent correction, the prices remain comparable (2-5 percent change) on a yearly basis and are expected to firm up with the onset of the festive season.

Indian poultry market is growing at a healthy pace

The domestic poultry industry mainly consists of broiler meat and table egg. The industry has grown at a rapid pace over the last decade and the Indian market is now the fourth largest in terms of volume. Despite the large size, per capita consumption of poultry meat in India is one of the lowest in the world and has immense potential to grow due to changing consumer preferences.

Influenced by religion and other factors, India has largely been dominated by vegetarians. However, this scenario is fast changing, with the young Indian population abandoning vegetarian diet due to changing lifestyle. 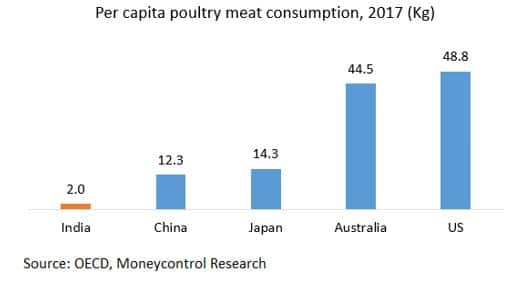 ICRA’s report on the domestic poultry market indicates India is a predominantly live bird market. Indian consumers have a strong preference for fresh broilers and therefore, around 90 percent of broiler sales happen at traditional retail outlets. In contrast, Chinese and South East Asian consumers prefer processed chicken. Backed by favourable socio-economic factors, the domestic poultry industry is expected to grow at a steady pace over medium to long-term.

Given the commoditised nature of Venky's business, the realizations are guided by demand-supply dynamics of the poultry market. Any poultry-related disease outbreak (bird flu etc.) could have a significant on the volumes as well as prices.  Besides, the margins also are dependent on the key input costs - Soyabeen and Maize. The prices of these commodities are dependent on agricultural and climatic conditions as well as international market.

The Food safety and standards authority of India has launched a hygienic and cleanliness drive to improve the health and safe measures of the meat processing units. Also, there is an increased focus on using medically important antibiotics (for farm and meat animals) as the distributors as well as consumers are laying emphasis on health and hygiene. The company needs to remain compliant with the changing industry requirements and environmental norms to ensure the smooth running of the business.

Venky's is an excellent play on India’s demographic & consumption growth story. The company enjoys a market leadership position in the sector and controls a majority of the supply in its key operating markets. The increasing popularity of Quick Service Restaurants - McDonald's, Pizza Hut and KFC will further propel the volumes growth of Venky's product offerings.

The management expects volume growth of 10-12 percent in the current fiscal with higher profitability as an increase in key input prices will be offset through improvement in capacity utilisation and reduction in debt. The stock price has been volatile in recent months and corrected over 40 percent from the 52-week highs. At the current market price, it trades at a reasonable valuation of 14 times FY19 earnings. Long-term investors interested in steady earnings growth (20 percent +) can look to accumulate this stock on dips as there exists a significant scope for multiple re-rating in the future.
Sachin Pal
Tags: #Companies #earnings #moneycontrol analysis #Moneycontrol Research #Recommendations #Result Analysis #Venkys
first published: Sep 26, 2018 02:44 pm