Part-2: How price-to-book value as a valuation tool could turn into a trap

In this part of the article, about dangers of using price-to-book value as a valuation tool, we dwell on the remaining three important cases where investors have to be careful.

In the second part of the article (click here for the first part) about dangers of using price-to-book value as a valuation tool, we dwell on the remaining three important cases where investors have to be careful. These include:
- When there is a big risk of a company incurring losses
- When there is a huge risk of equity dilution

- When too much debt can destroy equity

Case 5: When companies are going to incur losses in coming years

Punjab National Bank had a net worth of about Rs 43,000 crore in FY17. When it was hit by the alleged Nirav Modi scam, its shares tumbled to a low of about Rs 60 a share from around Rs 160 a share, much below its reported book value of Rs 186 a share in FY17.

A section of the market was expecting that the fraud could lead to future losses, impacting its book value. By the end of Q4 FY18, the bank surprised the market with a huge quarterly loss of Rs 13,400 crore. Even in Q1 FY19, it posted a loss of Rs 940 crore, with net non-performing assets of 10.58 percent. Investors, who were not able to factor in these losses early, have suffered. The bank’s reported book value has fallen drastically to Rs 140 per share. And if consensus estimates are to be believed, at the end of the current fiscal, the bank’s book value should settle at about Rs 100-110 a share. 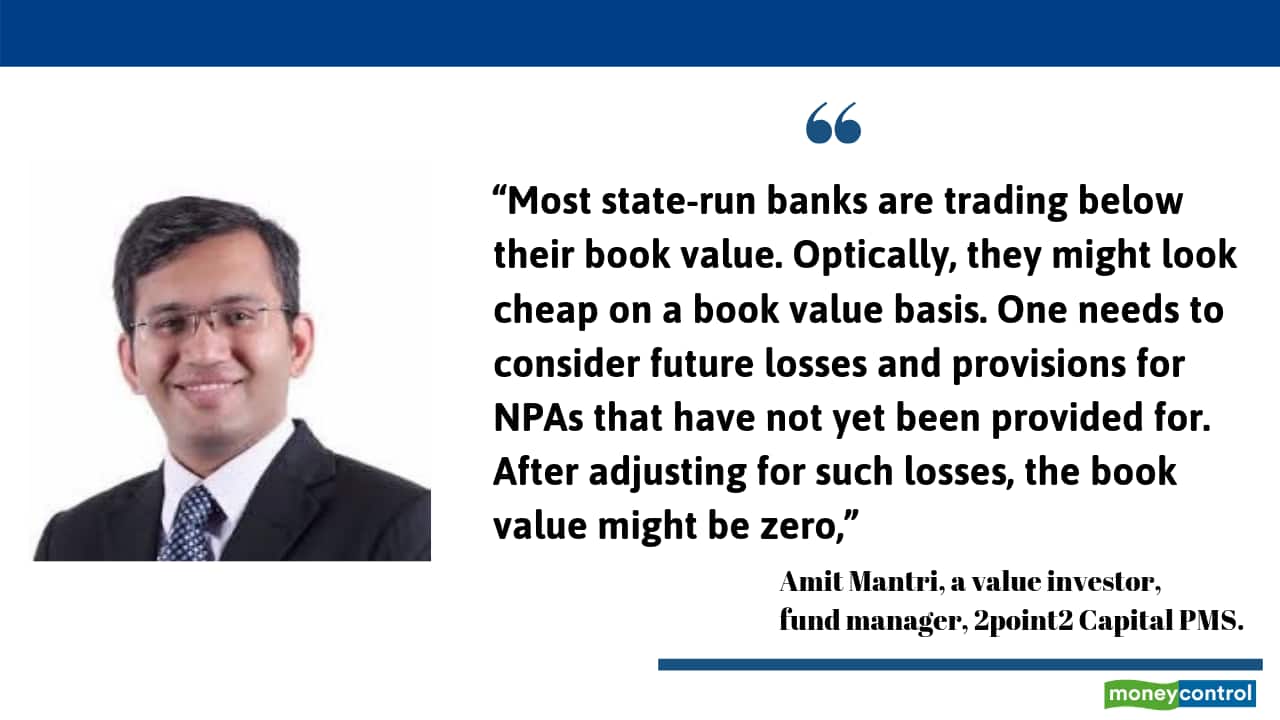 However, PNB is not alone. Quite a few public sector banks are going through a difficult period. “Most state-run banks are trading below their book value. Optically, they might look cheap on a book value basis. One needs to consider future losses and provisions for NPAs that have not yet been provided for. After adjusting for such losses, the book value might be zero,” says Amit Mantri, value investor and Fund Manager with 2point2 Capital PMS.

Case 6: There is a huge risk of dilution
If there are 100 outstanding shares in a company and assuming the company issues another 50 shares, ownership of existing shareholders will get diluted by 50 percent and book value will reduce to that extent, if the dilution is not accompanied by higher earnings. Indian promoters, who consider equity as cheap, are well known for this trick.

“When it comes to dilution, it is important to distinguish between situations where the issuer is opportunistic, which happens when the stock is selling at rich valuations and situations where one is issuing shares out of desperation to raise money to pay off debt, which can’t be done from operating cash flows. The first type of dilution can be beneficial for existing shareholders, while the second type can be harmful. If you look at the true wealth creators in the world outside the world of financial services, there is very little, if any, dilution. Most of the companies, which have created wealth, had no dilution in their stated history,” says Sanjay Bakshi, Professor at MDI Gurgaon.

In 2011, Sintex Industries used to trade at two times its book value of Rs 88 per share. Its equity capital jumped from Rs 27.11 crore in FY11 to Rs 31.12 crore in FY14 and to Rs 54.47 crore in FY17 as a result of issuance of fresh shares. If companies keep on issuing fresh shares, the denominator (number of shares) will keep on increasing, thus making reliance on book value misleading.

A similar fear is also seen in the case of PSU bank recapitalisation. Over the last three years, Corporation Bank has seen capital infusion of close to Rs 4,500 crore and its paid-up equity in this period has doubled from Rs 167 crore to Rs 333 crore in FY18. This dilution has resulted in erosion in its book value from Rs 125 a share to Rs 61.5 a share in FY18.

What’s interesting is that the government is now looking for a further capital infusion of about Rs 9,000 crore, which at the current market price would require an additional 300 crore shares to be issued, or 120 percent of its current outstanding shares. The market seem to be already factoring this in, as the stock is currently trading at 0.5 times its FY18 book value.

Case 7: Too much debt can erode the value of equity in no timeDebt in general is risky. In good times, leverage can lead to faster wealth creation and boost profitability and earnings of the company, but in bad times, too much debt can come back to bite even stronger companies, impairing their equity capital. “Leverage can be very dangerous. Say the stated value of assets is Rs 100, which is funded by equity of Rs 10 and liability of Rs 90. Even a small mistake can wipe out the entire equity," Bakshi said.

Take the case of companies in the steel sector such as Bhushan Steel, Electrosteel Steels and Monnet Ispat, which have been auctioned under the insolvency process, but the existing shareholders have received nothing. Because of mounting debt and lack of profits, interest cost was silently destroying their equity. In many cases, the realisable value of these assets was not even enough to pay back loans and banks took a big haircut on their exposure. In such leveraged cases, the stated book value turns into a trap.

Note: This article was originally published on April 5, 2019, for our premium subscribers. After this, the stock prices have changed and thus the valuation data mentioned in the article are only for the information purpose and needs to be adjusted in the current context.