Microfinance institutions (MFIs) have truly come of age. The segment emerged relatively unscathed by the liquidity crisis that engulfed the non-banking finance companies (NBFCs) since September 2018. That doesn’t come as a surprise as MFIs are well placed on liquidity front as compared to other segments of the non-bank finance sector. One, unlike many other NBFCs, average asset maturity tenure is generally lower than the average liability maturity tenure for MFIs. Two, most MFIs rely on banks for their liquidity needs, which is relatively a stable funding source as compared to mutual funds.

While most NBFCs were busy managing liquidity or raising funds in the last 4-5 months, MFIs continued to focus on growth. The same is evident in total gross loan portfolio of non-bank MFIs (NBFCs-MFIs), which grew 44 percent year-one-year to Rs 60,694 crore as of December 31, 2018.

Growth registered by NBFC-MFIs makes us scout for an idea in this space and we zeroed down on CreditAccess Grameen (CAGL), the third largest MFI in terms of loan book size as of March 31, 2018. CAGL, which listed in August last year, is a unique rural financial services play operating at the heart of rural India. It provides finance to the unserved masses at the bottom of the socio-economic pyramid.

But before getting into financials of CAGL, what's behind our interest in the microfinance sector, which historically have been on a roller coaster ride?

Microfinance sector on the growth path
The microfinance sector has come a long way from just a 'not-for-profit' endeavour to a business model of sustainable growth with positive returns. The remarkable journey has been marked by many highs and lows. The exponential growth of the sector was halted by the Andhra Pradesh crisis in 2010. The evolution of regulatory framework after the crisis helped the sector mature, while attempting to protect the borrower’s interest by regulating product pricing. While demonetisation disrupted the sector once again at 2016-end, MFIs speedily resumed the growth path, shrugging off the impact of demonetisation.

In addition to sector’s demonstrated resilience and growth potential, some of the structural changes has made microfinance a promising sector. The sector is thriving with eight MFIs converting into small finance banks (SFBs) and one of largest MFI (Bandhan Bank) transitioning into universal bank. Moreover, acquisition of Bharat Financial – the largest MFI -- by IndusInd Bank has added to the dynamism of the sector.

The marginal profile of borrowers, unsecured nature of lending and political risks remains key concerns for the sector.

Business model of CAGL
CAGL is an established player in the microfinance industry with over 19 years of operations. CreditAccess Asia NV, promoter of the company, holds 80.3 percent stake after the initial public offering (IPO). The Netherlands-based CreditAccess provides financial services to micro and small businesses and self-employed people, through controlled companies, in India, Vietnam, Indonesia and the Philippines.

CAGL has significant rural presence with close to 82 percent of the customers in rural areas. It primarily provides income generation loans to rural customers through the joint liability group (JLG) mechanism.

Credit risk, which is inherent in any financing business, is generally lower in case of lending through JLG. The access of personal information of each group member and social pressures are the key reasons for the same. However, the JLG model can prove to be a double-edged sword — containing risks in good times, but triggering large-sale defaults during a crisis.

Robust loan growth
Despite slowing down in FY17 due to demonetisation, CAGL’s loan book grew 57 percent compounded annually between FY14 and FY18. In FY19, its loan portfolio increased to Rs 6,085 crore as at December 31, 2018, growing 49 percent YoY. The management has guided to end FY19 with a gross loan portfolio of Rs 7,300-7,500 crore. 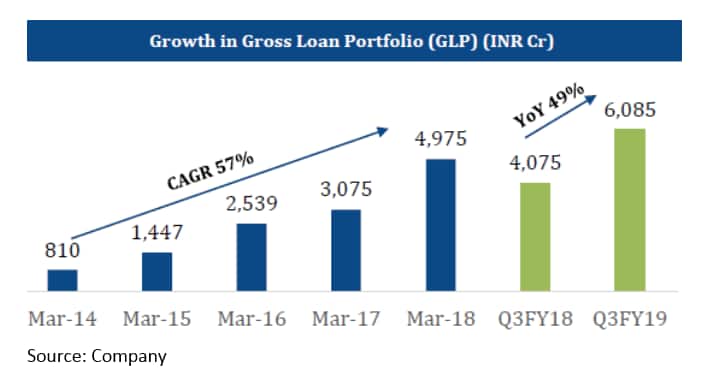 In the past, CAGL’s profitability was impacted with RoA falling to 2.3 percent in FY17 from 3.6 percent in FY16 on account of additional provisioning arising out of steep deterioration in its asset quality post-demonetisation. However, with an increase in currency circulation and the management’s focused collection efforts, asset quality improved in FY18.

With gross non-performing assets (NPAs) at 1.2 percent as at December 31, 2018, asset quality is currently reasonable. However, its asset quality remains highly vulnerable due to exposure to low income group. But predominantly, its week collection model, prudent customer on-boarding and monitoring provides comfort to an extent.

Valuation undemanding considering high earnings growth potentialWhile microfinance is a relatively riskier asset segment, with weak borrower profile susceptible to socio-political issues and the resulting unhealthy credit culture, few in the industry can boasts of a track record as CAGL.

At the current market price of Rs 474, the stock is trading at 2.4 times FY20 estimated book value. Given the strong earnings growth and ability to generate RoA of over 3-3.5 percent, valuations looks reasonable. Incidentally, the valuation of the last deal in this space between Bharat Fin and IndusInd Bank was at 3.8 times one-year forward book.

Though on a relative basis, valuation appears at a premium when compared to SFBs like Ujjivan Financial Services and Equitas Holdings' operating in the micro-lending space. While investors can play the sector through SFBs, a lower cost structure, higher returns and potential to convert or being acquired by a bank makes a pure-play MFI like CAGL a worthy contender and should support the stock's relatively higher valuation.

Long-term investors, with the ability to shoulder inherent risks associated with microfinance business and looking for high-quality business operating at the bottom of the pyramid, should buy the stock.