Many experts predicted low returns from market in 2018, and the forecast is turning to be accurate as we head towards the end of the year. The Indian benchmark indices are heading towards 2019 with flat-to-single digit returns and the broader markets are also expected to see a negative close.

The 30-share BSE Sensex has, so far, gained just 5.6 percent and the 50-share NSE Nifty, only 2.6 percent, in the current calendar year. Meanwhile, the BSE Midcap index and Smallcap indices have shed 15 percent and 25 percent, respectively.

After the spectacular run of 2017 when the Sensex and Nifty climbed around 28 percent each, it was obvious for the market to close the following year with single-digit returns given crude and rupee volatility, US-China trade tensions and state elections, experts said.

In 2017, midcap index rose 49 percent, while smallcap index shot up by nearly 60 percent.

In July 2018, Ratnesh Kumar, MD and CEO, BOB Capital had told CNBC-TV18 that the returns in 2018 could be in single digits. "I would still be happy if the market ended the year with single-digit returns."

The imposition of long-term capital gain tax in the Union Budget and the IL&FS-triggered liquidity crisis, which hit earnings in Q2 after good Q1FY19 performance, were among the biggest domestic reasons that dampened sentiment.

Crude is down only 4 percent year-to-date (YTD), but it rallied 29 percent to $86.29 a barrel (on October 3), the highest level since November 2014. This was followed by sharp correction with crude trading around the $60-mark now.

It was expected that majority of stocks will either turn flat or underperform in 2018, but there were still many that turned out to be wealth creators.

A little over one-fifth of BSE 500 stocks have given positive returns so far, while the rest have fallen between 1 percent and 90 percent.

Among stocks that are in the green, the top 15 have given returns of 40-76 percent, including many technology and consumption stocks.

Sharp rupee depreciation (down 12.6 percent YTD), improved earnings growth in major segment, and a strong US economy were among the factors that gave IT stocks a shot in the arm. The consumption numbers were good for 2018, and are expected to remain positive in the run up to the general elections in 2019. However, there are more wealth destroyers than creators in 2018. Weak corporate governance, high debts and liquidity crunch were among the major reasons for most of top 15 losers which corrected between 66 percent and 92 percent. 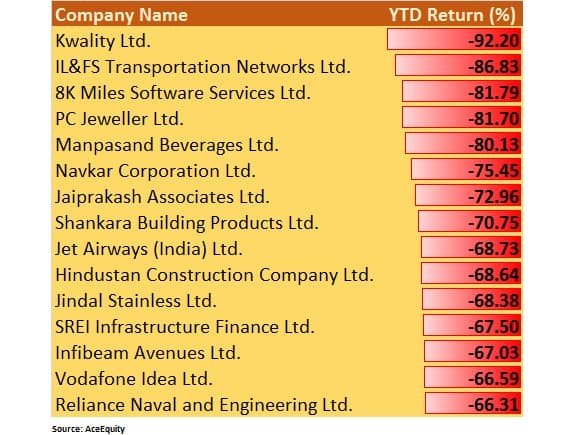 The best sectoral performers were private banks (up 7 percent), financial service (up 8 percent), FMCG (up 13 percent) and technology (up 27 percent).

The recent bout of volatility which started in 2018 is expected to continue in the first half of 2019, followed by relative stability in second half, experts said, adding that the market could touch record highs after the general elections.

Naveen Kulkarni, Head of Research at Reliance Securities said the massive victories in state elections still do not ensure that the Congress will have the requisite strength to form a stable government at the Centre post-2019 Lok Sabha elections Instead, they have managed to considerably weaken the ruling party’s chances of re-election.

This is an incremental negative for the market and will result in higher volatility over the next six months, resulting in further compression for market valuation multiples, he added.

At cap and theme levels, Vineeta Sharma expects very similar price returns in 2019 as unlike in the immediate past. The earnings growth of various subsections of the market, whether at cap level or at theme level, will be quite similar.
Sunil Shankar Matkar
Tags: #2018 Review #Market Edge #Nifty #Sensex
first published: Dec 17, 2018 09:59 am