Trade war fears spook markets! Do you own these top 50 stocks which fell 10-30% this week

The reaction to the US-China trade war on equity markets was nothing short of a bloodbath. Asian markets plunged while back home Sensex and Nifty recorded a cut of over 1 percent. The rout witnessed by the Indian market on Friday has eroded Rs 1.57 crore of investor wealth.

The Nifty50 saw its weakest close in the last five months for the week ended March 24. The index is down nearly 2 percent for the week and about 4.4 percent or 460 points so far in the month of March.

The index closed with losses of nearly 2 percent for the week ended March 23 but there were plenty of stocks which suffered double-digit fall of up to 30 percent.

As many as 50 stocks from the S&P BSE 500 index fell 10-30 percent in just five trading sessions which include names like JBF Industries which dropped 34 percent, followed by HCC which fell by 22 percent, MMTC was down by 19 percent, and Jaiprakash Associates slipped 18 percent in the same period.

Only 56 stocks out of 500 stocks closed in the green for the week ended March 23 which include names like Techno Electric & Engineering Company, Jubilant Foodworks, Marico, Radico Khaitan, Shilpa Medicare, JK Lakshmi Cement, Ashoka Buildcon, Cyient, etc. among others. 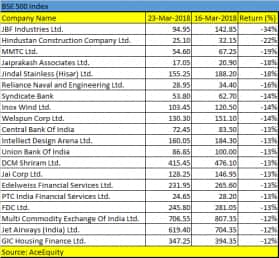 Markets across the globe including India suffered a knee-jerk reaction after US President Donald Trump signed a memorandum that could impose tariffs on up to USD 60 billion of imports from China.

Reacting to the news, China unveiled plans to impose tariffs on up to USD 3 billion of US imports in retaliation against US tariffs on Chinese steel and aluminium products which fuelled fears of other countries coming out with their own set of protectionism measures.

Richard Harris, Chief Executive, Port Shelter Investment Management in an interview with CNBC-TV18 is of the view that equity market is pricing in the bad news w.r.t possible trade war and equity markets are doing what they should be doing.

The reaction on equity markets was nothing short of a bloodbath. Asian markets plunged while back home Sensex and Nifty recorded a cut of over 1 percent. The rout witnessed by the Indian market on Friday has eroded Rs 1.57 crore of investor wealth.

The market capitalisation of BSE fell from Rs 140.87 lakh crore to Rs 139.3 lakh crore, thanks to the Sensex’s 500-point intraday fall. The Nifty managed to breach 10,000-mark and traded below it for a larger part of the day.

“Outflows amounting to over USD 200 million were seen from South Korea and Indonesia. Outflows continued from Brazil and Thailand that averaged USD 150 million. As visible, selling was not very pronounced from EMs,” Amit Gupta, Head of Derivative from ICICIdirect told Moneycontrol.

“In the F&O setup, positions were not that encouraging as FIIs created shorts worth over US$740 million that were also supported by index option buying of over USD 130 million,” he said.