The selling pressure continued for yet another session on April 6 as the benchmark indices fell nearly a percent, weighed by weak global cues owing to Federal Reserve governor's hawkish commentary, and FII selling. Private banks, financial services, IT and select auto & FMCG stocks were under pressure.

"A small negative candle was formed on the daily chart with minor upper shadow. This pattern confirms a short term top reversal at the swing high of 18,114 levels and a beginning of downward correction in the market. The overhead resistance of down sloping trend line seems to have acted as a crucial hurdle for the market and resulted in a trend reversal down," says Nagaraj Shetti, Technical Research Analyst at HDFC Securities.

Presently, Nifty is placed above the previous upside gap of April 4 at 17,800 levels.

Shetti feels the short term trend of Nifty seems to have reversed down and the downward correction is on the way. "There is a possibility of further weakness in the market down to 17,600 levels in the next few sessions. Confirmation of bearish Island Reversal could open more downside for the market."

In the broader space, there was an outperformance as the Nifty Midcap index was up 0.6 percent and Smallcap index gained 0.1 percent.

Maximum Call open interest of 21.99 lakh contracts was seen at 18,000 strike, which will act as a crucial resistance level in the April series.

Maximum Put open interest of 28.90 lakh contracts was seen at 17,500 strike, which will act as a crucial support level in the April series.

A high delivery percentage suggests that investors are showing interest in these stocks. The highest delivery was seen in Indus Towers, Honeywell Automation, ICICI Prudential Life Insurance, SBI Life Insurance Company, and Hindustan Unilever, among others on Wednesday. An increase in open interest, along with an increase in price, mostly indicates a build-up of long positions. Based on the open interest future percentage, here are the top 10 stocks including Torrent Power, Coal India, Aditya Birla Fashion & Retail, Indian Hotels, and Balrampur Chini Mills, in which a long build-up was seen. 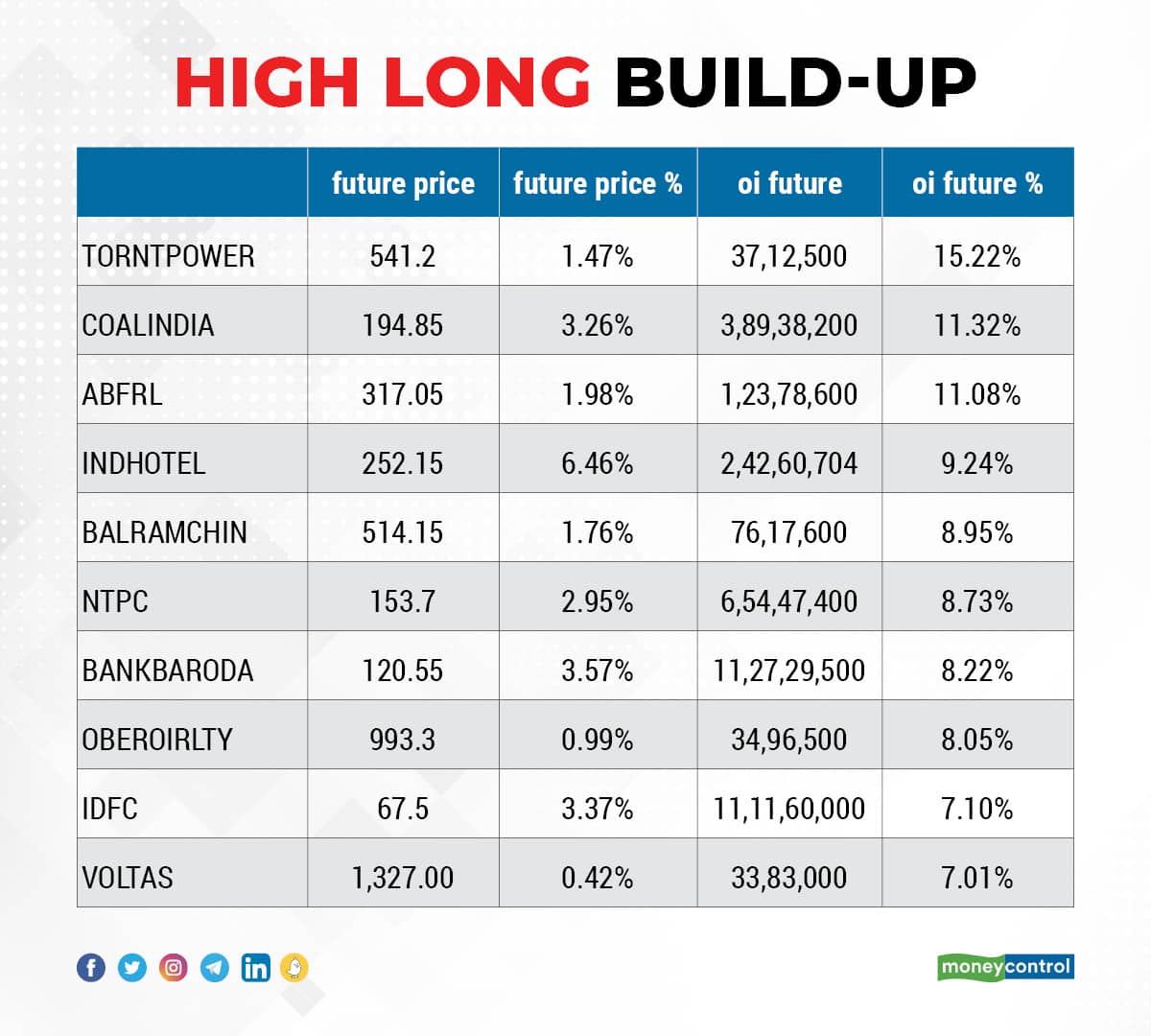 A decline in open interest, along with a decrease in price, mostly indicates a long unwinding. Based on the open interest future percentage, here are the top 10 stocks including Ipca Laboratories, GNFC, Bank Nifty, Syngene International, and Nifty, in which long unwinding was seen. 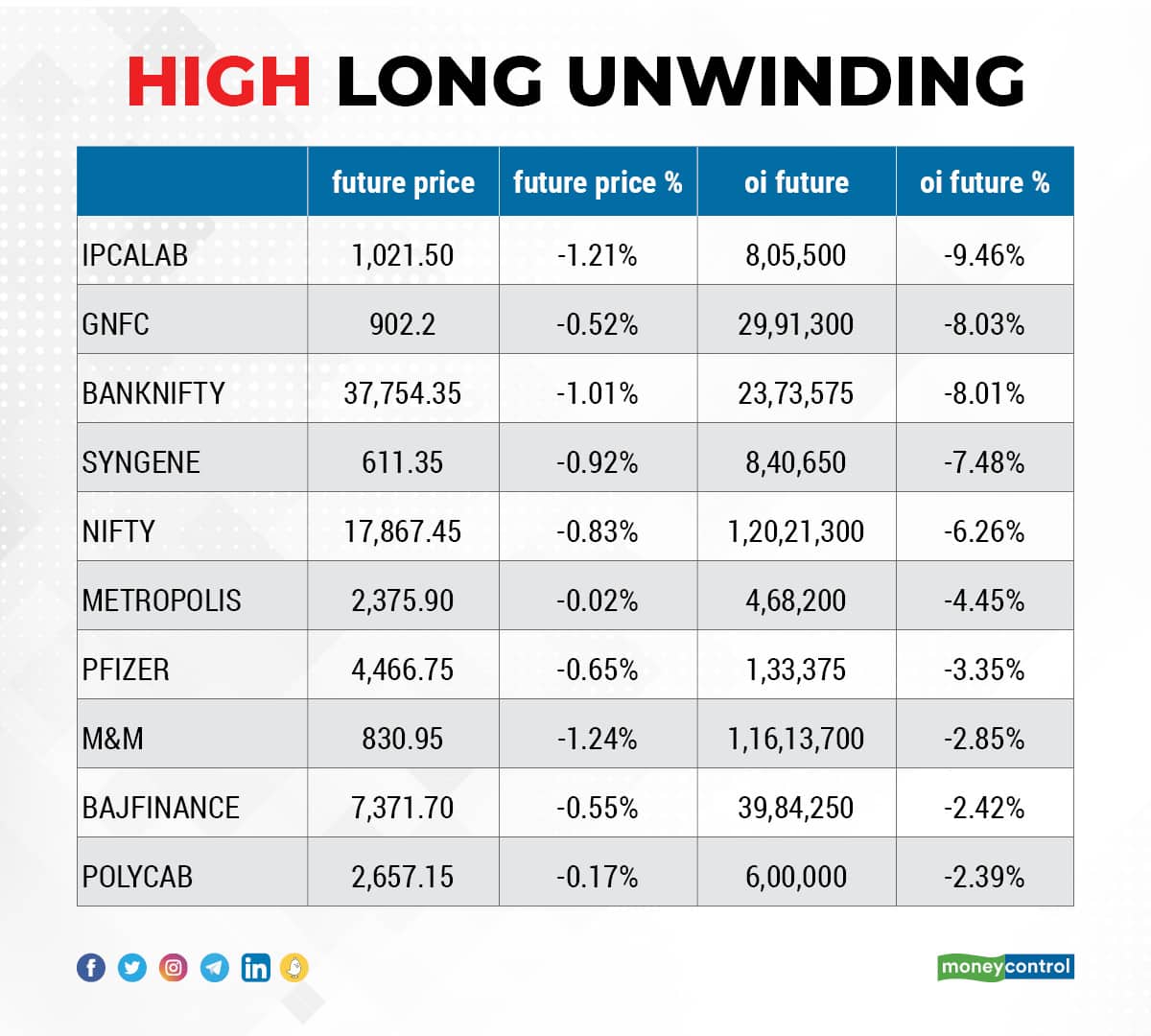 An increase in open interest, along with a decrease in price, mostly indicates a build-up of short positions. Based on the open interest future percentage, here are the top 10 stocks including Tata Motors, IRCTC, Indraprastha Gas, Dixon Technologies, and Torrent Pharma, in which a short build-up was seen. 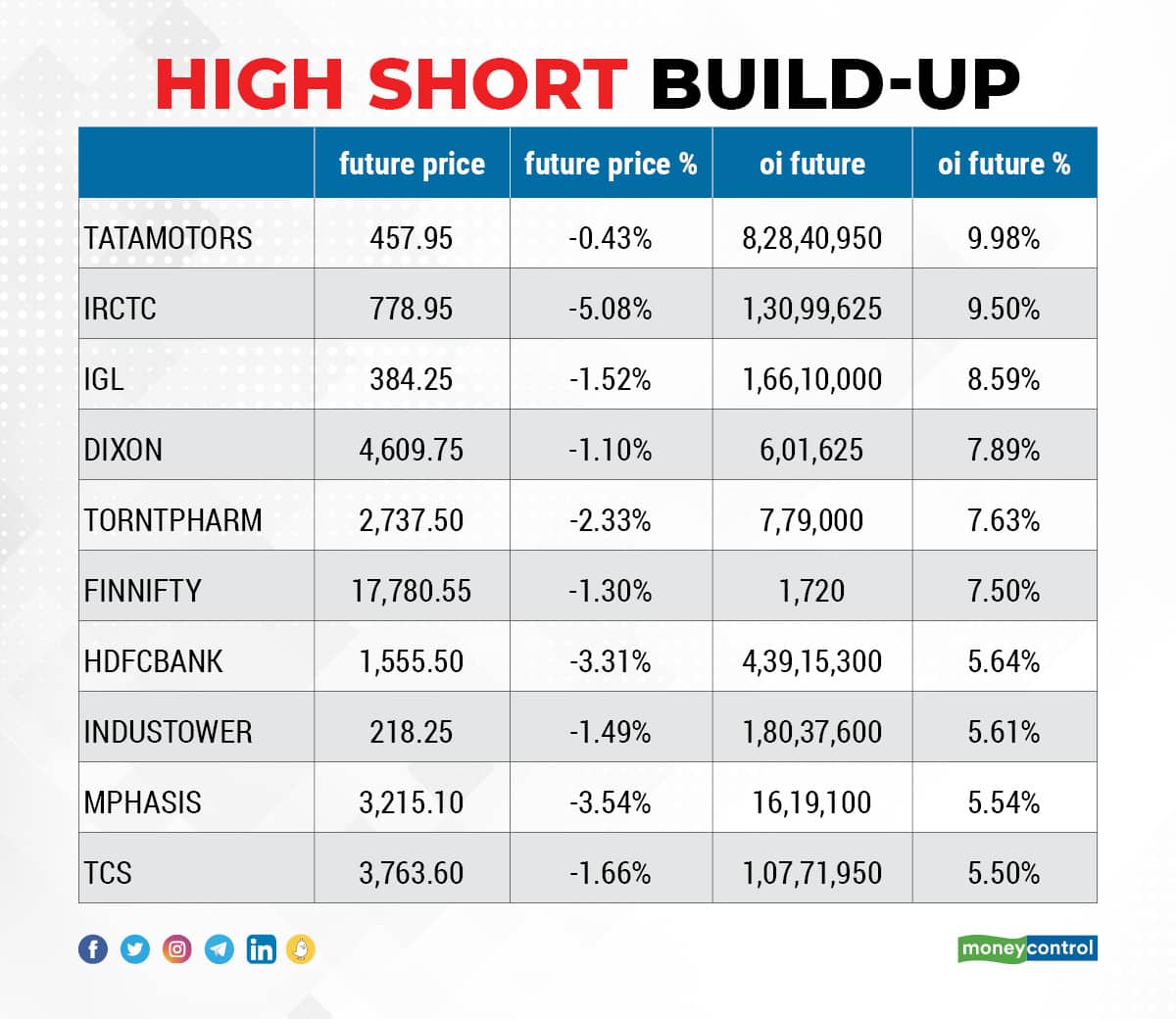 A decrease in open interest, along with an increase in price, mostly indicates a short-covering. Based on the open interest future percentage, here are the top 10 stocks including JK Cement, Intellect Design Arena, Coromandel International, Larsen & Toubro, and Ashok Leyland, in which short-covering was seen. 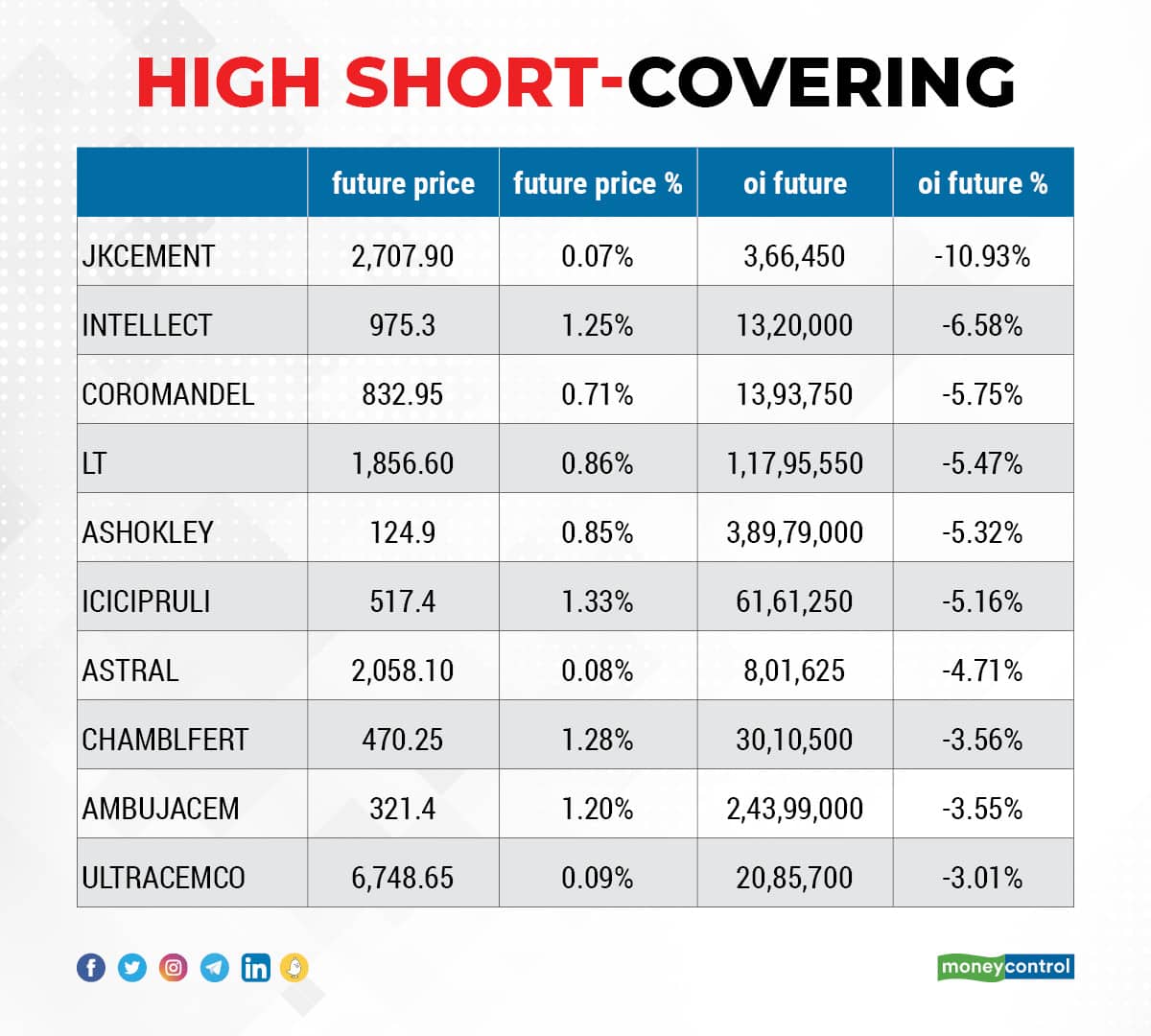 Aarti Drugs: The company's officials will meet investors and analysts.

SMS Pharmaceuticals: The company's officials will meet investors and analysts.

Welspun Corp: The company's officials will meet investors and analysts. Uma Exports: The company will make its debut on the bourses on April 7.

Godrej Consumer Products: In India, the company expects to deliver close to double-digit sales growth in Q4FY22, driven entirely by pricing. Personal Care sustained its double-digit growth trajectory, primarily led by pricing in Personal Wash, while Home Care witnessed a soft performance on a high base, impacted by a relatively muted season for home insecticides and the discretionary nature of air fresheners. In Godrej Africa, USA and Middle East, it continued growth momentum across most of key countries of operations and expects to deliver a constant currency sales growth close to the mid-teens.

Motherson Sumi Systems: The company has completed acquisition of a 55 percent stake in CIM Tools Private Limited, one of the leading suppliers in aerospace supply chain based in Bengaluru. CIM in turn holds 83 percent in Aero Treatment (ATPL) and 49.99 percent in Lauak CIM Aerospace (JV with Lauak International, LCA). The three founders, Srikanth GS, Umesh AS and Vishwanath Deshpande, retain the remaining 45 percent stake in CIM. Since the initial announcement in October 2021, CIM's order book has grown 26 percent to $252 million.

IDFC: IDFC and a consortium comprising Bandhan Financial Holdings, GIC and ChrysCapital have entered into a definitive agreement to acquire IDFC Asset Management Company and IDFC AMC Trustee Company, from IDFC, for Rs 4,500 crore. The company has declared an interim dividend of Re 1 per equity share.

Zee Entertainment Enterprises: Invesco Developing Market Funds will launch a block deal to sell 7.8 percent stake in the company on April 7, but will continue to hold remaining 11 percent stake. Invesco reaffirmed belief that Zee Sony deal has a great potential.

Not a single stock is under the F&O ban for April 7. Securities in the ban period under the F&O segment include companies in which the security has crossed 95 percent of the market-wide position limit.

Disclaimer: The views and investment tips expressed by investment experts on Moneycontrol.com are their own and not those of the website or its management. Moneycontrol.com advises users to check with certified experts before taking any investment decisions.
Sunil Shankar Matkar
Tags: #Market Cues #Market Edge #Nifty #Sensex #Trade Setup #video
first published: Apr 6, 2022 09:58 pm