Prabhudas Lilladher says that the current volatility should be used as an opportunity accumulate fundamentally strong stocks for long term.

Samvat 2074 was a good year for the equity market as benchmark and broader indices hit historic highs, but returns were in single digits. The Nifty, which was trading at 22.2 times forward earnings is now trading at 20 times.

The Sensex gained 8 percent, while Nifty surged 4 percent, but BSE Midcap and Smallcap indices, which rallied around 50 percent last year, underperformed with a loss of 8 percent and 16 percent, respectively.

Volatility in crude oil prices raised concerns of a widening fiscal deficit, weakness in the rupee, while trade tensions between the world's largest economies US and China, NBFCs liquidity crisis, Fed rate tightening etc dented sentiment. Yet, there was good news as the Street is hopeful of earnings recovery and consistent DII inflows continued to support the market despite FII outflow.

Coming to Samvat 2075, it is expected to be quite volatile year for the market due to states and general elections going ahead, but earnings recovery, economy growth and consistent DII flow are likely to come in defence, said experts who are positive on India's long term growth story.

"Going forward, we believe Indian economy has undergone tremendous structural change with reforms like GST and IBC. Also, we are on the cusp of earnings revival for Indian corporate. Profit of listed Indian companies as a percentage of GDP is at lows," Vineeta Sharma, Head of Research at Narnolia Financial Advisors told Moneycontrol.

She believes price growth in Nifty going forward will mostly come through earnings growth while valuation multiple will see continued contraction. "Nifty target for Samvat 2075 is 11,800 valuing it at 19times FY20 EPS of Rs 621."

Sumit Bilgaiyan, Founder of Equity99 said if the outcome of the elections is as per the expectations of the market players he expects a bull run post elections otherwise he believes that a market may see another 10-15 percent correction which shall recover towards the end of Samvat 2075.

Crude oil prices, which surged to highest level since November 2014, traded around $72-73 a barrel levels.

Sumit expects the crude to stabilise in the range of $72-75 per barrel and USD-INR is expected to stabilise around 71-72/dollar which shouldn't be a reason to worry for the economy.

Here is the list of top 15 Diwali phatakas which could give bomb like return of 30-70 percent by Samvat 2075-end: 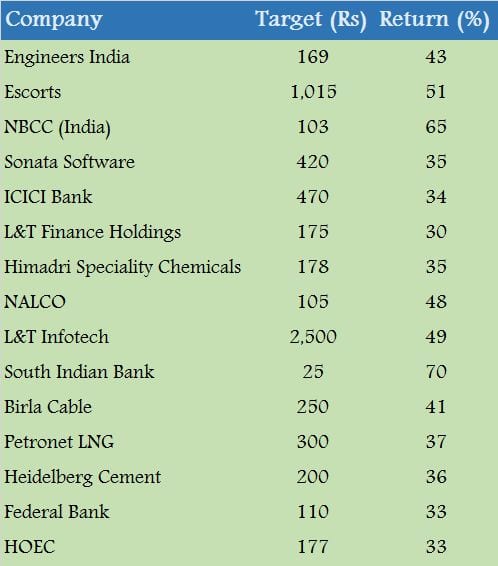 L&T Infotech (LTI) is India's sixth largest IT services company. We see the $1 billion threshold as a possible inflection point for LTI, with growth from (1) an increasing deal pipe, (2) deeper penetration in large accounts, (3) headwinds receding in the energy vertical and (4) improving quality of business (digital and platform-led growth) and (5) depreciating rupee.

Founded in 1929, South Indian Bank is one of the oldest banks based out of Kerala. With most of the provisioning of the stressed assets behind them and their focus on aggressively growing its retail book, we expect the growth story to start unfolding.

The bank is actively working towards its target of opening 150 new branches. As a result, we expect the loan book to grow at a 16 percent CAGR to Rs 72,810 crore by FY20, driven by a 21 percent CAGR in the retail book.

Further we expect NPAs to normalise to historical levels and, as a result, revenues are expected to grow at 14 percent CAGR.

Due to disruption in the channels of import of aluminium from Allunote and Rusal (owing to measures by government of India) the prices of aluminium went up leading to better realisations for NALCO. It is getting into various raw material related projects for better backward integration, these projects include a caustic soda plant and a newly conceived coal tar pitch plant.

Other than these, the company is also in the process of developing two coal mines, which were allotted to it. As far as volume is concerned, NALCO aims to achieve 2.1 million tonne alumina output and 415kt aluminium metal output in FY19.

The company plans to spend Rs 1,100 crore capex in FY19. We expect alumina prices to remain strong in the near to medium term, helping NALCO to put up a better performance.

Birla Cable (formerly known as Birla Ericsson Optical Limited) is a premier company in the field of telecommunication cables, which offers one of widest portfolio of copper and fibre optic cables under its umbrella.

The demand for optical fibre in India has already touched in 2017 to the tune of more than 28 million fibre kilometers as per the latest CRU reports and is expected to grow in a very brisk pace, riding on the wave of huge optical fibre network expansion projects by both government and private telecom operators.

Company has posted robust numbers for FY18 and Q1FY19. For Q1FY19, it has reported PAT of Rs 11.06 crore against loss of Rs 0.33 crore on 128 percent higher sales of Rs 117.48 crore. Technological changes and quality issue and competition are main risk factor for this industry.

The company has posted healthy growth in last four quarters and we are expecting robust growth in next 2-3 years, we recommend a buy on the stock with target price of Rs 250.

Federal Bank has up fronted its loan book growth by an average of 26 percent in the last 2 years. Refraining itself from lending riskier large corporate loans in last few years, management is focused on better rated corporate, retail and SME portfolio.

The company is debt free, with net cash balances of Rs 35 crore and Rs 53 crore invested in its subsidiary. Over the next two years, company expects significant ramp up in volumes which would ensure growth visibility going ahead.

We expect growth momentum to continue in the second half of FY19 as well. We estimate that the company will post Rs 208 crore revenues and Rs 133 crore PAT in FY20. Given strong management, a robust balance sheet and stellar growth expected over the next two-three years, we recommend buy on Hindustan Oil Exploration (HOEC) at Rs 130, and add on dips to Rs 108 with target price of Rs 177 till next Diwali.

PLNG is India's largest regasification player with capacity of 20 MTPA. PLNG is a play on rising domestic gas demand across user industries.

With large scale capex largely behind, cash flow generation will likely be robust. We have a DCF based price target of Rs 300.

HEIM is one of the largest players in the Central region, has witnessed a significant improvement in its operations over the last couple of years with the completion of its expansion-cum-modernisation program.

We continue to maintain that Central region holds the best outlook among the regions on the back of strong demand from infrastructure & affordable housing projects and limited capacity addition.

Led by strong outlook on Central region, quality operations and attractive valuations, we reiterate buy with target of Rs 200, EV/EBITDA of 9x FY20e.

Looking forward, need to kept an eye on NIMs trend as funding cost to go up due to which NIMs may come under pressure and we expect bank to deliver sustained improvement in operating metrics led by dwindling headwinds on asset quality front and improving balance sheet especially in Retail segment.

Bank to be a major gainer of current crisis in NBFC space, as it has best-in-class liability franchises along with superior customer outreach across business segments, helped the stock to outperform within whole sector & may continue in the coming period too.

Threats: Next half of financial year is expected to be challenging due to slow down in growth, increase in interest rates and liquidity squeeze following the default by IL&FS.

Company is leveraging its extensive experience as a well-diversified NBFC to focus on improving ROE after initial high growth. Company's strategy to focus on high–yielding rural products and low-risk housing & wholesale products help stabilise its asset quality while maintaining yields.

Having achieved ROE of 18.45 percent in Q1FY19, LTFH has maintained its profitability with 18.47 percent ROE in Q2FY19 on the back of AUM growth, strong NIMs plus fee income, strict control on cost and improved asset quality . LTFH’s gross stress loan ratio improved from 7.93 percent in Q1 FY19 to 7.1 percent in Q2 FY19.

With its focused management and strong execution skills, company is set to deliver an 15-18 percent loan CAGR over next two year driven by growth in rural and housing finance segments. In addition, continued origination and down-selling in infra finance book will drive company’s fee income traction, resulting in an elevated ROE.

Although, recent events in financial markets have had a bearing on the NBFC sector, there could be new RBI regulations on various aspects including ALM. Given its strong parentage and multiple financial relationships, LTFH would come out of this situation better than most peers.

HSCL, the only Indian player manufacturing advance carbon material and one of the very few global corporations to make anode material using coal tar. It have built a very strong market presence in existing products like coal tar pitch, carbon black, naphthalene, SNF etc which are the existing core businesses around which the Company has delivered strong set of numbers. It had Doubled naphthalene capacity and an SNF manufacturer(to benefit from anti-dumping duty on Chinese chemical import) with an installed capacity of 68,000 MTPA , will give a room to replace imports in the country.

As one of the only three producers of anode material through the coal tar route, Himadri is expected to benefit from the exponentially rising demand. Recent expansion in this segment will add on share of value-added products and further strengthen profitability.

We expect the MS Alliance to be a key growth driver, and Sonata has conducted MS showcases in Dubai, London, the US and India, and won deals as well. Acquisitive opportunities are also being closely evaluated with potential $5-25 million size, mainly in the MS ecosystem.

We believe ENGR will remain highly cash-rich and maintain its dividend payout of around 50 percent during FY18-20E. At CMP, the stock trades at 17.0x FY19E and 13.9x FY20E earnings respectively.

attractive valuation for investment. We maintain our BUY recommendation on the stock with a target price of Rs 169.

Looking forward, we expect ESC’s revenue to clock 16 percent CAGR through FY18-20E, supported by incremental revenues from spares and new segments, its EBITDA margin is expected to expand to 12.1 percent in FY20E from 11.2 percent in FY18.

We continue to view NBCC as a robust growth story owing to its PWO status and niche presence in redevelopment of government’s old colonies. Further, a debt-free balance-sheet and superior return ratios augur well for the company.

Following sharp correction in last four months, current valuations at 23x and 16x EPS FY19E and FY20E, respectively appear to be attractive. We maintain buy recommendation on the stock with a target price of Rs 103.

Disclaimer: The views and investment tips expressed by investment experts and brokerages on moneycontrol.com are their own and not that of the website or its management. Moneycontrol.com advises users to check with certified experts before taking any investment decisions.
Sunil Shankar Matkar
Tags: #Market Edge #Nifty #Recommendations #Samvat 2075 #Sensex #Stocks Views
first published: Nov 7, 2018 09:10 am