The S&P BSE Small-cap index rallied nearly 5 percent while the S&P BSE Mid-cap index closed with gains of over 3 percent for the week ended August 7.

Bulls remained in control of D-Street with benchmark indices rallying over 1 percent each during the week ended August 7, but the real action was seen in the small & midcap space.

The S&P BSE Small-cap index rallied nearly 5 percent while the S&P BSE Mid-cap index closed with gains of over 3 percent for the week ended August 7. 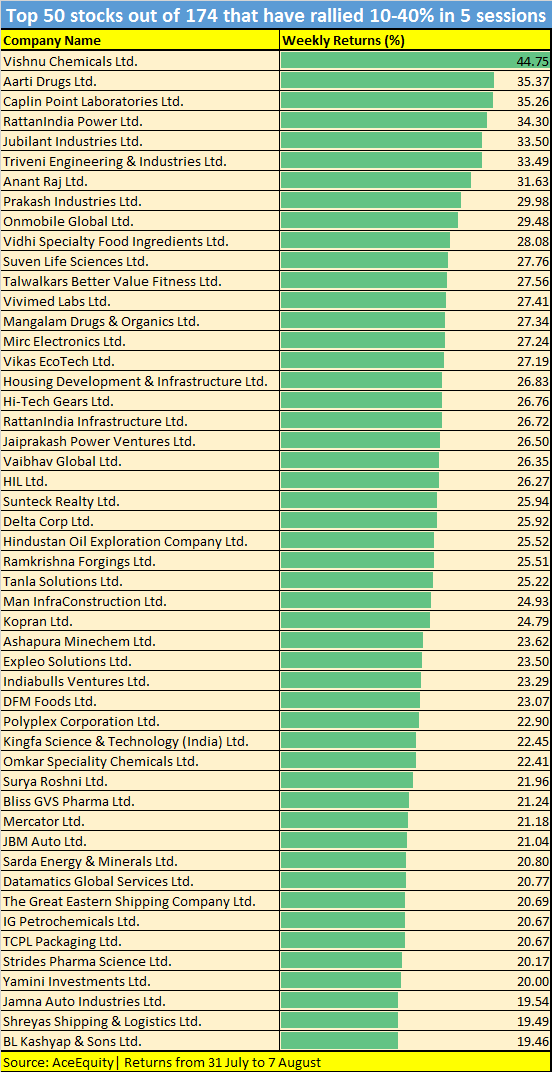 Tracking positive global cues, the Indian market crossed crucial resistance levels. But, the rise in COVID infection capped the upside, but hopes of a rate cut from the Reserve Bank of India helped the sentiment.

Most stocks are from the small & midcap space. The smart money seems to be moving in the broader market space largely on account of underperformance as well as high liquidity which is chasing growth, suggest experts.

“Undervaluation and flush of money are prominent reasons why we are seeing a rally in the broader markets. Mid and smallcaps are catching up with large caps and investors are looking for stocks which have underperformed as they are reluctant to chase stocks at such steep valuations,” Sacchitanand Uttekar – DVP – Technical (Equity), Tradebulls Securities told Moneycontrol.

“Also, the recent upward revisions in the circuit filter changes seems to have added that extra pedigree for most of the quality midcaps. We are yet to see any recovery in the economy after going through this pandemic so clearly investors are not eyeing any growth when buying small and mid-cap stocks. It’s just rising tide backed by liquidity that is lifting all boats in this scenario,” he said.

The Nifty50 closed with gains of over 1 percent above 11.200 levels. Broader markets outperformed on expected lines as Nifty Mid-cap and small-cap indices gained 4 percent and 5 percent, respectively, for the week.

The weekly price action of Nifty resulted in a Bull candle with a lower high-low, indicating a breather after 19 percent rally in the preceding seven weeks.

Experts feel that any dip from here should be used to buy. On the higher side, the next crucial target for Nifty50 is placed at 11,400 while 10850 will act as a support.

“We reiterate our stance of outperformance in mid-cap and small-cap space while Nifty undergoes a healthy consolidation in the broad range of 10900-11400. Such consolidation will make a larger price structure more robust as indices will re-establish a higher base which will act as a launchpad for next major up move,” Dharmesh Shah, Head – Technical, ICICI direct told Moneycontrol.

“We believe ongoing temporary breather after past seven weeks 19% (9544-11340) rally will help weekly stochastic to cool off from overbought trajectory which will count as added positive in technical terms,” he said.

Shah further added that any dip from hereon should not be construed as negative, instead should be capitalised as an incremental buying opportunity in quality stocks with a focus on midcap and small caps to benefit from their outperformance.
Disclaimer: The views and investment tips expressed by experts on Moneycontrol.com are their own and not those of the website or its management. Moneycontrol.com advises users to check with certified experts before taking any investment decisions.