Small & Midcap Mantra | RITES: Analysts bullish on this underperformer on the verge of a breakout

The stock started rallying since May 8 and it has risen over 12 percent now. RITES is on track to retest its 52-week high of Rs 292, and the record high of Rs 331. Based on chart trends, it could possibly hit Rs 420 in 6-12 months, says an analyst

Rail India Technical and Economic Service (RITES) has remained flat in 2021, despite the smart rally seen in the S&P BSE 500 index as well as the Nifty50, which are up 16 and 12 per cent, respectively, so far this year.

However, RITES started rallying since May 8 and it has risen over 12 percent. During this period, the Nifty gain has been 6 percent, and it has caught the attention of technical experts.

The recent spike pushed the stock closer to its 52-week high of Rs 292, which is 9 percent from Tuesday’s closing price of Rs 267.95 on the BSE.

RITES is a wholly-owned subsidiary and an engineering consultancy corporation, specialising in transport infrastructure. It is a government of India Enterprise under the aegis of the Indian Railways.

“In the last couple of days, railway stocks, with a positive momentum, have been in focus. This week, RITES, too, witnessed buying interest and it is poised for a trendline breakout,” Jatin Gohil, Technical and Derivatives Research Analyst, Reliance Securities, said.

“In this week, the stock bounced back and rose to a 14-week high of Rs 271.80, and has so far gained 7.56 percent. The above-average volumes and rise in price signal an increase in buying interest. Its RSI is positively poised and witnessed a trendline breakout,” says Gohil. 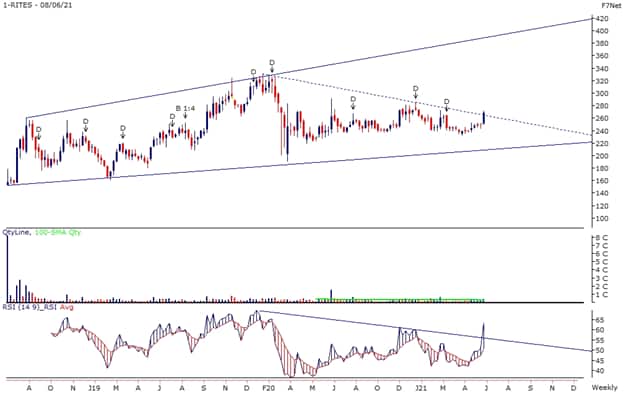 He believes a trendline breakout could take the stock towards its life-time high of Rs 331 initially, and its upper band of the rising channel (Rs420) in the next 6-12 months.

After showing a range movement in the last few weeks, the stock price has moved up sharply and is now placed to stage an upside breakout of a triangle-type pattern.

“A sustainable move above Rs 265 could open a potential upside pattern target of around Rs 290 and higher over a period of time,” Nagaraj Shetti, Technical Research Analyst, HDFC Securities, said.

“The weekly 14 period RSI is making an attempt to move above the 60 levels. The overall chart pattern of RITES indicates a long trading opportunity. One may look to create a positional long for a target of Rs 280 in the next 2-3 months. A stop can be placed below Rs 232," he recommends.